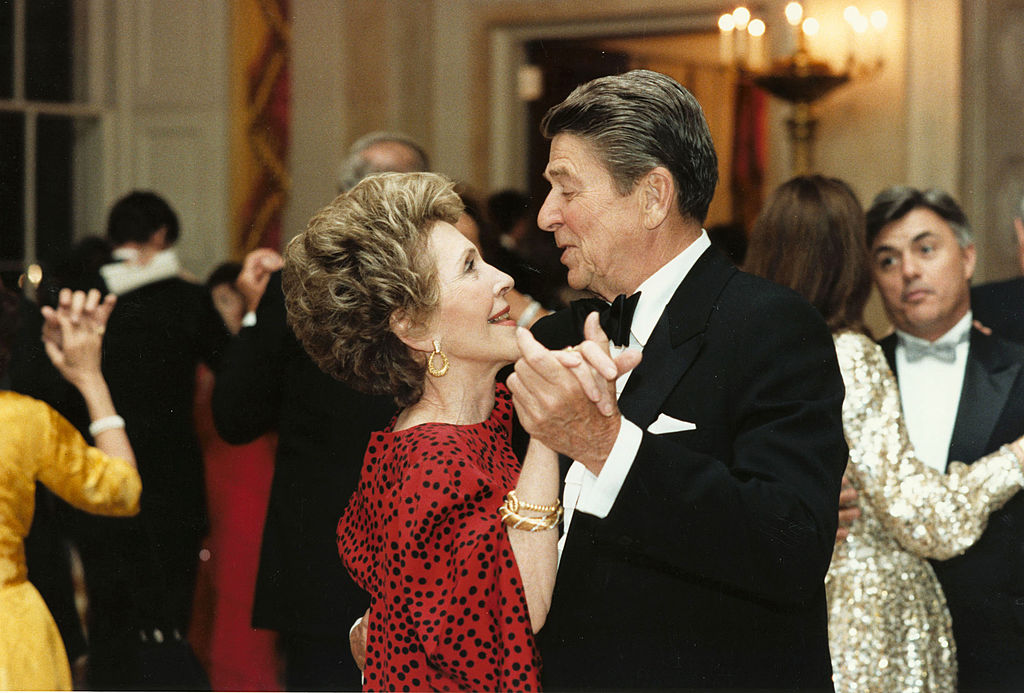 When it comes to style, very few First Ladies cut as striking a fashionable figure as Nancy Reagan. Jackie Kennedy brought a youthful sense of optimism when she entered the White House and Michelle Obama embodied a modern and effortless style – a mix of designer and mall store brands – to her tenure. But Reagan was a formidable fashion figure.

The former First Lady, who passed away on Sunday at age 94 of congestive heart failure, left a legacy of unerring style and unapologetic glamour to the years she occupied the White House from 1981 to 1989. From the moment her husband, Ronald Reagan, the 40th President of the United States took office, she set about redecorating the White House – amid much criticism – but it became a showcase for to display her sense of diplomacy, grace and elegance to the world. During the eight years they occupied the White House, she hosted 56 State Dinners.

The 80s might have been the era of conspicuous consumption but Reagan also showed patriotism by championing many American designers, such as James Galanos, Oscar de la Renta, Bill Blass and Geoffrey Beene. Oscar de la Renta noted, “What better endorsement for our industry than to have a wonderfully well-dressed First Lady?” And he wasn’t the only one in the American fashion industry who had a great deal of admiration for her. The Council of Fashion Designers of America awarded her a Lifetime Achievement Award in 1988.

For her part, Reagan, simply noted her style amounted to not liking a lot of frills and fusses, as she said in an interview with W magazine in 2007. “I’ve always gone for the more understated look.” Perhaps a wise move, considering she was petite size 2 at 5’4″ and it was an era where big shoulders and big hair reigned.

But as diminutive as she was, Reagan favoured bold red, so much so, the colour became her signature and was known as Reagan Red. “It’s a picker-upper,” she once said of the colour. Even in her later years, she still wore the striking colour, as she did, wearing a cherry red pant suit by Adolfo for a visit to the White House in 2009.

As she once told Time magazine, “I try to choose clothes that look good today but that will also look good tomorrow.”

Click through for a look back at her legacy of style. Newly elected President Ronald Reagan dancing at The Inaugural Ball in 1981 with Nancy Reagan, wearing a gown by James Galanos. Nancy Reagan with Diana, Princess of Wales, at the Springfield Drug Rehabilitation Centre in November, 1985. So famous was Reagan’s love of red, it was said Diana wore the red silk kerchief as a token to her host. Nancy Reagan and her husband, actor Ronald Reagan, at the premier of The King and I in Los Angeles, 1956. Nancy Reagan and President Ronald Reagan wait for the arrival of a Head-of-State guest at the North Portico of the White House in Washington in this undated photo. President Ronald Reagan and First Lady Nancy Reagan at a State Department Dinner honouring the King of Spain and his wife in 1984. First Lady Nancy Reagan and President Reagan with Prince Philip, Duke of Edinburgh and Queen Elizabeth II at a banquet on March 5th, 1983 in San Francisco. Nancy Reagan and Ronald Reagan attend the opening night of Sunset Blvd on December 9th, 1993 at the Shubert Theater in Century City, California.