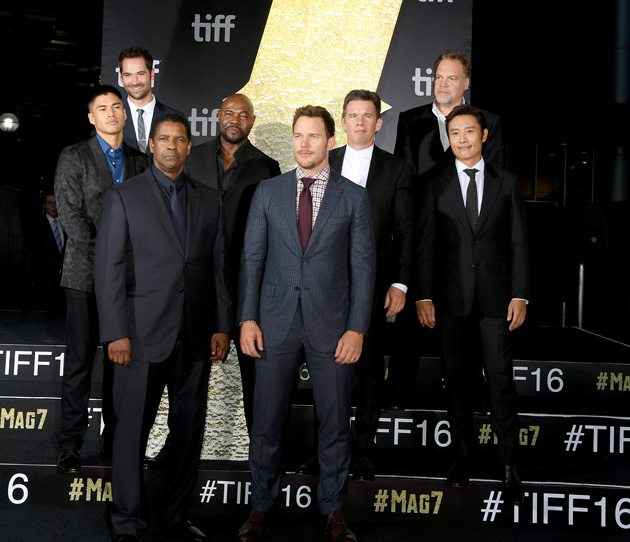 The stars aligned at the opening night of TIFF when the (nearly) all-male cast of The Magnificent Seven stepped onto the red carpet last night at Roy Thomson Hall. So much swagger, so little time.

Click through for some of the cast’s red carpet looks.

Ethan Hawke, the Eternal Hipster, displayed his famous sunken cheeks and come-hither-to-my-90s-coffee-shop gaze that made more than a few fans swoon. Missing in action? His trademark facial whiskers—goatee, stubble—have been swapped for a clean-shaven baby-smooth complexion. The talented thespian and author was Oscar-nominated for Boyhood, directed by frequent collaborator Richard Linklater.

We found Ethan Hawke’s stubble! Chris Pratt stole his co-star’s grunge facial hair and rolled out of bed-head for the red carpet. Pratt is Hollywood’s latest “It-Boy”  thanks to mega-hits Jurassic World and Guardians of the Galaxy. Look for him to appear in sequels to both in the near future. And, as an aside, who needs a tux when you’re this adorable?!

Let’s hope this look is for an upcoming role. How else to explain the normally suave Peter Sarsgaard who sports a rather unkempt, homeless look. Mind you, he does play the villain in the film, but is that any reason to be the bad guy in the grooming department?

The film’s star, Denzel Washington, mops his brow on the red carpet. Either the humid night and hot lights got to him or he just saw Peter Sarsgaard’s beard. The Magnificent Seven is Washington’s third film with director Antoine Fuqua. Training Day (which also starred Ethan Hawke) and The Equalizer were both box-office hits and early predictors have this latest film is following suit.