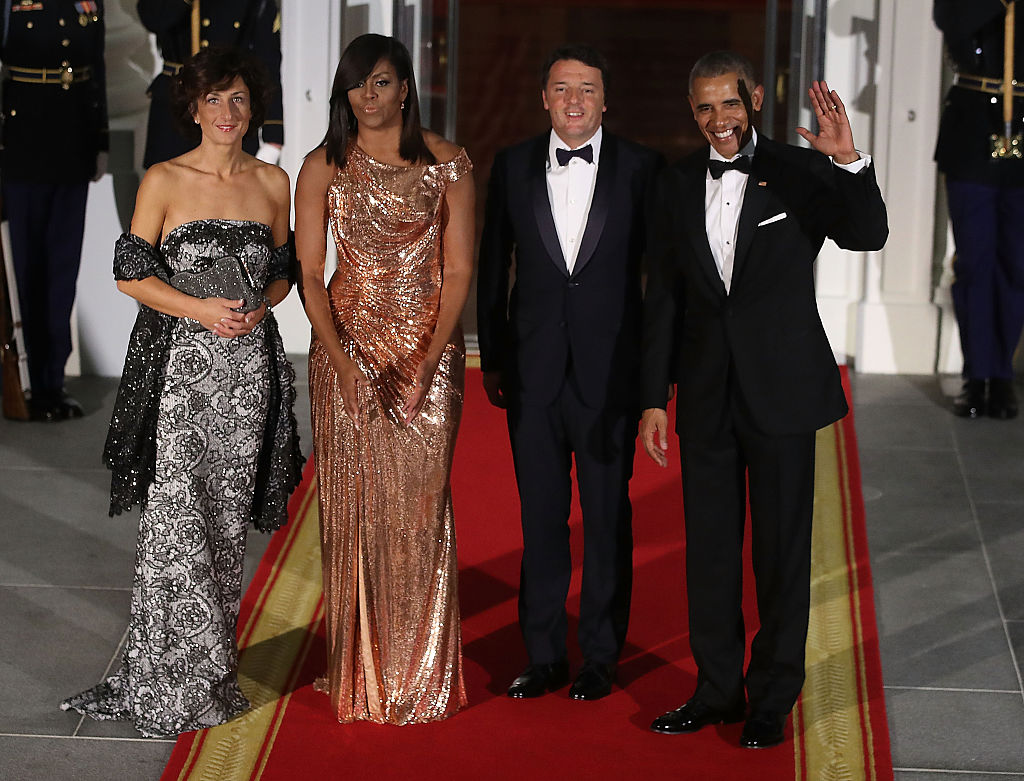 In honour of Michelle Obama’s 53rd birthday (January 17), we look back at some of her top fashion moments.

For her final state dinner appearance, Michelle Obama capped an eight-year tour de force era at the White House in a stunning rose gold gown, which cemented her status as one of the most stylish First Ladies who resided at 1600 Pennsylvania Avenue.

The custom made gown by Atelier Versace not only paid homage to the heritage of Italy’s Prime Minister and his wife – the guests of honour of this 13th and final Obama state dinner held this past Tuesday – but the ultra-glam gown, in many ways, represented the legacy Mrs. O is leaving behind.

The designer of the dress, Donatella Versace wrote on Instagram, “I am humbled and honoured to have had the opportunity to dress the First Lady of the United States, Michelle Obama. Thank you Michelle, for all the things you have done for America and for the world, and especially, for empowering and inspiring women everywhere.”

Since occupying the White House, Michelle Obama has carved out a unique perspective – sartorially speaking – that has redefined traditional First Lady attire.

She is probably one of the first that cultivated a White House wardrobe that mixed Haute Couture labels like Alexander McQueen with inexpensive mass market brands like J.Crew. She championed young American designers – many unknown – by not only wearing their clothes but also included them in guest lists to White House events.

Her style, whilst at times glamorous and sophisticated, was also approachable and relatable to most women. She was not afraid of bold colour and prints, would wear jeans and sneakers when the occasion called for it and didn’t think twice of wearing an outfit more than once.

Her sense of style was exhaustively chronicled and was punctuated with many stellar fashion moments.

This final state dinner outfit, the Versace chain mail gown, perfectly encapsulates the kind of woman and legacy she is leaving behind. It shows the world that, yes, you can be a beautiful woman, embrace fashion, yet be strong — and while you might be standing next to your husband, the most powerful man in the world — you can still shine in your own right and command attention.

Scroll through for some of FLOTUS best state dinner looks over the past eight years. For her first state dinner as First Lady back in November 2009, Michelle Obama clearly signaled a new, modern and stylish era was being ushered in the White House with this yellow gold gown by Indian American designer Naeem Khan. Strapless and baring her toned arms, (copious amount of flesh, one might say for a First Lady) the gown was a radical departure from ambassadorial attire and looked more akin to what an A-list Hollywood actress might wear on a red carpet. But FLOTUS from the get-go, set her own sartorial agenda – she would be doing things her way and knew what best suited her.

And she deftly showed she knew a thing or two about fashion with this outfit. So often the best dressed of us, in trying to pay homage to a particular culture, especially one as rich in embellishment and colour as India, might be tempted to go overboard. But she kept it all very simple – a stack of bracelets on one arm, a plain chiffon wrap  and a graceful up sweep of her hair – said this was a modern take on sari dressing.

The choice of designer was a nod to the guest of honour that evening – India’s Prime Minister Manmohan Singh and his wife  Gursharan Kaur – and in the years to follow, Mrs. O would continue that tradition of wearing a designer that reflected the heritage of the visiting dignitaries. Mrs. O is a woman who clearly knows her best assets and plays it up. This gown by designer Peter Soronen – as seen here at the Mexico State Dinner in May 2010 – features several of her signature style elements such as her penchant for baring her famously toned arms and her love for jewel colours. Often her gowns or dresses might feature a one-shoulder style or a bit of asymmetry with the neckline and such visual tricks helps balance out her broad shoulders. She also loves a wide and strong looking belt which always helps to define anyone’s waistline.

Ditto again in October 2011 for the South Korea state dinner where she wore a gown by Korean-American designer Doo-Ri Chung that featured all her favourite style elements – jewel tone, one-shoulder, asymmetry neckline and a belt, even for evening wear. Clearly, the number one style lesson from Mrs. O. that anyone can use is – identify your best features and dress to suit your body type. Master that and you’ll be able to conquer any wardrobe puzzle. One of her more dramatic White House state dinner outfits, this ball gown by British label, Alexander McQueen drew some criticism back in January 2011. This particular state dinner was in honour of Chinese President Hu Jintao and a few American designers felt she should have worn a Chinese or Asian American designer – of which there are many in New York – instead of a British label. A perfect example of the old adage that you can’t please all the people all the time. Mrs. O has worn many Asian designers in the past – including Jason Wu for the inaugural balls.

Instead of paying homage to China via a designer, Mrs. O. changed things up and went with the colour – the fiery red being a popular and meaningful hue in Chinese culture. It’s also somewhat of a savvy style move on her part – while you can show up in all the right things and tick all the right boxes on the fashion agenda, sometimes we forget one the simplest – and most powerful – things we can do with our wardrobe choices is to go off-script with the unexpected and take a calculated style risk. Eight years in the White House and FLOTUS never seem to have fallen into a rut – at least not with her wardrobe choices. Seen here with Samantha Cameron, wife of British Prime Minister David Cameron, at the state dinner in March 2012, Mrs. O. wore a navy Marchesa gown. While the gown was simple to the point of rigid austerity, she added a feminine and delicate statement to the look with a Tom Binns necklace which featured multiple strands of beads. The message here seems to be to keep the exclamation point in an outfit to a single item. At the state dinner for French President Francois Hollande back in February 2014, FLOTUS went for full scale drama worthy of the nation that takes all credit for all things fashionable. The ball gown by American designer Carolina Herrera had the air of romance and decadence usually associated with the Haute Couture collections of Paris. But Mrs. O. carried it off with a non-fussy or weighty feeling by keeping accessories to simple hoops and her hair, instead of a matronly updo, kept it easy and breezy looking. A modern but very American way of taking the stuffing out of an outfit that could have easily fallen into pomposity. But when Mrs. O arrived at the White House, she went against convention and instead of the legacy brands, opted for younger designers. This was cause for much lamenting by designers like Oscar de la Renta. While Mrs. O. did finally wore one of his designs, imagine how Oscar’s very elegant and gentlemanly sensibilities would have been shaken if he was still alive to witness Mrs. O. wearing a gown designed by Brandon Maxwell – best known as Lady Gaga’s designer.  Here at the state dinner for Singapore Prime Minister Lee Hsien in August 2016, Mrs. O. played off script and convention and took a chance with the young forward thinking designer. The cream gown was striking and modern and played along with Mrs. O’s favoured style elements – bare arms and cinched waist. Sometimes in fashion, you have to take risks. Saving the best for last, FLOTUS went out on a high glittering perfect note at the last Obama state dinner this week for Italian Prime Minister Matteo Renzi and his wife Mrs. Agnese Landini. The custom made Versace gown in rose gold chain mail, was a master class example of draping. Subtle and graceful, the draping gently hugged Mrs. O’s curves while the colour illuminated her skin tone. And because the magnificence and beauty of this gown is the material and draping, she let it rule by keeping accessories to a bare minimum and her hair and makeup simple. But once again, Mrs. O took an unconventional fashion brand – one that is associated with glamazons, rock ‘n roll and nubile starlets, not to mention a material: chain mail and made it work in Washington.