The Sporty and Sexy Style of France’s Next First Lady 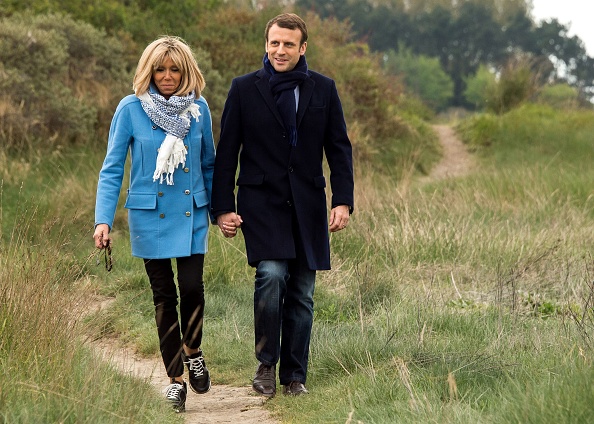 Brigitte Marie-Claude Trogneux is poised to become the next first lady of France now that her husband, Emmanuel Macron, has been elected president.

Much has been written about the salacious details surrounding the marriage of Trogneux and Macron. The ambitious centre-left presidential candidate Macron, 39, first met his wife when he was just 15 years old and she was his drama teacher at the Catholic school he attended in the small northern French town of Amiens. At the time, she was a married woman with three kids and came from a wealthy family known for their chocolatier business. She’s also 24 years his senior.

One of Trogneux’s daughters was in the same class as Macron and, initially, his physician parents thought she was the object of his affections—not her mother. His parents then promptly sent him away to Paris to complete his studies, but Macron vowed to return and wed his first love. Thirteen years later, he kept his vow and married the divorced Trogneux in 2007.

The svelte French woman, with the beautiful mane of blond hair, is now 64-years-old and a grandmother of seven. And she now finds herself in the international spotlight ahead of the May elections. She’s expected to take an active role in her husband’s political career if he wins and takes up residence in the Élysée Palace.

But if you look past her relationship and its controversial origins, you’ll find an intelligent, glamorous and fashionable public figure. It’ll be interesting to see how her style develops as she settles into her role as first lady of France because one thing is clear—Madame Trogneux is not interested in being portrayed as the classic soigné French woman dressed in timeless Chanel suits and demure pearls.

Her look is a mix of sporty, modern and feminine with light lashings of sex appeal. Her skin might look heavily tanned, but it looks like it came from healthy outdoor activity. She keeps her mop of hair an unapologetic shade of blond. Her body is lean and she’s not afraid to play up those features with short dresses, bare arms and snug-fitting jeans and leather pants. Through her style, we see a vital, vibrant and stylishly modern woman.

Scroll through our slide show below for a breakdown on Brigitte Trogneux’s style. During a state dinner this past March in Paris for Queen Maxima and King Willem-Alexander of the Netherlands, Brigitte Trogneux accompanied her husband, Emmanuel Macron, the French Minister of Economy to the Elysee Presidential Palace. It’s clear Trogneux is a confident and self-assured woman when it comes to fashion. Wearing a cream lace cocktail dress, she plays up one of her best features—her legs. Her dress rests above the knees but the dark tights add a touch of formality for the occasion. She deftly understands playing with proportions and mixing textures. By pairing a long coat, in a more luxe looking material, over her short lace dress she also keeps the outfit from looking too girlishly young.

Here, she shows an enthusiastic interest in fashion (not surprising since the French practically consider fashion part of their cultural landscape and heritage) by attending the Fall/Winter 2016/2017 Louis Vuitton show this past March. While her leather pants are legging-slim, she shows decorum and elegance by pairing it with a long coat and long sweater that falls below her hips. There is no shameless exposure of a leather clad derrière—a style move best reserved for the Kardashians. Again, the focus is on Trognuex’s legs as she wears denim on the campaign trail in April in the Pyrenees. Her jeans are well cut but slim-fitting and in a stylish shade of indigo. It’s a worthwhile fashion message when it comes to older women who want a great pair of jeans—avoid any sort of tricky denim treatments. What does that mean? It means, no rips, no embellishments and no fading out. Stick to dark indigo or light blue and opt for a high waist but slim leg or at least one that tapers to your ankle. And her leather motorcycle boots is not only a youthful, yet sexy, touch but they fit perfectly with the casual vibe of her surroundings. Every woman knows the importance of keeping at least one little black dress in her wardrobe. It’s a proven life saver on many occasions. Whether or not Trogneux had to throw on a quick outfit for this state dinner back in June 2015, she makes the LBD look effortless yet sexy. One assumes the summer heat in Paris made her forgo tights and she took a fashion risk with a short above-the-knee dress for a formal event. But it works because her legs are in good shape and she punctuates the look with striking pair of red heels. The outfit might be a lesson in chic simplicity, but Trogneux knows that sometimes you need just a touch of sex appeal.