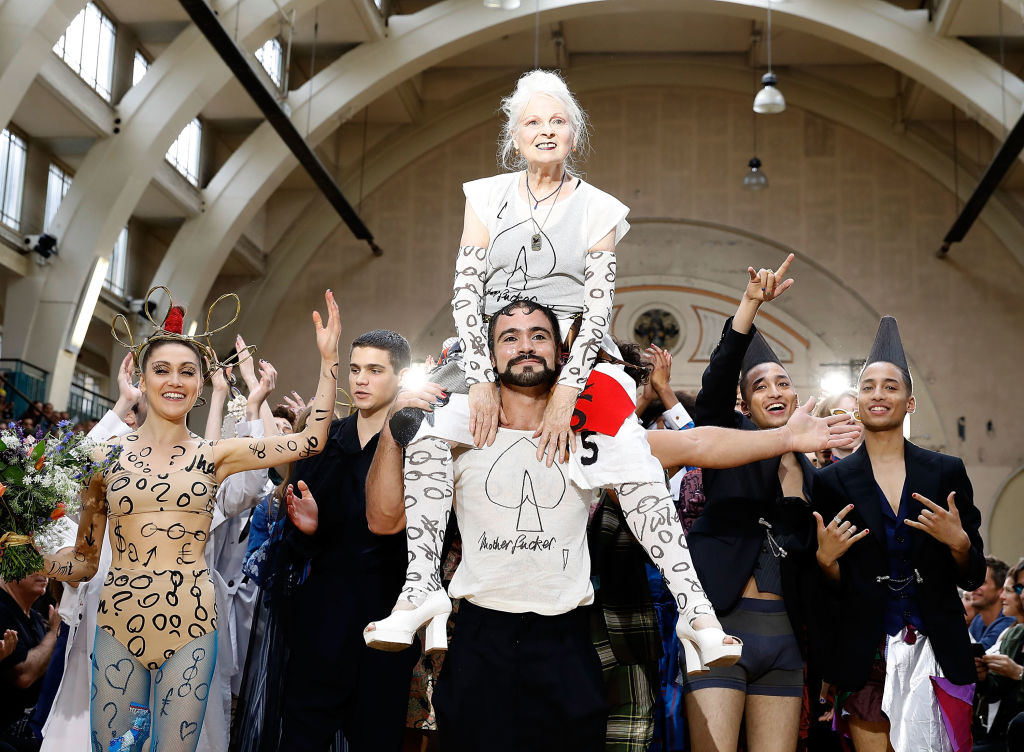 Black ballgowns, towering platform shoes, fishnet stockings and multiple pleats trousers were just some of the looks British designers featured in their Spring 2018 collections on the runways last week in London.

But it should be noted: this was Menswear Fashion Week.

It might be hard to accept these looks for blokes are from the same nation that gave the world elegant bespoke suits of Saville Row, the super suave and hyper-masculine style of James Bond, the timeless Burberry trench and the enduring appeal of aristocratic tweedy suits.

But British fashion have also given us  punk, new wave and the street style influence of the 1960s Youthquake movement, and continues to be fashion disrupters today.

London Fashion Week has always been the wonderfully wild roller-coaster ride of wacky, cutting edge and inexplicable outfits. The world’s fashion press and retailers often look to London as an incubator of ideas. As far fetched as they might be, it’s inevitable some of it gets watered down and adapted for the masses.

But then again, the world might not be quite ready for some of the ideas these designers are proposing for men.

Scroll through our slideshow below for a look at some of the menswear looks for spring 2018, you will NOT be wearing. If London Fashion Week looks and feels more like a circus than a fashion show, then Dame Vivienne Westwood is the ringleader. The 76-year-old designer is credited for bringing punk to the fashion world, and to this day, continues to push the boundaries of style and often uses her runway and clothes to make a statement about her many political beliefs. For her menswear spring 2018 collection, her show yet again was a smorgasbord of edgy ideas. For her bow at the show’s finale, instead of taking a stroll down the runway like most designers, she straddled the shoulders of a young performer, rather fittingly. All hail the Queen. Not since the 1970s, have we seen men in such towering platforms like this pair seen at the Vivienne Westwood spring 2018 menswear show. And since designers have mined every trend from the disco era already, is it ripe for a comeback? From a marketing standpoint alone, there’s an entirely new generation of young men and potential customers who have never donned shoes with some glorious height. There is no denying Vivienne Westwood can cut a good gown. Ask Carrie Bradshaw, who wore a dramatic Westwood-designed wedding gown (now iconic) in the first Sex and the City movie. Westwood gown aside, it didn’t work out too well for her, since she was left at the altar. But it’s hard to imagine an occasion a gentleman would have, which requires him to don a black taffeta gown. So let’s leave this one on the runway. Just as you were recovering from laughter of the notion of a man in a black gown, along comes another. If the Vivienne Westwood black gown looked ready for a grand ball, this one – rather pious and Tudor-looking – from designer Charles Jeffrey, looks ready for a life in a religious sect. And again, no man would require this outfit. But if we see a third black gown during menswear fashion week, we would have to make the alarming proclamation: it’s a trend! From designer Craig Green, this cape/poncho looking outfit features some striking colours and graphics. But we can’t help but picture what an amazing looking rug it would make for the home. While we can clearly see that designer Craig Green is a maestro when it comes to picking colours, what we can’t picture is what exactly is this getup? Once again, our minds turn to home decor and imagines what a wonderful piece of hanging wall art this would make. The creative force from designers during London Menswear Fashion Week was not just found in the clothing and the spectacle of their runway shows but also extended to the hair and makeup on their male models. From cone shaped hair styles to pancake white makeup to this sinister bruised lip look on all the models at the Matthew Miller show. These are dark times indeed in the world and designers are envisioning all sorts of apocalyptic scenarios from warfare to climate change meltdown to environmental doom.  The uber-cool streetwear label KTZ seems intent on not taking any chances by preparing for multiple disasters by mixing military green with face-saving chainmail made from pop can tabs. Here is a bright notion amongst the hijinks of the menswear spring 2018 collections from London Fashion Week. If you’re one of those males tired of the tyranny of too-tapered trousers and skinny jeans, relief is in sight. The trendy high-street retailer Topman (Topshop and Topman departments can be found at The Bay) held a design presentation during London Fashion Week which featured pants with an accordion of pleats. This could signal baggy and roomy pants are on the way back next spring.