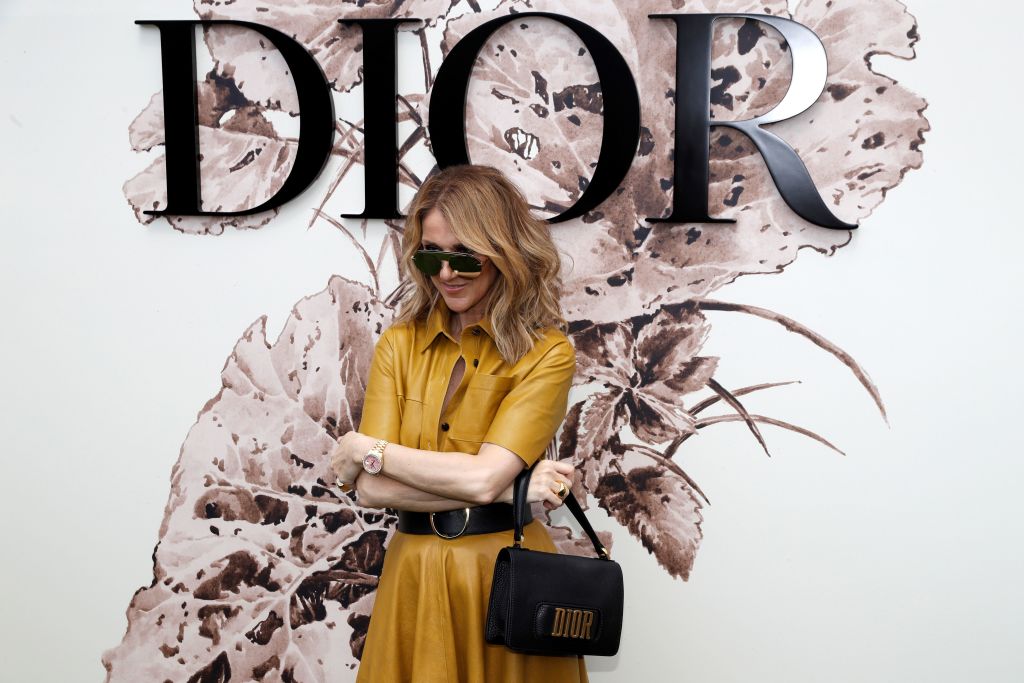 There is no doubt 2017 will go down as the year of the epic fashion metamorphosis of Celine Dion.

The Canadian chanteuse – on a break from her Caesars Palace Las Vegas residency –  is currently in Paris for her European tour, and every day she steps out of her hotel, styled to the high heavens in some sensational designer outfit. The labels she’s sporting – Dior, Gucci, Balmain – read like a compendium of the most coveted names in fashion today. And with the local and international press feverishly documenting each of her show-stopping appearances on the streets, it’s literally like watching the making of a fashion icon.

In between her sold out concerts, the 49-year-old also attended the recent Paris Haute Couture Fashion Week, sitting front row next to the high priestess of the fashion world, Anna Wintour, editor of American Vogue. The magazine has been documenting Dion’s entrée into the rarified world of Haute Couture, where a select group of designers – deemed worthy by the French – sell one-of-a-kind, hand-crafted garments to a small and exclusive group of women from around the world.

This past week, Vogue’s website had no less than four features on this latest fashion star. A cinematic video also shows Dion decked out in some of the couture outfits fresh off the runway. And as was her wont, she hams it up, twirling, leaping and dancing her way around Paris, dressed in some of the most exquisite and expensive clothes in the world.

Of course, fashion pundits have declared her the best-dressed woman during the fashion week. Such style anointments were not always bestowed upon the songbird from Charlemagne, Quebec. Despite her tremendous talent, her golden pipes, a career spanning over three decades, five Grammy Awards, over 200 million albums sold, the global superstar was never catnip to the fashion world, which was often critical of her sense of style. Her most memorable fashion outfit was a backwards white tuxedo designed by John Galliano, which she wore to the 1999 Oscars. But memorable for all the wrong reasons; it placed her on many Oscars’ Worst Dressed Lists.

This Celine Dion 2.0 is the work of the self-described ‘image architect,’ Law Roach, an American stylist recruited by the performer last year to manage her style overhaul. Roach is best known for working with such millennial stars as Zendaya and Arianna Grande. Last year at couture week, Roach starting styling Dion and this was perhaps the ignition point of Dion’s soaring style transformation.

As 2017 gets underway, it is clear that Dion has now fully unfurled her sartorial wings, as each of her appearances become blockbuster looks, wowing fans and fashion critics alike. The white gown with the plunging neckline and gigantic sculptural sleeves by Stephane Rolland she wore in May at the Billboard Music Awards was jaw-droppingly dramatic. Back in March, at the premier of the live action Disney movie, Beauty and the Beast, she slayed the red carpet in a svelte baby-blue gown with a giant bow on one shoulder.

And for someone who once said, “I’ve never been cool – and I don’t care,” suddenly, she is now the coolest celebrity. It’s not all just about her fabulous wardrobe, there seems to a Celine Dion renaissance of sorts and a new-found love-in for her. And it’s not just coming from fashion folk but also from other celebrities. Backstage at the Billboard Awards, Drake, bowed before her and declared her iconic and mentioned he is getting a Celine Dion tattoo. At this year’s Grammy Awards, Lady Gaga turned into fangirl mode when she met Dion.

Most modern day pop stars often set out to conquer the fashion arena in tandem with their musical careers. Not only does it mean more exposure but also provides a lucrative opportunity to expand their brand to include clothing lines and beauty products. But Dion, for much of her career avoided the fashion establishment and their inner circle. Needless to say, she did alright without their help, having accumulated an estimated net worth of $380 million, according to Forbes.

But many are left to wonder why she is now venturing into this particular arena and stepping up her fashion game. And not merely tip toeing meekly into this world but making some rather grand entrances. Earlier this year, for the first time, she attended one of the industry’s most exalted events – the MET Gala in New York. And now this summer, she was sitting front row at another of the industry’s summits – Paris Haute Couture Fashion Week. It would appear that Dion is now a member of the chic clique that once ignored her.

Last year was a particularly tough year, having lost her husband, René Angélil, and her brother Daniel, both to cancer. Some speculate that perhaps this style reinvention is one way of moving on. But it also looks like one of the world’s most successful recording artist has her eyes set on becoming another kind of mogul. Earlier this year, she announced the launch of her lifestyle collection. The first items rolling out this fall will be handbags and luggage from the Celine Dion Collection.

But as she continues her parade of fashion outfits – and as fabulous as most of it is – one can’t help but feel that a signature style has yet to emerge. And a parade it is, because it includes a wide and wildly varying direction of looks veering from lady-like elegance to high-octane glamour to edgy rocker to boho chick. For her lifestyle brand to succeed, her style point-of-view needs to be sharply in focus and easily recognizable.

And while she works that out and continues to fine-tune her image with her stylist, the world is enjoying the spectacular spectacle of her fashion parade.

For a look at the range of Celine Dion’s fashionable looks in Paris this summer and what worked and what didn’t, please see our slideshow below. Seen in front of her hotel in Paris, the performer strikes a pose with a bag from the Celine Dion Collection. The dramatic top with oversized bow and sleeves by Dice Kayek hits the right note of balance when paired with the streamlined and high-waisted pants she’s wearing. Again, showing a deft play of proportions – and astute mix of colours – she keeps the volume and drama on top with a billowy sleeved blouse which is anchored with a narrow pencil skirt. Seen outside Giambattista Valli’s couture show, in one of the designer’s embroidered and lace outfits and over-the-knee boots. It takes a special woman to strut in the day time – and a summer day, no less – in thigh high boots like these. But then again, Dion is no ordinary woman. One caveat on this otherwise striking outfit – we would lose the dangling lace detail peeking out from the dress hem. This shirt dress is strikingly simple but oozes luxury because the material is the most supple of leathers which allows it to pleat, fold and hang with the ease of summer-weight cotton. Dion keeps the look chic but dresses it up with black accessories. Her Roberto Cavalli outfit tackles two trends together – bold florals and wearing a coordinating print head to toe. But Dion takes it even further by adding a third coordinating piece – a coat. Very few people can pull that off successfully without getting lost in all those powerful prints. For mere mortals, the safest thing to do is stick to two matching pieces. Balmain is one of the hottest labels in Paris right now but while this outfit might be hip and edgy on the right individual, it was Dion’s least successful looking outfit she wore in Paris this summer. First, it’s summer in Paris, therefore a floor length python coat seems out of sync. As for the rocker tee, thigh high suede boots and leather cap, somehow we don’t buy the glamazon Dion as rocker chick. Gucci is having a moment again in the limelight with kooky prints and a mix-and-mismatched way of putting things together. At least that’s how it’s shown on the runway. But you don’t have to necessarily wear it in such an off-kilter manner. This beautiful printed coat and emerald green pants with extra large cuff proves to be too much when worn together. The coat should be worn with a skirt or dress.