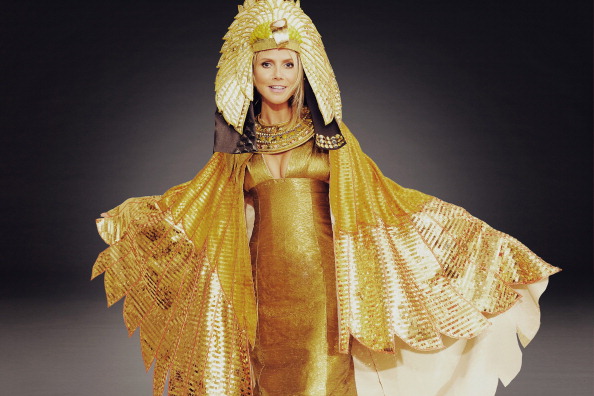 For the past decade, one woman has come to rule the ghoulish night, taking dressing up to artistic heights for her Halloween bash. Here, some inspiration to take your costume up a notch.

Some celebrities approach Halloween with an effort worthy of an Academy Award performance with meticulously detailed costumes, wigs and makeup, rendering them unrecognizable and seemingly lost in character. Then again, Halloween parties can be big splashy events in New York and Las Vegas, and this is just another opportunity to get dressed up for a red carpet moment.

But for the past decade, one woman has come to rule the ghoulish night, taking dressing up to artistic heights for her Halloween bash.

If awards were handed out for best Halloween costumes, it should undoubtedly go to model and television personality Heidi Klum. The 44-year-old Emmy Award winning host of Project Runway and a judge on America’s Got Talent has been hosting some legendary Halloween parties in New York city since 2001, and her costumes are nothing short of epic.

Klum goes to extraordinary lengths, often employing an Oscar-winning makeup artist, professional costume designer and the use of prostheses, to transform herself into some extraordinary characters for the annual party, which has become a coveted invite for Halloween night.

Her parties, typically held at a hot nightclub, has grown in scope with sponsors and an elite guest list of celebrities, models and other A-listers who walk the red carpet in full costume. But none come close to rival the horror hostess and her ingenious attire. Over the years, Klum made spectacular entrances, from arriving on horseback dressed as the 11th century noblewoman, Lady Godiva to being pushed on a gurney in full body makeup to look like a bloody cadaver stripped of skin.

As October 31st approaches, take some inspiration from her and take your costume up a notch.

Scroll through our slide show below for some of Heidi Klum’s fantastical Halloween looks over the years. For her 2013 Halloween bash, Klum transformed herself – with the help of an Oscar winning special-effects makeup artist – into an old lady. Whilst the transformation looked incredible, it did make one pause to wonder; when did a senior citizen considered a good Halloween costume? It was not as if she was playing an elderly archetype like an old witch or such – she just went as your average old lady, albeit, one that looked as if she lived on fashionable Park Avenue. But as Klum said in an interview, the look was supposed to be a 95 year old version of herself – which perhaps, can be argued was not offensive since she went as herself. And it did make for fun pictures to see this ‘old lady’ get down to the music for some bump and grind on the dance floor. Back in 2008, she went as Kali, the Hindu goddess of enlightenment, who is often depicted with multiple arms and blue skin. For her Halloween bash in 2011, which took place at TAO Nightclub in Las Vegas, her special-effects airbrushed makeup put a ghoulish spin on the phrase, stripped naked. She arrived on the red-carpet via an autopsy table, dressed as a cadaver who looked as if they had their top skin removed entirely. Klum’s 2015 Halloween costume reached new proportions as she was plumped out with prostheses to play the sultry cartoon character Jessica Rabbit, from the 1988 Disney movie, Who Framed Roger Rabbit.

In 2012, she had to postpone her Halloween party to December due to Hurricane Sandy. The former model’s costume reflected one of history’s legendary beauties, Cleopatra. For her 2010 party, the queen of transformations went as a Transformer, towering over guests at 8 feet tall in hydraulic shoes. After 17 years of hosting Halloween parties and dressing up in some of the most creative costumes, last year, Klum played her best trick and went as herself – but with five clones. The former Victoria Secret model arrived at the party in a wooden crate with five models who were made up with the aid of prostheses and wigs to look like her.