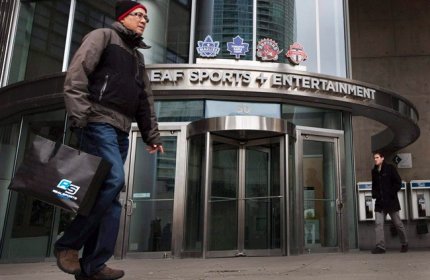 After weeks of rumours about potential suitors, the Toronto Maple Leafs have finally been sold. In a press conference this morning, communication giants Bell Canada Enterprises and Rogers Communications announced they have jointly purchased 80 per cent of Maple Leaf Sports and Entertainment, which not only owns the famous hockey franchise but also the Toronto Raptors (basketball) Toronto Marlies (AHL hockey), Toronto FC (soccer) and numerous real estate holdings, including the Air Canada Centre. George Cope, CEO of BCE, pointed to the upsides of the deal: the Leafs will stay in “Canadian hands” and going forward, there will be no reason “to miss one second of one game.” Nadir Mohamed, CEO of Rogers, said he was “thrilled…to be part of such a world-class organization.” With the two media conglomerates taking over as owners next summer, expect big changes in the way you watch games (online and over smartphones) as well as how the game is covered. The purchase also puts CBC’s historical association in broadcasting the Leafs up in the air. Since BCE owns TSN and Rogers owns Sportsnet, it’s unclear how Hockey Night in Canada will compete with the two sports networks.