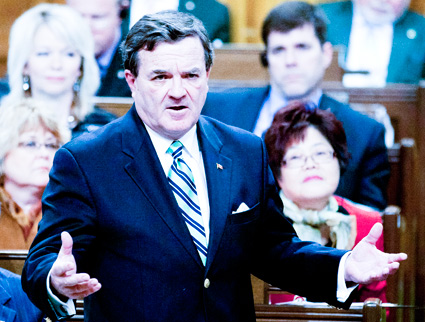 As Finance Minister Jim Flaherty enters meetings with his provincial counterparts in meetings beginning in Victoria today, clues are beginning to emerge on how the Conservatives will reduce the budget. According to a recent article in the National Post, one measure Flaherty is likely to bring up is a proposal to reduce future federal health transfer payments to the provinces. The scenario will likely see all increases tied to economic growth — if the economy grows by 5 per cent, so to will the health budget. However, with the economy expected to grow at only 2.2 per cent annually for the next four years, this could see the annual provincial health transfer slashed by a third, from the current six per cent yearly increases guaranteed under the current health-care deal. What will this likely mean? Longer wait-times, fewer doctor appointments and an increased emphasis on treating patients at home rather than hospital. Expect pushback from the provincial ministers.