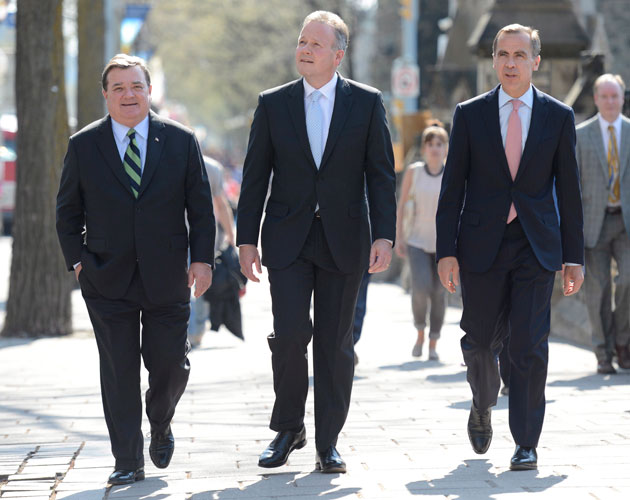 Finance Minister Jim Flaherty  has ended months of speculation – and shocked everyone – by naming Stephen Poloz, 57, as the new governor of the Bank of Canada. Most observers had tabbed Tiff Macklem, current senior deputy governor, as the next top banker.

But for reasons known only to Flaherty, he tabbed Poloz for the job. “After pursuing an exhaustive domestic and international search to find the best candidate for this important and challenging role, the Board ultimately found such an individual in Stephen Poloz,” said David Laidley, Chair of the Special Committee of the Board of Directors. “Mr. Poloz has significant knowledge of financial markets and monetary policy issues and extensive management experience. We are confident Mr. Poloz will make an outstanding contribution to the work of the Bank and uphold its reputation as a leading central bank.”

During his term here as top banker, Carney became something of a global economic superstar, credited for his adept handling of the Canadian banking system and steering the economy through the worst of the recent credit crisis. For his efforts, he was lauded in financial circles, severed on various prestigious economic bodies and was even named to Time magazine’s 2010 most-influential list – all of which led to his new job in Britain.

It’s unlikely Poloz will cut the same dashing public figure as his predecessor – he didn’t even have a Wikipedia page at the time of his appointment. Born in Oshawa, Poloz studied at Queen’s University before completing his PhD in economics at the University of Western Ontario. After joining the central bank in 1981, Poloz moved to Export Development Canada in 1999. He now takes the reins from Carney who, appointed in 2007, departs to Britain to serve as Bank of England governor.

Though he hasn’t made any public remarks yet, it seems more than likely Poloz will follow Carney’s lead of keeping interest rates at their record low levels in an effort to boost our fragile economy through this prolonged period of low to zero growth. Going forward, his monetary policies will not only have to stimulate economic activity but do so in a way that meshes with Finance Minister Jim Flaherty’s stated goal of eliminating the federal deficit by 2015.