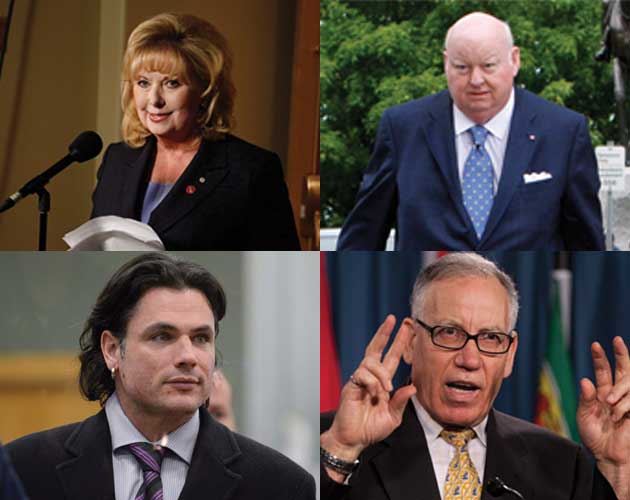 How four free-spending senators make a punchline out of Parliament Hill. Mike Crisolago breaks down the costs of the not-so-funny joke

IT’S A SHAME they don’t screen Marx Brothers films in the Canadian Senate. You know – display them on a wall in the cafeteria during lunch or build a drive-in behind Parliament Hill. If they did, senators Pamela Wallin, Mike Duffy, Patrick Brazeau and Mac Harb may have heard Groucho Marx quip, “While money can’t buy happiness, it certainly lets you choose your own form of misery.”

About $507,000 ago, Wallin, Duffy, Brazeau and Harb were known best as two former journalists, the guy who got beat by Justin Trudeau in a boxing match and … well … Harb. But then the Red Chamber began bleeding green. Wallin’s travel expenses raised eyebrows; her visit to the Bradford Museum? Perfectly legit except for the fact that the museum doesn’t exist. And how many residences do Duffy, Brazeau and Harb keep? It’s debatable but, either way, you’re paying for them.

The $507,000 – the approximate combined amount of public money the four senators were investigated for spending or were ordered to reimburse – is no chump change. Think about it – that’s 31,688 glasses of $16 orange juice for former MP Bev Oda.

Remember, too, that the audits of all four senators cost roughly $240,000, and now a planned audit of the entire Senate could top $2 million. That’s at least 2.7 million taxpayer dollars spent on this whole affair. Keep that figure in mind the next time you’re waiting for hours at a severely underfunded hospital/medical centre. Or the next time you hear about First Nations communities living in Third World conditions. Or the next time the government cries poor to Environment Canada or the Health Council of Canada or Veterans Affairs or your grandkids’ arts and sports programs.

Harb, meanwhile, retired in the wake of the scandal. Wallin and Duffy both left caucus.

And then there’s Nigel Wright, the Prime Minister’s former chief of staff who resigned after doing Duffy a solid via a $90,000 cheque to cover his debt. However, recently uncovered emails show a dialogue between the two Conservative senators David Tkachuk and Carolyn Stewart Olsen (members of the team investigating the situation), discussing the politics of the loan. Interesting …

All of this, of course, has the public sharpening their pitchforks and igniting their torches.

A survey conducted by the Canadian Press and Harris-Decima shows 86 per cent of Canadians polled believe senators and MPs incorrectly claim expenses, while others are calling for the abolition of the Senate.

Prime Minister Stephen Harper scored a temporary reprieve from Opposition grilling by playing the prorogue card (his favourite trick!) back in August, but with Parliament set to resume this month his political opponents will be looking for payback. And you know what they say about payback.

Until then, the Senate of Canada stands as one big punchline – which, ironically, would have made Groucho feel right at home.

It’s just scary to think that the guy with the wacky eyebrows, chomping on a cigar and cracking one-liners, would likely be the most sensible person in the room.