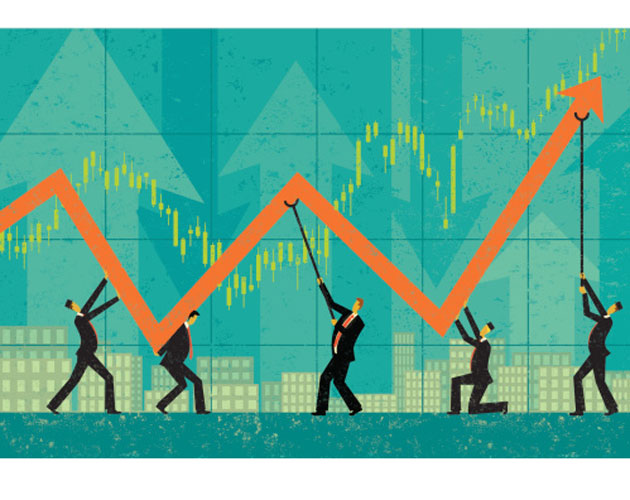 Don’t expect much from the Dow
U.S. stocks had a terrific year in 2013. All the major indexes posted strong double-digit returns, with the Dow and the S&P 500 setting new records. We’re unlikely to see a repeat in 2014. Historically, market performances such as last year’s are followed by a period of consolidation. According to stock market research firm Birinyi Associates, as reported in The Wall Street Journal, there have been 23 years since 1927 in which the S&P 500 has posted a gain of 20 per cent or more.

The average gain in the following year was only 6.4 per cent. I expect that’s what will happen on Wall Street this year. There will be a lot of choppiness but, in the end, the best I can see are percentage gains in the high single digits.

Do look for a TSX rebound
While 2013 was great for U.S. stocks, it was a lousy year for the Toronto Stock Exchange. In fact, the TSX was one of the worst performing markets in the world – even Europe beat us! The main reason was the lousy performance of our resource companies, which make up a large component of the index. As the year was winding down, the S&P/TSX Capped Metals and Mining Index was showing a loss of 28 per cent, the Capped Materials Index was off 32 per cent and the Global Gold Index had plunged a scary 47 per cent. With numbers like that, it’s a wonder the TSX made any gain at all in 2013. This year should be better, if only because it’s unlikely that the resource sector will do so poorly two years in a row. I don’t expect a return to the heady days before 2008 when strong commodity markets drove the TSX to an all-time high. But I’d be surprised if we end up as a stock market bottom feeder again this year.

Don’t overload on bonds
The great bond bull market is over. We are not likely to see another one in our lifetimes. For the better part of three decades, bonds have been a great place to be as falling interest rates drove up prices. Over the 20 years to November 30, Canadian fixed-income mutual funds produced an average annual compound rate of return of 5.28 per cent. That’s a very acceptable profit from a low-risk security. But those days are over. Rising interest rates have the effect of pushing down bond prices, and we’re already seeing that. Over the 12 months to Nov. 30, the average fixed-income fund lost 1.48 per cent. We could see a repeat of that dismal performance in 2014. If you want to own some fixed-income securities, focus on short-term issues or the funds that invest in them. They carry the least amount of risk.

Do look for growth stocks
As we saw last May, when interest rates spike higher, it isn’t just bonds that get hit. The collateral damage is extensive. It included real estate investment trusts, preferred shares, utility stocks and other low-growth high-dividend stocks. When (not if) rates start moving higher again, expect more of the same. Defensive portfolios – the kind that did so well from 2009 to the spring of 2013 – will be hit. The best choices in these conditions are shares in companies with above-average growth prospects. This doesn’t mean you should put your savings into penny mines. There are lots of blue-chip stocks that offer growth potential, including CN Rail, Alimentation Couche-Tard, Brookfield Asset Management and some of the banks. Your financial adviser can help choose the ones that are best for you.

Don’t buy a lot of gold
Gold has become completely unpredictable. Programs such as quantitative easing should result in inflation and the debasement of the U.S. dollar. In turn, this should have the effect of driving the bullion price higher. But it hasn’t played out that way. Gold took a beating in 2013, and gold mining stocks were hit even harder. The precious metal should stage a comeback at some point, but there is no way to predict when that will be. In the meantime, best to stand clear.