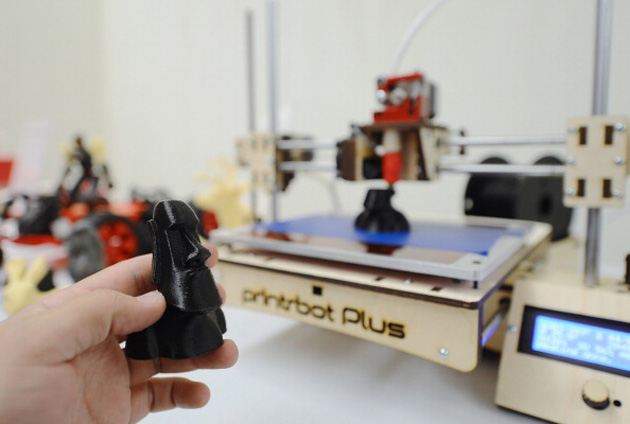 3D Printshow is the world's premier event for all things 3d printing is held in New York, United States on February 15, 2014. 3D Printshow, an interactive 3D-printing event that showed off what the technology could do for art, fashion, movies and medical. (Photo by Cem Ozdel/Anadolu Agency/Getty Images)

Let your imagination run wild. You may soon be able to make your own furniture, clothes, even food at home by using 3-D printers. It’s the next big thing – perhaps even bigger than the Internet. But should you invest any money in this exciting technology?

There was an article in The Globe and Mail recently about how scientists are using the principles of 3-D printing to attempt to create a bionic heart. At about the same time, The Wall Street Journal published a lengthy story about how 3-D printing could revolutionize manufacturing by cutting both costs and timelines dramatically.

One example from the WSJ article: Ford Motor Company is using 3-D printers in its design centres to make moulds for prototype parts. “It takes four days and costs $3,000 to print a 3-D prototype of an engine’s air intake manifold, compared to four months and $500,000 without 3-D printing,” WSJ writer Bob Tita said.

3-D printing is a technology that makes it possible to create a solid object out of virtually any material from metal to human tissue. It has already been used to produce everything from titanium knee joints to plastic guns. The weapons application scares the daylights out of authorities and the U.S. Department of Homeland Security has asked for legislation to make that aspect of the process illegal.

I don’t pretend to understand how it works but from everything I’ve read the end products are as good or better than those made in traditional ways.

The process is not as new as most people think. According to Wikipedia, the technology has been around since the 1980s with the first working printer created by an inventor named Chuck Hill for 3D Systems Corp. But it is only in the past couple of years that the commercial applications of this mind-boggling technology have begun to capture the imagination of entrepreneurs and attract billions of dollars in investment money.

Someone asked me the other day to try to envisage what impact 3-D printing technology would have on the world a decade from now. I think it could potentially be as transformational as the Internet – perhaps even more so. The manufacturing implications are obvious – the U.S. Navy is already using the technology on an experimental basis to build equipment. But that’s just the tip of the iceberg. Imagine a 3-D printer in every home. Families could use 3-D kits to create toys for the kids, a kitchen table, patio furniture, new clothes, and maybe even a high-definition TV set. You may even be able to produce your own steaks. Let your imagination run wild!

As in the early days of the Internet, tech-savvy investors have been plunging into the stocks of 3-D printer companies, driving up prices to absurd levels in hopes of huge profits as the technology becomes cheaper and more widely available. Indeed, some basic 3-D printers can now be purchased for around $1,000 although those with commercial applications can run to hundreds of thousands of dollars.

Predictably, this has already led to a boom-bust scenario. 3D Systems Corp. (NYSE: DDD), one of the industry leaders, has seen its share price plummet from a high of $97.28 in early January to the $50 range (figures in U.S. dollars). The company recorded a 45 per cent growth in revenue in 2013 to $513.4 million. GAAP earnings for the year were $0.45 a share. The good news is the company is profitable but even at the current price the shares look very expensive.

The ExOne Company (NDQ: XONE) is a smaller player but it is developing an impressive client list including the U.S. Navy, Caterpillar, and United Technologies. Sales last year were $39.5 million, up 38 per cent year-over-year, but the company lost $6.5 million ($0.51 a share) and based on management projections ExOne will do well to break even in 2014. Its stock has also plunged, falling from a high of $78.80 last summer to around the $30 level.

The bottom line is that 3-D printing is an exciting technology with what appears to be an almost limitless future, but investing in the sector right now is a minefield. Normally, the best way to take a speculative position in a rapidly developing field such as this would be through a specialty exchange-traded fund (ETF). However, none that focuses exclusively on 3-D printing companies has been created to this point, although several broader-based technology ETFs hold shares of DDD, SYSS, and others.

Therefore, my advice right now is to stand back while this fledgling market shakes itself out. There will be money to be made down the road but the challenge will be to identify which companies to choose. I’m intrigued by the potential here so I’ll keep a watch on the sector.