An Open Letter from an Older Worker to a Younger Boss 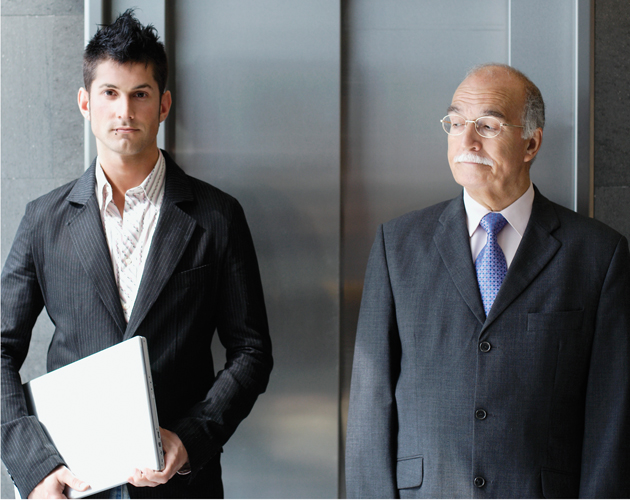 HAZAROS SURMEYAN, a 72-year-old character dancer with the National Ballet, knows all about working for a younger boss. And he can say it all in one word.

In the early ’70s, Surmeyan was 28 when he partnered a teenage ballerina dancing her first lead role in Swan Lake with the company.

“She was a beautiful dancer but young and inexperienced,” recalls Surmeyan, who supported her in ways well beyond what was required by the choreography.

How does that work for him?

“I just respect her like the other six or seven bosses in my career,” he says.

The younger boss-older employee dynamic, however, is a two-way street. It’s also an increasingly busy one.

The proportion of people aged 45 to 64 among the working-age population in Canada reached 42.4 per cent in 2011and increases every year. One in four people aged 65 to 70 are still working.

More and more, younger bosses are having to manage older workers and, because this transition isn’t always a smooth one, here are some tips for you, the younger boss, from one older worker (namely, me).

1. Don’t look askance if my wardrobe is not all Juicy Couture and Joe Fresh – that is, when I come to work dressed in a Talbot shirtwaist circa 2009 and sensible shoes with hosiery. Believe me, if I dressed à la mode, with leggings painted on and a miniskirt barely covering my bum, the work environment would not be improved. But if I ever do show up with a surfeit of flesh that’s been let free to roam, please pass me the pamphlet with contact information for employee crisis counselling.

2. Do remember that even if I don’t know some things you know – how to design a webpage, how to work it on Tinder, how to size photos – I’m able and eager to learn. In the meantime, try to appreciate what I do know and can do. There are lots of younger people in the work environment who know the up-to-the-minute stuff but not so many who experienced the past.

3. Value and exploit me as a mentor. But also provide me with a mentor for what I didn’t learn in my last 40 years in the workplace, someone who will be as patient with me as I will try to be with the intern learning to write a headline.

4. Don’t assume I only want to socialize at work and after work with people my own age. I’d love to be included when you lunch at a hot spot or go for a drink after work. I might pass on club night – but don’t forget to invite me.

5. Yes, when I first started working as a journalist, I used a typewriter and carbon paper. But no, I don’t remember the Second World War. You can recognize that I’m older than you are but also that I’m not that old.

6. Don’t be afraid to ask me to do things – assignments, errands, even make coffee. I want to be treated like any other employee in a similar position. I’m not your mother. I’m not your grandmother, either, even if I’m around the same age as one or the other.

7. Don’t ask me how long I want to keep working. Don’t even try it in a roundabout way that you think is subtle. Whether I’m still working because I need the money or because not working is boring for me or because I like the company of my co-workers or because I’m saving up to buy a flat in Paris when I retire or just because I can, my reasons for working are much the same as anyone else’s.

8. Do avoid sending me motivational messages. Especially the ones about how you’re only as old you feel. Also, don’t feel obligated to celebrate my birthday.

9. Try to understand, if I don’t get wildly excited about your terrific, ingenious, innovative brilliant, novel idea that, more likely than not, I’ve been there, done that – probably many times. However, I will try not to say so – or even hint that your idea actually qualifies for a senior discount.

10. Appreciate the upside of having someone older as an employee: no calls from the school nurse about a child being sent home with lice, no crisis with the nanny, no unbridled ambition to take over your job.

And, since respect is a two-way street, here are ways older workers should interact with a younger boss:
1. Listen carefully and with an open mind.
2. Be polite and well-mannered; this means no eye-rolling, smirking or looking bored during meetings – and, of course, being on time and not interrupting.
3. Offer support and encouragement, not skepticism or squelching.
4. Follow up on what she asks you to do and what you’re expected to do.
5. Be constructive and positive, even when your experience tells you it ain’t gonna work; instead, reframe your negative outlook in a way that’s helpful.