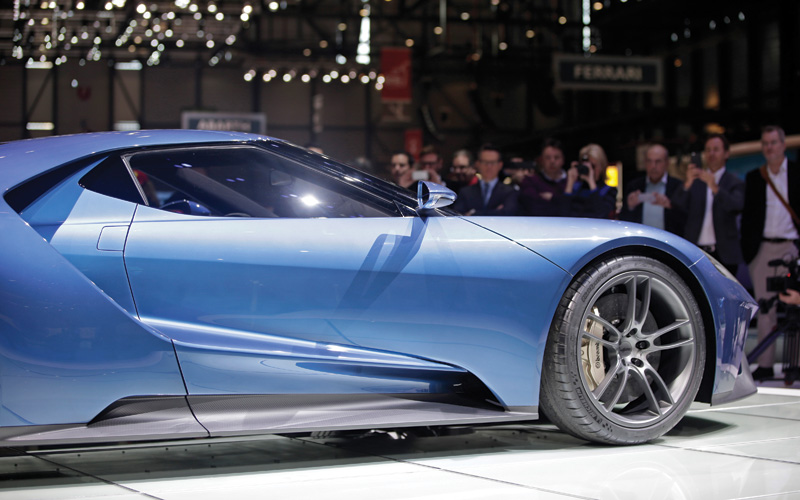 The future is super

It’s easy to forget about super cars from the past, when performance, horsepower and big noisy engines ruled the roads. Over the last decade, automakers have shifted focus towards smaller, more fuel-efficient vehicles. In a surprising reverse of this trend, Ford announced its all-new GT, a two-seat, mid-engine supercar which (last made in 2006) influenced by the hallowed GT40 from the 1960s. Not to be overshadowed, Acura revealed the final production model of its NSX supercar, the second generation of the car Formula One driver Ayrton Senna famously drove. Although Acura is incorporating a unique hybrid setup (a V6 engine accompanied by three electric motors), this gorgeous vehicle is a performance-first machine that will thrill anyone who jumps into the driver’s seat.

The future is efficient

While automakers are injecting performance in one area, they’re tightening efficiency in all others. Owning an electric vehicle (EV) is becoming more a reality than a statement. Chevrolet announced it will put its Bolt EV concept into production in 2017. With an expected range of more than 300 kilometres and a projected starting price around $30,000, it means the everyday consumer has an opportunity to own an EV that makes practical sense for their budget and provides more than enough range.

The future is alternative

Efficiency comes in many shades, one of which is fuel cells. Ballard Power Systems, based in Burnaby, B.C., was at the forefront of fuel cell development in the early 2000s but decided the technology would never work in vehicles. Ballard was wrong – and so were a lot of pundits who also wrote off fuel cell vehicles. Hyundai introduced the first Canadian recipient of its fuel cell Tuscon at CIAS – a family from Vancouver. Toyota’s Mirai FCV is already out in California. And Honda’s next-generation fuel cell vehicle, tagged the FCV, will be introduced in the U.S. by 2017.

The future is natural

Ford and Heinz (yes, the ketchup company!) are investigating using tomato fibres in its vehicle interiors. The BMW i3 incorporates such materials as eucalyptus wood and kenaf leaf fibres. Other companies are beginning to use everything from soy to cornhusks for seats and other surfaces. These natural fibres incorporate the beauty of the outside world into car design – it’s encouraging to see more cars moving in this direction.