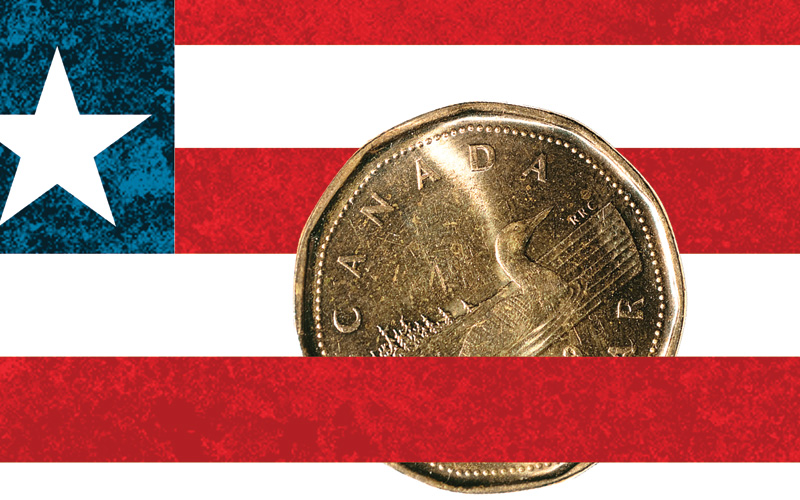 With oil prices down for the foreseeable future and our economy still not firing on all cylinders, Canadians who shop, travel or invest in the U.S. are feeling the pinch of our weakened dollar. Here are four ways the languishing loonie is changing the way we do business south of the border.

Prioritize your shopping list
Mention July 2011 to a dedicated cross-border shopper, and they’re likely to get a tear of nostalgia in their eye. That was the year the loonie was worth US$1.06, and buying “stuff” in the shopping malls crowded near border crossings like time-share touts at a beachfront bar in Puerto Vallarta was more fun than a barrel of smartphones. Now, with the dollar trading in the 80-cent region – not so much. Despite the drop, a considerable number of Canadians are still making the trip. Part of it is proximity – three-quarters of Canadians live within 160 kilometres of the border – and part of it is price.

Despite the hammering the loonie has taken, there are certain products, including milk, cheese, gasoline and booze to name a few, that are still cheaper south of the border. Gasoline alone costs a third less than it does in Canada, and the allure of that is evidenced by the cars with Canadian plates at Costco in Bellingham, Wash., lined up at the pumps 15 deep and four lanes across from open to closing seven days a week. (I know – I’ve been in them!) And for some it isn’t even that: it’s about the experience, the adventure, the fun of sitting in border lineups, sometimes for hours, before getting grilled about your grocery choices by people with guns. Go figure.

Look to stock (market) up
Murray Leith can only smile when asked if the falling loonie means investing in U.S. stocks is a bad idea.

“In the late ’90s, when the dollar was trading in the 65- to 70-cent range, people were tripping over themselves to use an undervalued Canadian dollar to buy blue-chip U.S. stocks that were ridiculously overpriced,” says the VP and director of investment research at Odlum Brown in Vancouver. Nowadays, with the dollar more fairly valued, they’re suddenly afraid to get their feet wet.

Get over it, he says, arguing that the Canadian dollar is “fairly valued” between US$0.80 and $0.85 because that puts it in line with something known as purchasing power parity, defined as the exchange rate that makes the same basket of goods equally priced in both countries.

“With the Canadian dollar roughly fairly valued, one should spend their energy focusing on the quality and price of a business. It is still easier to find high-quality businesses at reasonable prices in the U.S. and, therefore, it is still a good idea to invest outside of Canada,” he says. Translation: be not afraid!

Ask for value added
Hoteliers south of the border are not panicking about the crippled Canadian dollar. At least not yet, says Dave Blandford of Visit Seattle. “We haven’t seen a lot of discounting or Canadian-at-par pricing, at least at the current time,” he says.

Mark Andrew, general manager of the recently refurbished Semiahmoo Resort, which is just across the border from Vancouver in Washington State and a long-time favourite with Canadian weekenders, says that while deep discounting has thus far been avoided, smart hotel operators wanting to maintain their Canadian connection are making sure their north-of-the-border visitors are getting a better experience at a better price.

“Canadians are smart about their money, and they’re looking for value,” he says. “This is no time for somebody to say to them, ‘That’s the price, that’s the dollar, deal with it.’ ”

And for those planning a trip to America, here’s a tip. Don’t assume the price you see on your favourite travel website is cast in stone. Call hotels directly and speak to a human being; tell them you’re coming from Canada and that you’re looking for a better deal. Hotels will frequently wheel and deal with customers in person in ways they cannot afford to do on aggregator sites. It never hurts to ask, and there’s always another hotel.

Get real with real estate
Morbid tales of snowbirds selling their homes in the Sunbelt and moving back to Canada because the dollar is down leave Brian Nicola scratching his head. The retired supermarket manager from White Rock, B.C., says all the people he knows who could afford to buy a home in Palm Desert where he lives half the year with his wife, Lori, can afford to stay.

In fact, if it wasn’t for the 182-day residency rule, they’d stay longer, he does concede that in terms of day-to-day expenses – everything from groceries to green fees – it costs them about a third more to live in the United States now than it did when the dollar was at par.

Anecdotally, the low loonie does seem to have stemmed the tide of new Canadian buyers moving in.

“Lori was playing golf with a real estate agent the other day, and this woman said that a couple of years ago, 80 per cent of her customers were Canadian. Now it’s zero per cent.” So it would seem that when it comes to snowbirding, if you’re in, you’re in. If you’re not and you want in, it’ll cost you!