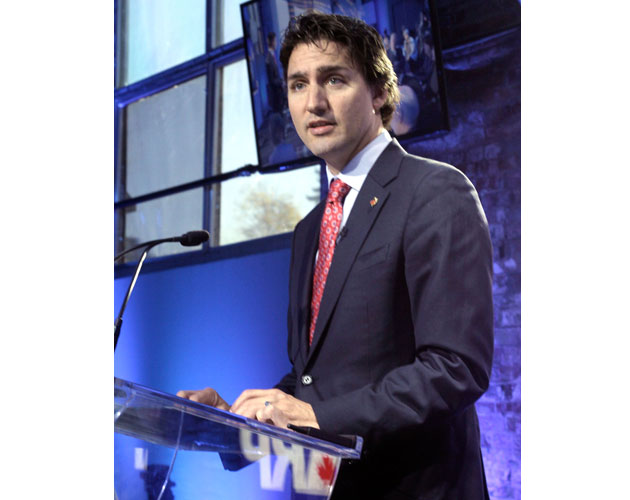 Justin Trudeau has been sworn in as Canada’s 23rd prime minister and the second-youngest prime minister in history. Here, read our exclusive interview back in March when the Liberal leader came out swinging on CPP reform.

With the Canadian Pension Plan turning 50 this year, EZ interviewed Liberal leader Justin Trudeau on the important legacy of the program and why he feels the Conservatives have dropped the ball on strengthening the CPP for the next generation of retirees.

In 1965, the Liberal government of Lester B. Pearson passed an ambitious new plan that aimed to eliminate senior poverty by providing retired workers with a modest but guaranteed annual income. The result was the Canadian Pension Plan, now celebrating its 50th anniversary.

Though the structure of CPP has changed over the years, the general principle remains the same. All working Canadians over the age of 18 pay a percentage of their annual earnings (right now it’s 9.9 per cent, half of which is paid by the employer, the other half by the employee). The Canadian Pension Plan Investment Board invests these proceeds and, when you reach 65 (though you can begin collecting as early as 60 or as late as 70) you begin receiving a monthly payout. (Full details of the plan can be found here.)

While the CPP has been lauded worldwide for delivering on its promise of reducing senior poverty and providing peace-of-mind retirement income, there’s a general feeling that perhaps, at 50, it’s begun feeling it’s age. Pension experts suggest that under its current structure, the plan is no longer capable of providing the same financial retirement security blanket it once could.

That’s why CARP has been lobbying the federal and provincial/territorial governments to consider expanding or enhancing the CPP, primarily because individual Canadians are just not saving enough for their retirement on their own. The Conservatives failed to reach a consensus with the provinces on CPP reform and repeatedly put the idea on the back-burner, arguing that increasing premiums would place too much burden on our already fragile economy. In lieu of federal action, Ontario and other provinces have begun looking into the possibility of going it alone, providing a provincial solution to this impending pension problem.

Last October, while addressing CARP’s Annual General Meeting, Justin Trudeau promised that – if elected – he would push ahead with CPP enhancement. In late March, we reached Mr. Trudeau by phone at his constituency office to discuss the legacy of public pensions and why he’s made CPP enhancement one of his key election platforms.

EverythingZoomer: What’s the legacy of the Canada Pension Plan?

Justin Trudeau: Fifty years ago, Lester Pearson came together with all the provincial leaders to create something that is, even today, the envy of the world. Our capacity to work together collaboratively across levels of government has always been one of the great strengths of this country – recognizing what being part of a federation means is understanding that federal leadership is leadership that pulls people together and collaborates in partnership with the provinces.

EZ: We don’t usually recognize birthdays of government programs. Why do you feel recognizing CPP’s anniversary is important?

JT: This one’s important on a number of levels. First of all, obviously, it’s something that’s been in the news lately. People are approaching retirement and we’re looking at the demographics and realizing that we have to be a lot smarter about how we’re helping Canadians prepare for retirement.

That’s why talking about enhancing the CPP is something we’ve been doing a lot of. As Kathleen Wynne (premier of Ontario) showed, it’s something that people are responding to. She said she would like to work with the Feds rather than going it alone – but it’s too important not to act one way or another. That’s something I certainly agree with and I’m more than happy about committing to it.

For me, the other aspect of thinking about the CPP is what it represents as a program and what it’s done for Canada… The reality is we’re highlighting this in a particular way right now because we have a federal government that doesn’t want to engage with the provinces. The federal government hasn’t sat down with provinces in years now to talk about issues. They’ve never done it on pensions and they’ve never done it on health care. For me, that’s something we need to highlight. Canada used to be a lot better at solving problems collaboratively and this challenge – but also this opportunity – of CPP is something we have to focus on.

EZ: “Wait til the economy improves” was the mantra Conservative finance ministers used to delay reform. Will the health of the economy be a factor regarding how soon you make changes to CPP?

No, I think part of the instability in the economy and the uncertainty Canadians are feeling is directly related to the anxiety we have about the future. People are worried about their retirements, they’re worried about their kids’ ability to get jobs that are going to contribute to social services that an aging population needs – there’s an anxiety now that the federal government should show leadership on and flat out say: “Yes, we need to strengthen and expand the CPP.” That’s something the Liberal party is saying and standing firm on.

EZ: Small businesses and the self-employed worry that increased CPP premiums might put a big dent in the bottom line? Are you hearing this as you go out on the road?

JT: I have been hearing that but I’ve also been talking to a lot of different provincial premiers who highlighted that there are different models, different ways of strengthening and expanding [the CPP] that will have varied impacts on groups you want to help or draw a little more from. That approach is why sitting down collaboratively with the provinces to discuss and work together and to figure out a model that is going to work for all Canadians in terms of enhancing and securing retirement while at the same time continuing to stimulate and promote the kind of growth in our economy that we need. It’s a balancing act the federal government can’t do alone and needs to work with others in order to get it right.

EZ: When you visited the CARP AGM in October, there was a lot of interest in this issue. Does it just resonate with older Canadians or is it striking younger Canadians as well.

JT: It’s striking everyone. The general anxiety of what people are feeling is really there. Even people who are still decades away from retirement are dealing with aging parents and relatives who are struggling with retirement. And we have the sandwich generation, which has both kids returning from university to live back at home while they’re caring for elder parents. People are very, very aware of this. And how we’re going to make sure, as a society, that we’re offering support and help to the largest possible number of people is key for me.

EZ: The Conservatives have developed different models (Pooled Registered Pension Plans) that put the onus on the individual to save. There hasn’t, however, been great uptake on these programs. Why won’t Canadians save on their own? Why must we rely on a government program?

JT: We can get into human nature but, as a recent CIBC study shows, today’s average 3o- to 45-year-old puts aside half of what their parents did at that same age a generation ago. What we’re realizing is that’s a factor of the economic strain people are under. The fact is that even though our economy has more than doubled in size over the past 30 years, median household income has increased by only 10 or 15 per cent while the cost of living has increased an awful lot more than that. So people feel they have less money to put aside and that short-term focus is understandable. We just need to make sure that we’re creating a mechanism that is not going to leave us collectively on the hook as a society for a generation that is going to be retiring in a certain amount of time. We have to be responsible in the government. What I’ve seen from this government is a lot of the kind of leadership that doesn’t actually reassure and inspire confidence. They have the worst record on growth since R.B. Bennett in the ’30s – the Great Depression! They have announced, completely without justification, that they’ll raise the retirement age to 67 from 65, which the Parliamentary Budget Officer and other studies has shown is completely unwarranted. There is no crisis. I think a big part of the problem this Conservative government has in engaging this issue is that it would require them to actually sit down and work with the provinces. That is something they have so far completely avoided doing. That’s just not the kind of leadership Canadians want to see from the government.

EZ: The Conservatives balked at expanding the CPP because it could never get enough provinces on board. Is it even possible to find consensus among the provinces on this issue? Herding cats is the analogy that comes to mind.

JT: Listen, you know as well as I do that concerns around retirement security are universal across this country. And to have provinces like Ontario begging the federal government to show some leadership and actually respond to the need for retirement security is something I’ve heard extreme positive response to in my travels across the country and my conversations with various premiers. What we’re celebrating 50 years of is not just an extraordinary program but also a typically Canadian success of people of all sorts of different political stripes coming together and [accomplishing something] that goes beyond geographic and political lines and ends up being in Canada’s best interest. And that’s where a federal government willing to actually step up and lead on this issue is something that Canadians across the country are asking for.

EZ: Does being leader of the party that started the program back in the ’60s carry a special significance for you?

JT: We’ve seen this government refuse to acknowledge events as varied as the 50th anniversary of the Canadian flag, the 30th anniversary of the Charter of Rights and Freedoms, this government approaches things in a very partisan way. I find that both disappointing and out of keeping with tradition. I’m more than willing to stand up and talk about Mr. Mulroney’s extraordinary efforts on leading the world in the fight against apartheid or highlight Mr. Diefenbaker’s Bill of Rights. To me, not liking the CPP because it was a Liberal invention is the kind of crassest politics that, quite frankly, is one of the reasons why Canadians are getting so incredibly cynical about politics in general but about this government in particular.

EZ: In your wildest dreams, did you ever imagine you’d become such an expert on pensions?

JT: What people forget about me is that my father was 51 years old when he had me. My dad was the age of most [of my friend’s] grandparents. Because of that, I’ve always had an extraordinary interest, openness and respect for my elders. For all the focus I’ve put on youth, that’s not something I find in anyway contradictory. I find, in a lot of things I put forward, seniors are most aware and conscious of the kind of legacy they’re leaving for their grandchildren and young people are looking up to their elders who have had such extraordinary life experiences. I think there’s a natural link between generations that, in terms of a country, we should be highlighting and building on.