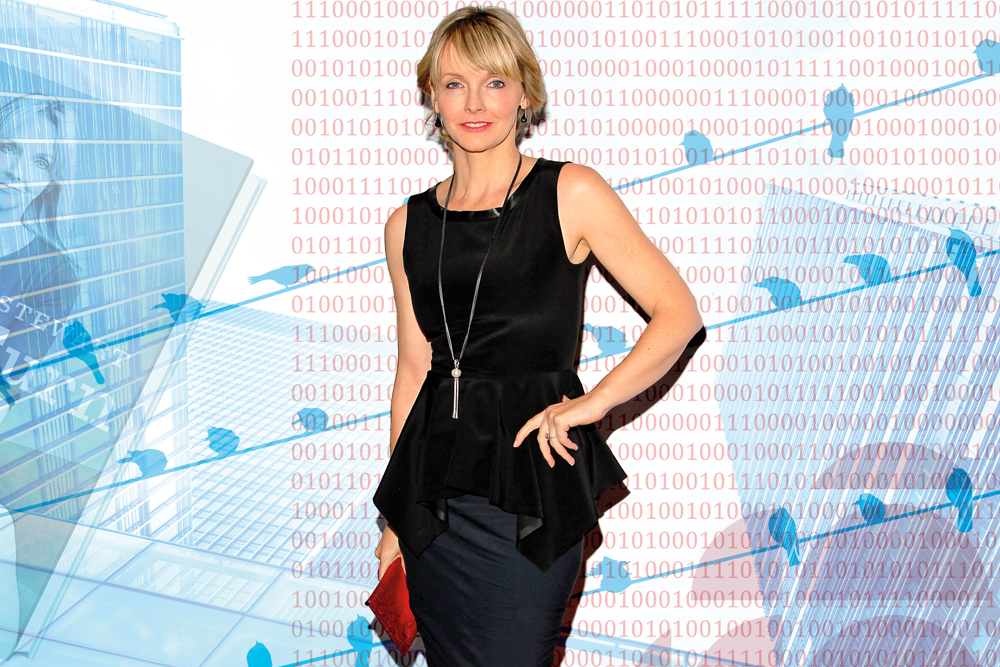 There’s a new work order, and it takes women seated at the table to keep it. In a new book, social media maven Kirstine Stewart explains why.

As a senior executive of the online social networking service that famously set the brevity bar at 140 characters, it should be, too.

But it’s the bit up front that engages you. With a name that is just a few letters off from Kristen, Kirstine Stewart lets you know that, “No, sorry…” – she’s not Kristen Stewart, the brooding movie star of the Twilight Saga film franchise in case you typed her name incorrectly into Google and landed there.

Of course, it can’t hurt to be confused with a bewitching 25-year-old actress turned Chanel muse with a Twitter following of 390,000. (Kirstine Stewart is no slouch herself with 35,000.) As online bios go, it’s a canny use of the medium she represents.

This fall, Stewart, 48, adds “author” to her bio with the publication of Our Turn, her personal take on women and leadership. It is a rational and well-articulated call to action that could make many working women feel a whole lot better about the future. Stewart believes that the digital revolution is creating “a new world order that demands a new style of leader … with attributes that makes women natural front-runners.”

In her view, digital technologies are the great leveller and women – the original pre-digital multi-taskers and collaborators with high EQ scores – are well equipped to manage complex issues because truly effective leaders of the 21st century “no longer wield power, they share it.”

The book grew out of a talk Stewart gave at Rotman School of Business in 2013 and is replete with research findings and statistics to challenge the wearying ones we hear far too frequently about the scarcity of women at the top of every corporate org chart. By now, we’ve all heard at least a few variations on the theme that while the same number of men and women enter the workforce each year, a scant percentage of board or C-suite, top management positions are held by women.

A former broadcast executive, Stewart doesn’t just work for one of the most transformative technology companies of our time, she is a zealot for the promise of tech. She lives and breathes her brand. She came to the industry just two years ago by way of the television business, where most recently she ran CBC’s English services – remarkably, the first woman and youngest person ever to do so.

Her career trajectory is impressive. Starting as an over-qualified receptionist in the entertainment industry, she began her rapid ascent through TV distribution, learning quickly how to navigate all manner of shark pools. Her personal experience forms the narrative of the book, which details how she managed to drive forward and learn to lead while gaining fresh perspectives with each career conquest. Her impulse to compete, though, had to be innate.

Stewart’s timing is good. Our Turn has launched just as the discussion of gender pay disparity and sexism in technology, a heavily male-dominated industry, has gone mainstream. It seems absurd that in 2015 it should even be an issue but in Silicon Valley, where only 20 per cent of all software developers are women, sex discrimination lawsuits have been filed, and the most future-facing industry in the world is becoming known not only for its digital advances but for its backward behaviour.

With Our Turn, Stewart joins a rarefied club of leadership sages who have produced books from Arianna Huffington to Diane von Furstenberg. Even feminist icon Gloria Steinem has written a new book, My Life on the Road, an account of how travel inspired her activism and built her leadership skills. Stewart, no doubt, will be compared to Sheryl Sandberg, COO of Facebook and author of Lean In.

While lauding Sandberg for the “important contribution” made to the discourse, Stewart distinguishes her own point of view from the Lean In brand of corporate feminism. Rather than focusing, as Sandberg does, on what women aren’t doing (or doing well), Stewart is more interested in what women do right. “For a woman to be as successful as a man,” Stewart tells her readers, “she shouldn’t need to act like one.“

Jean Davey would agree, although it’s hardly news to her. “What’s troubling is how little has changed in 50 years.” In her forthcoming memoir, The Only Woman in the Room, she describes starting out in the investment business in the 1960s when lunch was three martinis and the “old boys club” dominated. Davey, who was one of the first female licenced stockbrokers in North America, spent her entire career quietly setting herself apart from – and competing with – “the fellas” who consistently perceived her success as a series of lucky breaks.

Davey was recruited by the legendary banker Austin Taylor and eventually become the first female broker at Macleod Young Weir. She functioned in a meritocracy that applied only to men – an environment that women working in Silicon Valley today would recognize in a flash.

Something else that hasn’t changed is the truism that women are risk-averse – a trait that Stewart refers to as “the ball and chain that women must sever” to succeed in business. Stewart and Davey, although generations apart, both believe that deliberately plunging oneself into unknown waters professionally – making yourself uncomfortable – is the risk you must take in order to move ahead and break out of that stereotype.

“Technology has shifted power to the masses,” Stewart writes, and today “managing out” is the innovative way to lead. So walk away from the corner office, she urges, buy into your people and recognize that influence is the new power. “Get over yourself,” too, because holding back is a form of self-indulgence. “It’s what I told myself to get over my shyness,” Stewart says.

As a future leader especially, “You have an obligation to speak up or you’re abdicating responsibility,” says Stewart. “We all have different concepts of success. There’s no benefit to measuring everyone by the same standard.” Do it your way is the message, but work hard at it. And don’t feel you have to stick to a script.

Sophia Amoruso followed nobody’s script. Before turning 30, she had built a small cottage industry of selling vintage clothes on eBay into an online retail fashion brand that brings in $100 million annually and has a million Facebook followers. In terms of formation, Amoruso is on the other end of the spectrum from both Stewart and Sandberg: a high-school dropout with ADD, self-taught who, as the story goes, shoplifted the first item she sold on eBay. Silicon Valley has a crush on her because she’s a digital native who leveraged her mastery of search terms, click bait and regional trending topics to market her brand almost entirely using unpaid social media.

In 2014, Amoruso published #GirlBoss, a memoir-guidebook for young women with entrepreneurial aspirations who would find Lean In and its Ivy League-tinged air of privilege decidedly unrelatable. Amoruso knows her readers intimately. They are women like her: young, driven and less inclined to follow conventional leadership models, who would avoid what the business magazine Fast Company calls the “know-it-all leadership style of the past.” Last June in Silicon Valley, she told a conference, “The trick is there is no trick. Be yourself, don’t fear failure – failure humanizes people – work hard.”

Kirstine Stewart’s views on leadership aren’t far off from Amoruso’s, which isn’t surprising since Stewart says that young people inspire her. “The younger generation of women doesn’t feel obliged to stay strictly within the lines. They respect individual choice. Look at Kristen Stewart,” she says, bringing us back to the Twilight star in her Twitter bio. “I love how she rules her life. She’s defining herself by what she cares about.”

What Stewart herself seems to care about is women staking out their space in the digital era. Would she
ever be tempted to test her leadership skills in politics? Her answer is definitive: “Never.” Instead, she’s preferred to focus on rewriting the rules for women in leadership. Now that it’s done, you know exactly where to find it: @kirstinestewart.