Why It’s Time for the Word “Generation” to Fade Away 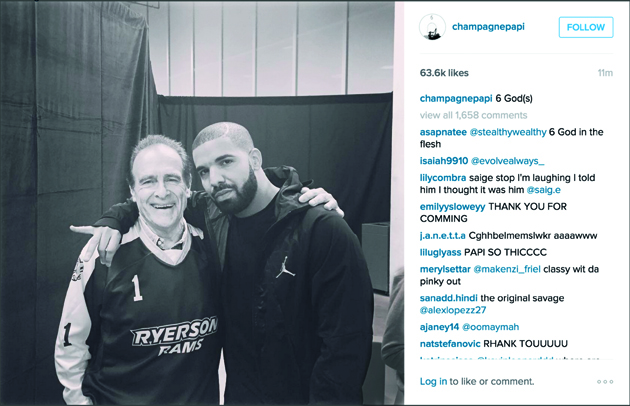 Norm Kelly and Drake on the superstar's Instagram feed

Never mind the generation gap. A boomer, a gen-Xer and a millennial walk into a bar … Why it’s time for the word generation to f-f-fade away.

Last year, for the first time in history, millennials outnumbered boomers in the Canadian workforce. That’s not going to change. The over-50 cohort has, unfairly or not, pegged the younger generation as being rather demanding and entitled on the work front. So will the ascendancy of the under-35s only deepen the generation gap? Or is it time to retire the G-word and the whole dusty notion of a demographic that’s ruled by the calendar? Can’t we all just … get along?

Let’s eavesdrop on a multigenerational scene to find out.

It’s early on a Thursday night in Toronto, and three people walk into a bar called Lo-Fi. Wendel is 29 and black. Don is 64 and white. Angela is 45 and from southeast Asia. They work in the same ad agency and they’ve come straight from the office to celebrate – Don has decided to postpone his retirement yet again, and Wendel’s going to be promoted. Their agency, InOV8, has been trying out a new campaign that targets both millennials and boomers, and they really like this “age-agnostic” approach.

Don happens to be a co-owner of the bar. (Diversify, his accountant urged.) He orders a margarita – Tromba, no salt. Wendel has a craft beer, and Angela asks for something called a Crown and Anchor, made with rye whisky, crème fraîche and maple syrup. It’s on my tab, says Don, smiling. He enjoys these fleeting moments of seniority.

Behind the counter is Rooster, a 30-year-old musician-slash-bartender from Vancouver. He’s got a beard the size of an oven mitt, an MBA from Queen’s and his recent start-up (home delivery by electric bike of fruit smoothies) has not taken off. He’s also learned that most musicians earn less than panhandlers. So like many of his peers, Rooster survives by bartending. Which he kind of enjoys. But he keeps a USB of his songs handy in case someone important drops by.

Luckily, he has an intern, Sofi, 22, who helps stock the bar. Sofi is from Iran and is studying to be a pharmacist. Don is old enough to remember paid internships, so he pays Sofi minimum wage, for which she is grateful. This means that by working four other part-time service jobs, she can afford to rent a tiny apartment above a Subway shop.

The bar has a big poster of Grimes on the wall, Japanese anime playing on small TVs and a chrome karaoke stage up front. It’s pretty hip for someone Don’s age – but then, he and Wendel like to think of themselves as a slightly less hip version of another cross-generational pair of buddies, 29-year-old musician Drake and Norm Kelly, the 74-year-old Toronto city councillor.

Despite their age differences, Drake and Kelly share several core values, including full-out civic pride in their hometown and a passionate belief in the Raptors. Drake tutored Norm in the power and glory of Twitter, and Norm finally learned the meaning of the word “diss.” Just like Wendel got Don to stop holding his phone vertically when he takes pictures. Reverse mentorship: it’s the way of the future.

Drake’s international success has also demonstrated a millennial paradigm: he went global by staying close to home. His lyrics are rooted in the local. He could have shot his most recent video anywhere in the world.

Instead, he chose The Real Jerk, a family-friendly Jamaican restaurant in the city’s east end. Metaphorically speaking, Drake is still living in his parents’ basement – but look at how it worked out! Let that be a lesson to doubting boomers.

Back at the bar, Angela texts her husband to let him know she’ll be late. No biggie, these outings are part of the job. In the Mad Men era, office and home were kept separate, but now the work/life boundaries have dissolved: it’s all work and all life all the time. Emails fly back and forth on Sunday morning or after midnight. When you’re on the digital time clock, nobody punches out.

In fact, as they wait for their drinks, all three pull out their phones. Angela scrolls while Wendel swipes. The soft blue light from their screens bathes their faces like moonlight. It’s a peaceful scene; here they all are, together but separate. Wendel looks fully engaged with his phone in a way that eludes him in conversation.

After checking her Twitter feed, Angela texts her dog walker to make sure the house key is back under the planter where it belongs. Wendel is pondering his options for later on Tinder. Don leans across the bar to show Rooster a YouTube video of a dozen adorable baby sloths in a red plastic bucket.

This digital multitasking is what our socializing looks like now. Technically, there are only three people here, having drinks in a bar. But when you add up the messages flying in and out of their devices, there’s a whole crowd of virtual ghosts in the room. Where Don and his peers grew up scarcely bothering to phone their parents once a month, millennials are in constant touch with each other and their families.

Next: Millennials are surely the most connected generation ever

The millennials are surely the most connected generation ever, and many of their values – authenticity, work-life balance, inclusiveness and tolerance – are admirable. The only problem is that the economic realities have not caught up to their values. The system is set up for a fixed hierarchy arranged in cubicles, but many of the young prefer to work from a corner table in a café.

And if they have a job-job, when they get a performance review, they review their boss’s performance. They don’t have much patience for authority. The digital revolution has created a new democracy, a level playing field where any kid with an iPhone can leap to the top of the talent pile with a single posting on YouTube. The membrane between anonymity and global fame has become extremely thin, and the concept of “working your way up” has less appeal.

Meanwhile, the political ideals that once defined the boomers have faded – or are they just being reborn, as millennial self-expression writ large? Beyoncé at the Super Bowl, evoking the Black Panthers with militant ThighMaster choreography. Rap singer Kendrick Lamar electrified the Grammies with a fiery pageant of African-American history. The very last (we hope) all-white Oscars took place, shame heaped on its head by the witheringly funny Chris Rock. In Canada, pop music will never be the same after a show-stopping performance by Nunavut-born throat singer Tanya Tagaq at the 2014 Polaris Music Prize awards. Slowly, our culture becomes more multicultural. After decades of bubbling under, issues around race and gender have come to dominate the media.

Indeed, the greatest and most promising difference between the boomers and the next generation might be the young’s complete embrace of diversity, whether it relates to race, gender, or sexual identity.

When her drink is done, Angela slips on her coat; she wants to get into the office early the next morning. Like most gen-Xers, it’s her diligence on the job that allows her colleagues to leave work early and hit the bar like this. Gen-Xers, born between 1965 and 1979, are the hard-headed resilient adults who quietly run everything.

They put up with the sporty boomers who never want to leave the party and the stubborn millennials who want to telecommute to work. It’s the gen-Xers who remember to put out the recycling bins – indeed, they invented recycling. They just don’t get credit for it. That might change with the international sparkle of one member of their cohort – Justin Trudeau. The 44-year-old prime minister has elevated the selfie-with-a-citizen to a portrait of a more open, warm-blooded style of governing, and his focus on aboriginal issues, climate change and a gender-balanced Cabinet has set an example for the rest of the world.

Gen-Xers tend not to complain about generational differences because they’re too busy getting on with their lives. (They rode the tail end of a friendlier economy, too.) But the young have good reason to complain; they are up against a harsher, more competitive and unforgiving world. The boomers were born into a carefree young adulthood, with jobs that grew on trees and a stable economy. Millennials now face the anxiety of climate change, unpredictable global markets and a world in violent political flux, gripped by wars and civilian upheaval. The only thing the boomers suffered in their youth was an excess of folk music, STDs and bad coffee.

A word about those STDs here, though. The arrival of the birth control pill in the 1960s, combined with the ridiculous concept of “free love,” created the sexual revolution, a belief that two people (or more) could fall in and out bed without obligation, guilt or consequence. Dream on!

That fantasy era was swiftly followed by the lethal early years of the HIV/AIDS epidemic, when the word “consequence” acquired a new and tragic weight. The pendulum swung back, gen-X had to sweep up after the party and sexual behaviour took a conservative turn. Until the millennials, Tinder and hook-up culture came along. Casual sex is back with a vengeance – made even more casual by our handy digital escape hatches. Getting “ghosted” by last night’s Tinder date (when s/he won’t reply to your texts) is probably just as painful as the days in the so-called sexual revolution, when women had carefree one-night stands and then sat by the rotary phone, patiently waiting for him to call. Sex doesn’t always obey generational rules.

And when did we begin to think in generational terms, anyway? The whole notion of a sharply defined, age-related cohort only goes back as far as our labelling of the “post-war generation.” The children of that wave became the boomers, and it was their rebellion against the risk-aversive values of their parents that created the first generation gap.

Next: I wouldn’t have dreamed of sharing my thoughts with my lovely parents

The gap was real. As a boomer in my 20s, I wouldn’t have dreamed of sharing my thoughts and fears with my perfectly lovely parents, who stood for everything I wanted to change about the world (then, didn’t).

But was that gap a precedent for future ones – or just an aberration specific to that era? “Talkin’ ’bout my g-g-g-generation,” sang The Who back in 1971. (And we never stopped talking about it!) But now, when I notice how close many young adults are with their parents or when I watch a campus rally erupting in applause for 74-year-old Democratic candidate Bernie Sanders, I wonder: maybe the phrase “generation gap” should be retired.

Maybe even the word “generation” has lost its relevance. As one 20-year-old woman instructed me when we met to talk about this subject, “Nobody thinks in terms of generations any more. I have friends of every age.”

Back at the Lo-Fi, it’s later in the evening. Angela has gone home. Sofi, the intern, has finished her shift and is doing some homework at an empty table. Wendel and Don have moved a little closer to the bar. Rooster’s playing some obscure R&B Don remembers from high school that Wendel is happy to discover. They’re watching the big flat-screen TV over the bar, where a Raptors game has just begun. The two men agree – if you’re over 40 on the basketball court, well, that’s a problem. But everywhere else, age isn’t what separates us any more.