Will We Ever Learn? 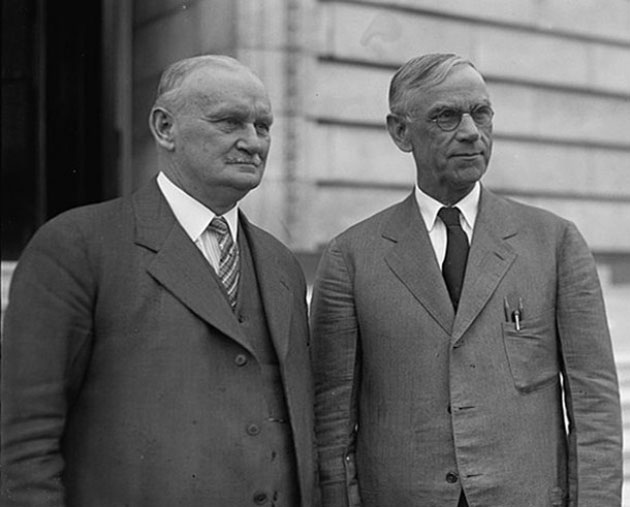 If Donald Trump’s political rhetoric on trade were to be followed by action, it would be ruinous for the global economy.

In 1930, the U.S. Congress passed the Smoot-Hawley Tariff Act. Its main goals were to protect American jobs and shield U.S. farmers from foreign competition. The men whose names were attached to the bill were Republicans—Reed Smoot, a senator from Utah, and Willis Hawley, a congressman from Oregon (pictured above). At the time the measure was being debated, just as the Great Depression was taking hold, Mr. Hawley predicted the bill would usher in “a new era of prosperity.”

The bill had one overriding purpose: to raise U.S. tariffs to levels that would make it almost impossible for foreign competitors to sell their products in the country. In all, it increased import tariffs on almost 900 products, in some cases by more than 60 per cent.

The measure received strong support from American workers, who were fearful of losing their jobs to an influx of cheap foreign products, and from politicians who saw the bill as a chance to score points with grassroots voters.

Does any of this sound familiar? It should. It’s exactly the same rationale that Donald Trump has been using very effectively to rally voter support. You’ve heard him over and over again on the nightly news, railing against companies like Ford for planning to build a new plant in Mexico, promising to tear up the North American Free Trade Agreement (NAFTA), and voicing his strident opposition to the proposed Trans-Pacific Partnership (TPP).

Next: Trump’s isolationist views on world trade were dismissed

Several months ago, when his candidacy was largely viewed as a publicity stunt that would go nowhere, Mr. Trump’s isolationist views on world trade were dismissed as drivel (which they indeed are). Now that it appears that, barring a bolt from the skies, he will be the nominee of the Republican Party, it’s time to get serious about his misguided policies.

I know it is generally assumed Trump will lose to Hilary Clinton in November. But it was also assumed he would never make it this far. Like it or not, he evokes a visceral response from many Americans. His promise to “Make America Great Again” touches a nerve deep within the national psyche. I saw it first-hand in Florida during the winter as well-educated, otherwise intelligent people turned rabid at any suggestion that Trump would be a disaster as President.

Unfortunately, if his political rhetoric on trade were to be followed by action, it would be ruinous for the global economy. All those hopeful workers who expect a resurgence in the high-paying jobs that were supposedly lost to China, Mexico, and, yes, Canada are in for a huge disappointment.

That’s what Smoot-Hawley was supposed to do. U.S. academics, manufacturers, and bankers knew the effect would be quite the opposite. In a 2008 article, The Economist quoted Thomas Lamont, a partner at J.P. Morgan at the time, as saying: “I almost went down on my knees to beg (then President) Herbert Hoover to veto the asinine Hawley-Smoot Tariff. The Act intensified nationalism all over the world.” The article also tells us that more than 1,000 economists signed a petition asking that the bill be quashed. Elsewhere, we read that Henry Ford spent an evening at the White House during which he told Hoover the bill was “an economic stupidity.”

Next: Other countries retaliated

Hoover didn’t much like the bill himself but under pressure from his party he ignored the pleas and signed Smoot-Hawley into law on June 17, 1930. Predictably, other countries retaliated. Canada raised tariffs on about 30 per cent of U.S. imports into this country. Ottawa also moved quickly to strengthen its trading ties with the U.K. and the rest of the British Empire.

Most economists believe the bill exacerbated and prolonged the Great Depression. Ben Bernanke, former chair of the U.S. Federal Reserve Board and a student of the period, said: “Economists still agree that Smoot-Hawley and the ensuing tariff wars were highly counterproductive and contributed to the depth and length of the global Depression.”

After winning the Presidency in 1932, Franklin D. Roosevelt, who had strongly opposed Smoot-Hawley, began the process of unwinding it but the damage had been done. It wasn’t until after the end of World War Two that international trade re-emerged as a positive economic force.

As a footnote, both Smoot and Hawley were defeated in the 1932 election after it became apparent that the “era of new prosperity” they had promised was nothing more than an illusion. Mr. Trump might wish to take note.