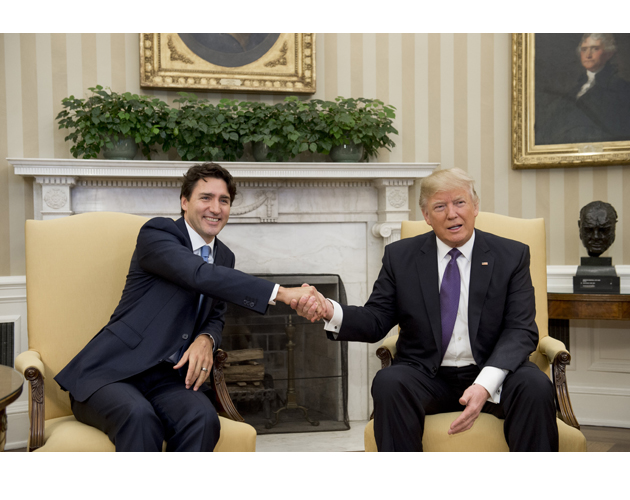 The much-anticipated first meeting between Canadian Prime Minister Justin Trudeau and U.S. President Donald Trump at the White House on February 13 was high on diplomatic courtesy but yielded little insight into how the two countries will work out their differences on several fronts, particularly trade and immigration.

Clearly missing was the jokey, hugging, back-slapping bond that developed between former president Barack Obama and Trudeau, when the two met in Washington back in March 2016.

After this meeting (which Trudeau described as “very productive” and Trump as “very, very productive”) came the joint statement containing the usual platitudes on the country’s close relationship.

Then, Trump and Trudeau delivered speeches highlighting their nation’s “shared values” on the economy, trade, environment and border security and their mutual desire to foster a close working relationship.

Justin Trudeau: We continue "our policies of openness towards immigration, refugees without compromising security” https://t.co/7UfMm9Nuow

Here are some of the key highlights from the press conference:

On the economy/trade
Trump: “[We need to] protect jobs in our hemisphere and keep wealth on our continent.” The President said he wanted to develop policies that would promote “reciprocal trade and shared growth.” He also maintained that any serious renegotiation of the NAFTA trade deal would come at Mexico’s expense, and not Canada’s.

Trudeau: The Prime Minister looks forward to many “groundbreaking economic partnerships” between the two countries. Likely referencing the Keystone Pipeline, Trudeau commented that, “Our nations are committed to collaborating on energy infrastructure and jobs.”

On immigration
Trump: “It’s a big, big problem. We want to have a big, beautiful open door but…”

Trudeau: “The last thing Canadians want is for me to lecture another country on how they should govern.”

On relations between the two nations
Trump: “America is deeply fortunate to have a neighbour like Canada. Canada and the U.S have shared values, love of freedom and a collective interest of defence. It is more important than ever that we strengthen our vital alliance.”

Trudeau: “No other neighbours in the entire world are as fundamentally linked as we are. Relations between neighbours are complex. And we don’t always agree.”

In wrapping up his talk, Trudeau invoked Winston Churchill’s famous quote on how the border between the two countries should be a model for the world.

“That long [Canadian] frontier from the Atlantic to the Pacific Oceans, guarded only by neighbourly respect and honourable obligations, is an example to every country and a pattern for the future of the world.”

However, the PM could just as easily have quoted another famous line his father, Prime Minister Pierre Trudeau, used when describing the often tenuous relations between the two countries.

“Living with you is in some ways like sleeping with an elephant: No matter how friendly and even-tempered the beast, one is affected by every twitch and grunt.”