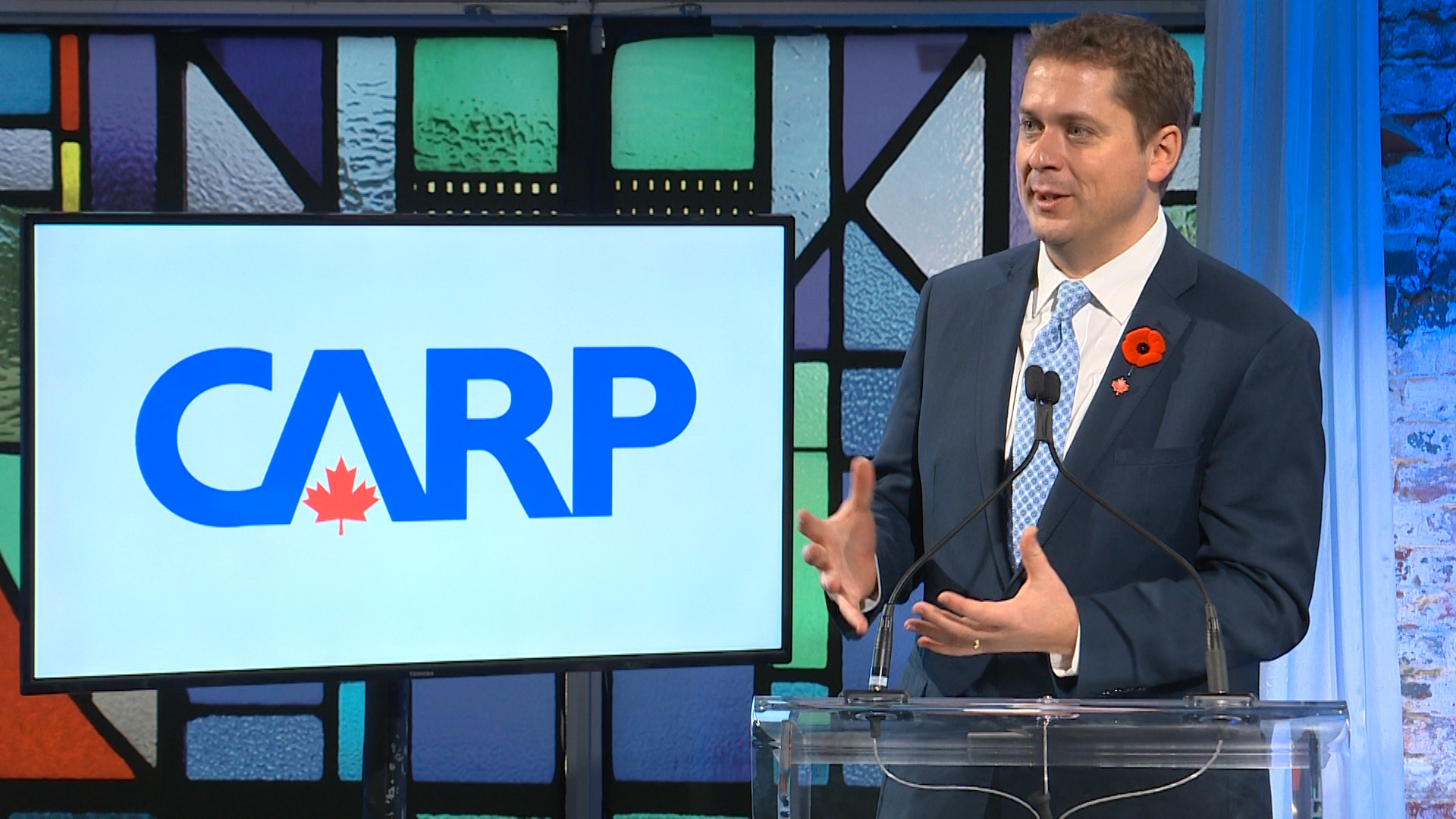 (In October 2017, Andrew Scheer participated in a CARP Town Hall where he outlined his party’s vision for seniors.)

Who is Andrew Scheer and where does he stand on seniors issues?

Since becoming federal Conservative Party leader in May, we really didn’t have that much information to go on. But Scheer formally introduced himself to older Canadians on Friday, providing the keynote address at CARP’s Annual General Meeting and Chapter Congress at the organization’s ZoomerPlex headquarters in Toronto. (CARP is an affiliate of ZoomerMedia.)

Speaking before CARP representatives from across the country, the 38-year-old Scheer not only used the 30-minute townhall-style event to share the broadstrokes of where he stands on seniors issues, but also to boost his profile, which lags somewhat compared to Prime Minister Justin Trudeau and NDP leader Jagmeet Singh.

CARP’s director of advocacy Wanda Morris introduced the Oppostion leader, noting that the last “political heavyweight” to address CARP is now the Prime Minister. Scheer joked that he would like to follow that “rite of passage.”

Coming across as a genial and confident speaker, Scheer – who’s represented the riding of Regina-Qu’Appelle since 2004 – admits that the Conservative message did not resonate to new voters in the last election. “We’re in a listening phase right now,” he said. “We lost the last election and we have to figure out what we did wrong.”

He said he wanted to use the visit to CARP to “send a signal that the issues facing seniors are important to the Conservative Party” and that he wanted to develop policies that help older Canadians but that mesh with “conservative principles.”

While Scheer reiterated that his party’s seniors policy hasn’t been costed or finalized, he did his best to reveal where they stand philosophically. And by the sounds of it, it looks like he’ll be mixing in new policies with those put in place under when Stephen Harper was Prime Minister.

The Opposition leader outlined his positions on:

While he’s still less than a year into the job, Scheer and his party realize that if they want to be a serious contenders in the next federal election, they’re going to have to tap into the massive clout of older voters. It’s why CARP has become a popular stop for politicians of all parties, hoping to tap into this voter-rich demographic.

In the 2015 election, however, this bulwark crumbled. Not only did many new voters begin to exercise their democratic privilege but many older Conservative voters fled to the Liberals. On the eve of the 2015 vote, CARP polls showed that Justin Trudeau’s Liberals had usurped support among senior Canadians, with nine per cent more supporting Liberals than Conservative.

While his party will obviously make continued attempts to reach out to seniors, Scheer says he prefers a multigenerational approach. “A lot of the issues younger people face also affect older Canadians.”

How well he meshes those two constituencies – younger and older – will largely determine his success in the upcoming election. With that coming up in October 2019, Andrew Scheer has got his work cut out for him.