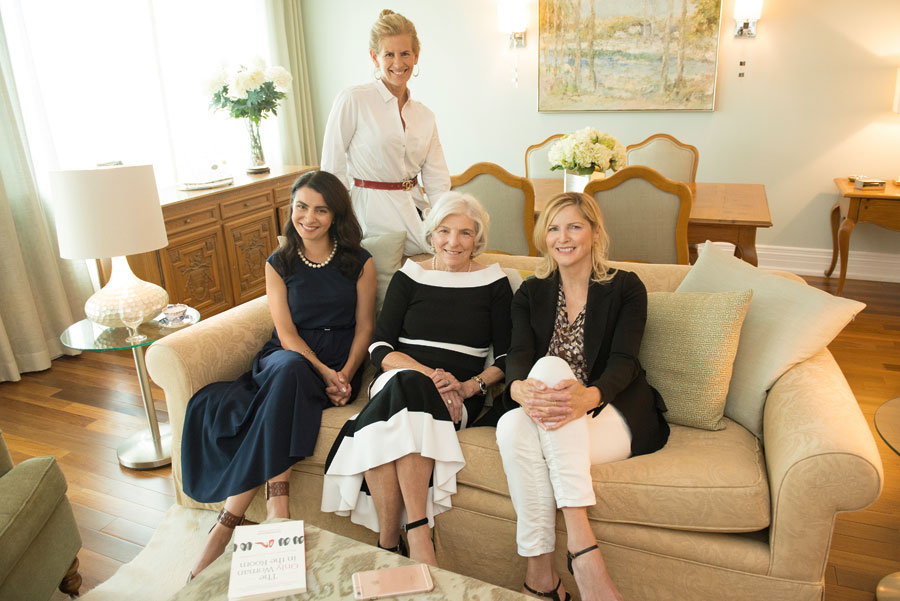 In The Only Woman in the Room: The Making of a Stockbroker, Jean Hough Davey recounts how she became one of the first women in North America to be licensed as a stockbroker, and her remarkable ascent to the highest levels of her profession. Starting out in the 1960s, in the heyday of the old boys’ club, a time when women were neither accepted nor encouraged to enter the fray of finance, Hough Davey was a pioneer.  As much a memoir as a portrait of an era, The Only Woman in the Room (which I cowrote with Hough Davey) melds together Hough Davey’s personal and business lives over the past 50 years against the backdrop of a Mad Men-style tableau of mid-20th-century manners and mores, three-martini lunches and all.

When I first began working with Hough Davey I felt embarrassingly short on knowledge of the markets beyond “Buy low, sell high.” Thus, my education began at the hand of a master. Fast-forward to today and, while I can’t claim to be further ahead with my investments, I know what it takes to succeed as a woman in the investment business: drive, smarts and relatability.

I recently sat down with Hough Davey, now 86 and retired, and two other female investment advisers (formerly known as stockbrokers), each at different stages of their careers, to compare notes on their experiences. Lori Livingstone, portfolio manager at Nesbitt Burns, is a 30-year veteran of the investment industry and one of the youngest recipients of the CFA designation, which she garnered at 26. Nancy Ammari, CFA and CFP, is a newly minted wealth adviser with ScotiaMcLeod, having spent the first 10 years of her career at Scotiabank in other divisions.

What resulted was a spirited discussion about what it’s like to work in a field that is still, remarkably, only 15 per cent female.

On motivation
O’Hagan: Nancy and Lori, you work for big banks, but you’re
actually entrepreneurs.
Livingstone: Right, we’re given all the resources, but it’s up to us to make it happen.
Ammari: Since I started I haven’t taken one single sick day. I can’t afford to!
O’Hagan: So it’s highly motivating?
Livingstone: Yes, it’s all up to you. You’ve got to keep your clients happy, find new clients and keep up on what the markets are doing.
Hough Davey: At a bank, you try to please the person above you. At an investment house, you’re trying to please your client.
Livingstone: That’s exactly right. I was at an event recently and was seated beside someone in commercial banking. She kept referring to everyone present as bankers. I finally said “I’m not a banker.” She didn’t get the distinction. I told her: “You get a pay cheque. That’s the difference.”

On looking the part
O’Hagan: Jean, in the book you describe your first meeting in the early ’60s at the brokerage that eventually hired you. You didn’t have any role models – there weren’t any. It was a solidly male field.
Hough Davey: I didn’t have any office attire, either! I just knew if I felt confident, it would help.
O’Hagan: What did you wear?
Hough Davey: I can see it perfectly: a black wool wrap coat with a shawl collar, a wide-brimmed leopard hat, black pumps, matching gloves and purse. It was my own idea of an appropriate look.
O’Hagan: And a suit?
Hough Davey: A dress. I always wore dresses. I didn’t want to look as though I was emulating the men.
O’Hagan: So now in 2017, Nancy, what do you wear?
Ammari: Dresses – but nothing too short.
O’Hagan: Lori, how has the dress code changed for you?
Livingstone: In the ’80s, it was the suit, it was the shoulders. You dressed a bit like a guy if you wanted to be taken seriously.
Hough Davey: Was it any different in New York?
Livingstone: I was in New York during the dot.com boom at a firm where, until just the year before, it was mandated that women wear pantyhose. This
was the ’90s! At one point, the senior partner was questioning my “look,” so I bought a skirt suit in a beautiful grey flannel. He went out of his way to compliment me. Of course, the skirt was short. He just wanted the women on staff to show their legs.

On sexual harassment
O’Hagan: Speaking of which, sexual harrassment is all but dominating the news since the Weinstein story first broke, so I’m curious about your experiences in that area.
Hough Davey: Well, in my early years, it was a given. There was at least one male predator in every office.
Livingstone: The men could be pigs, no doubt about it. Strippers and hookers were definitely part of the culture. And lots of sexual commentary about women.
Hough Davey: It could also be very subtle. A knowing smile, a compliment, a conversation about your boyfriend. But no matter how small the advance, a woman is left with a dirty feeling, ashamed, and then a very “alone” feeling because there was no one in the company you could go to.
Livingstone: The most impactful experience I had was in the late 1980s. I had a boss who worked very late and expected me to as well. He would come to my office and tell me personal stories about his unhappy marriage. I never took the bait. He subsequently became extremely difficult – verbally abusive. I got myself moved to another part of the organization.
Hough Davey: It’s disappointing to me that this is still happening.
O’Hagan: And Nancy, you’re so new to it. How is it for you?
Ammari: I’m so lucky that I’ve never had to deal with sexual harassment in my career. My heart goes out to those who did and may still do.

Luck vs. Skill
O’Hagan: Jean, you bumped into a guy in a restaurant in the late ’80s just after you made a record-breaking sale. The word was out. It was in the newspapers.
Hough Davey: Yes, and he said: “We all get lucky sometimes, don’t we?” It was maddening!
O’Hagan: Nothing about your ability. Have either of you had that same experience?
Livingstone: No, not at all. The one thing about what we do is the numbers speak for themselves. There’s no grey area. In other jobs I’ve had, if the boss liked to hang out and play golf and didn’t really respect women, it was a problem. But now my clients are my bosses. They’re the only ones I need to be concerned with.
Hough Davey: True enough. I always felt that’s the beauty of numbers. They speak for themselves. They’re not male or female.
Ammari: When I first started, someone said to me this industry is 30 per cent hard work, 30 per cent knowledge and 30 per cent luck. And it’s very competitive, whether you’re a man or a woman.
Hough Davey: But I remember in the ’80s when I was third or fourth in sales in the whole firm nationally, and they were giving out awards. Mine was Most Popular because “everybody loved me.” Nothing to do with performance.

Men are from Mars
O’Hagan: In Jean’s Lessons Learned, she writes: “It’s a mistake to make generalizations about people’s talent, performance, patterns and emotions in the workplace. Everyone’s different … There are women who are patient and thoughtful, and others who are aggressive and talk too much. Are all women subtle, persuasive or better at relationship building? And what about men who don’t fit the testosterone mould? The ones who can’t close the deal? Every client requires a different approach.”
Ammari: I totally agree.
O’Hagan: So you have to look at men and women as opposed to men versus women.
Livingstone: Jean, when you were still working, I’m curious about your split – men versus women?
Hough Davey: I had very few women as clients. Although there were far fewer people investing at all.
Livingstone: Yes, also in the ’60s and ’70s, fewer women were working, and more people had pensions. It was just a small minority of people who were investing.
Hough Davey: That’s right.
Livingstone: So, only now are female investors becoming a force. And all of the firms are trying to figure out how to better engage women because studies show that women feel misunderstood, and 80 per cent of women leave their investment adviser when their husband dies.
Ammari: It’s because the investment adviser is always talking
to the male. A couple sits there, and the adviser talks directly to the male.
Hough Davey: Imagine what it was like in my day!
Livingstone: It’s pretty obvious why there are still so few women in the industry. Look around – it’s the culture. It hasn’t changed since the 1960s.
Hough Davey: I was always assigned the female clients, but that never made sense to me.
Livingstone: Women just want someone they can trust, right?
Ammari: That’s so true.
Livingstone: I’m very focused on women clients right now because demographically more women are divorcing and, if they haven’t previously been engaged in this, they need significant help. And I’m passionate about women building responsibility.

Money is Emotional
O’Hagan: So what makes a good investor? Experience? Intelligence? Intuition?
Livingstone: Most people’s biggest problem with investing successfully is behavioural. The issue is when there’s a crisis and people freak out and sell everything. People need to stay away from their money. It’s too emotional.
O’Hagan: What’s the fear factor in your job? You must need to be super confident.
Ammari: My husband is a contractor. He says “Measure twice, cut once,” and it’s the same for me. You want to make sure you’re doing the right thing, your execution is on par. Check it twice, do it, move on.
O’Hagan: So it’s a mindset.
Ammari: Exactly.
O’Hagan: Have you ever made any big, serious mistakes?
Livingstone: The technology is there to save you from that.
Hough Davey: I always say a good broker will be right 80 per cent of the time.
Livingstone: That’s being very generous.
O’Hagan: Well, that was pre-technology. It’s a more rigorous world now.
Livingstone: I think it was more fun back in Jean’s day. Whatever information you had on companies, you had to learn it. You were in demand. Clients needed you. And you could actually get information. You could take a CFO to lunch.
Hough Davey: I think you’re right!
Livingstone: The difference now is the 24-7 financial media. But if you’re watching CNBC or BNN all day, you’re going to make bad decisions. It comes back again to behavioural issues. And one of the biggest mistakes is to not sell. Loss aversion!
Hough Davey: I’ve always said that a good psychologist would make a wonderful stock broker.

Marrying Mr. Right
Livingstone: Don’t you think marrying the right guy is one of the most important decisions for your career?
Hough Davey: And the opposite, too – it’s what I wanted to get across in my memoir. If you’re in the wrong marriage, get out.
Livingstone: Your story is interesting because your first husband wasn’t ambitious and resented your success: that’s classic. Then you married a man who was terribly controlling, right?
Hough Davey: It was emotional abuse. He was actually a psychopath, but I didn’t understand that at the time.
Livingstone: I only worked for them. I never married them!
O’Hagan: But then Jean married the love of her life at 65.
Hough Davey: Yes, that was true love. That helped me regain my confidence because when you’ve already left two husbands, you think “What’s the matter with me?”
Livingstone: I’ve heard this so often: when women make more money than their partner, the partner will be demeaning, put them down, make them
feel worthless.
Hough Davey: That was me – exactly my situation.
Livingstone: So you were trying to warn women in your book.
Ammari: It’s great that you came forth with it because it could help a lot of women who would relate to your story.