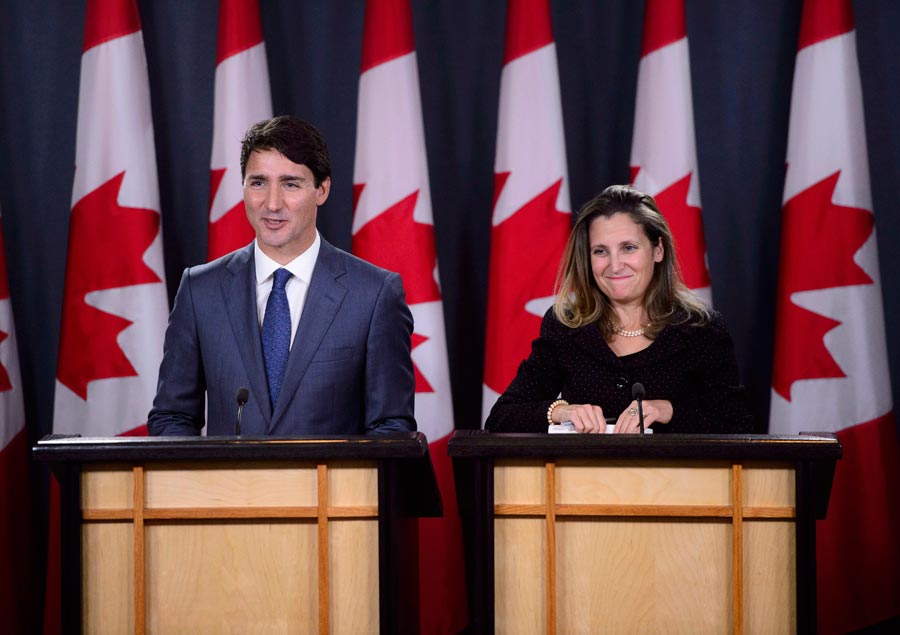 “It’s a good day for Canada,” Prime Minister Justin Trudeau said with great relief on Sunday night, after ending a year-and-a-half of torturous negotiations and finally hammering out a new free trade deal with the U.S. and Mexico.

The new deal, which was finally agreed to after hectic last-minute negotiations made necessary for making the Sept. 30 deadline, will now be known as the United States-Mexico-Canada Agreement (USMCA). Today, in a press conference in the National Press Building in Ottawa, the Prime Minister and Foreign Affairs Minister Chrystia Freeland celebrated the new deal.

“When your trading partner is 10 times your size, you need rules. You need a level playing field,” said Trudeau. “Modernizing NAFTA was no easy feat. We had to make compromises. But it will be good for Canadian workers, Canadian business and Canadian families.”

A visibly upbeat Foreign Minister thanked ther “amazing” negotiators she worked with to finalize the USMCA. “It’s been 24-7 for a lot of people for a long time.”

“Jobs will pour into North America. It’s good for Canada, good for Mexico,” said a triumphant President Donald Trump, in a press conference in Washington today that started trumpeting the USMCA but quickly devolved into a bizarre defence of his Supreme Court nominee Brett Kavanaugh.

Here are key points in the USMCA:

The two major sticking points – which Trudeau referred to as “uncertainties” – include the tariffs on steel and aluminum, which remain in place, and the increased access U.S. dairy farmers will now have to Canadian markets.

The end of dairy protectionism is likely to become a thorny issue in Quebec, where the majority of dairy farmers are located. Dairy industry representatives are already accusing the government of sacrificing that province’s dairy sector to sign the new deal despite assurances from both Trudeau and Feeland both reiterated that the supply management system will remain in place and that dairy farmers will be “fully and fairly” compensated for all loss of market share.

Now that a deal has been agreed to in principle, there’s hope that it will mark an improvement in relations between the two countries, which have deteriorated mainly because of Trump’s inclination to bash at Canada every chance he gets.

Throughout the year-and-a-half-long negotiations, he’s pilloried Trudeau on countless occasions, described the Canadian negotiators as refusing to make concessions, and demonized Canadian dairy farmers for hiding behind protectionist tariffs.

During his press conference today, Trump described his relationship with Trudeau during the negotiations as “testy at times” but said that it was due to Trudeau trying to do the best for his country.

Trudeau, for his part, said he had a positive call with President today and acknowledged that negotiations had been a “challenge.” However, he added that it was time to “move forward” now that negotiations were complete.

Trump said the deal should foster “a better spirit between the three countries.” Whether the President takes these words to heart, remains to be seen.