Money Smarts: The Drawback of Holding Too Much Cash 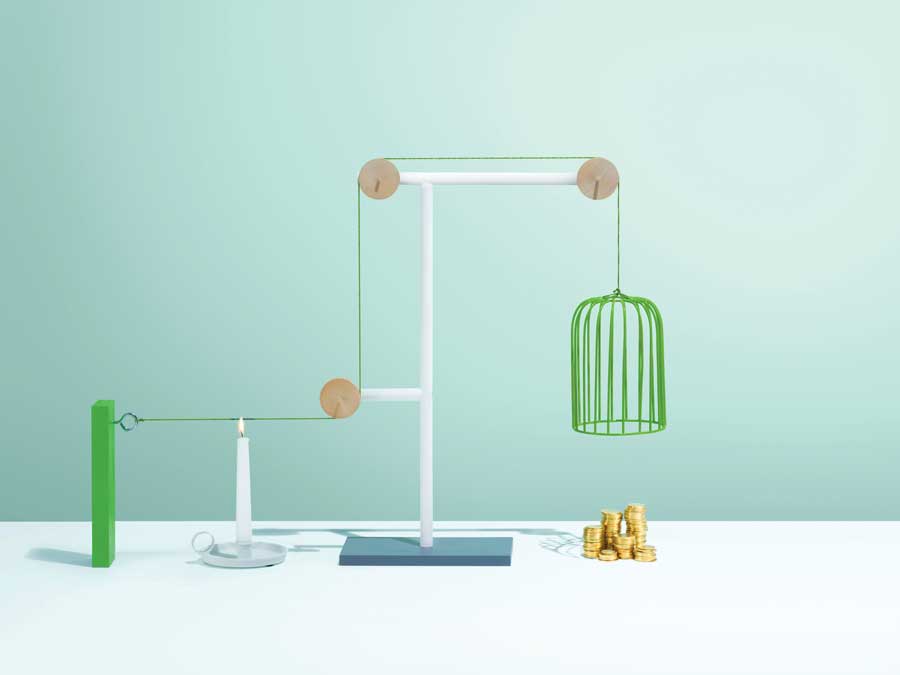 All investing and, you could say, all life is a balance between taking chances and playing it safe. That’s as true of business as it is of crossing the street, buying a car or a washing machine – something with an expected service life or putting cash into an asset like a stock or bond with the idea that investing and thus leaving less money for buying things today will make for a better, brighter tomorrow.

Spend now, and you have less to invest for the future; invest now and you will have more to spend in the future. It is a decision we make every year and every day. But in your 50s, when most people start to think seriously about retirement, the question comes to a head: spend now for pleasure and maybe have less in one’s 60s and beyond, or spend less and squirrel away money for the years of retirement when most of us will be living on pensions and savings. The irony is that, heading into retirement, many people become too risk-averse and carry far more cash as a reserve than they need.

The problem is balance. And that is all about risk. Risk cleaves on age. If you were only worried about tomorrow, the next day, you could reasonably hold 100 per cent cash and no other investments. Ironically, if you hold cash for 20 or 30 or 40 years, you are guaranteed a loss to inflation and probably to the opportunity loss of not being in assets like stocks and bonds that do much better than cash over periods of many years.

Spending comes into the picture, too. Folks from ages 20 or 30 or 40 have a lot of future, so they tend to be spenders today and not so much worriers about tomorrow. They have children, pay off their mortgages and cars, buy vacation homes. They are putting money into assets other than retirement accounts.

But in what you could call a mid-life swap in thinking, as we approach 60, many people tend to see huge risk in giving up what they have now in cash or taking on debt to make investments. They (correctly) see that they have less recovery time. Having a lot of cash becomes less of an investing problem and more a reason to keep their financial powder dry. You could say that the pleasant expectation of gain declines just as the comfort of having a tidy sum in the bank rises. And it makes sense, for if one’s career end becomes visible in the 50s, the goal shifts to the future, to piling up a reserve to last for decades.
In the pure investment sense, being older means that there is less time to recover from investment misfortunes. The relative ease with which people buy mutual funds or actual stocks and bonds or packages of investment assets in exchange-traded funds morphs into a fear, which is reasonable, that they may flop just when money is needed.

A retired former factory worker who we’ll call Ernst, 64, puts it succinctly. “I prefer to have inflation eat away at my buying power than risk losing it in stocks or bonds. So I keep my money in cash at the bank.” He speaks for many other seniors.

In May of last year, the Financial Planners Standards Council and advisory firm Credit Canada together with marketing firm Leger released a report called Seniors and Money. The report illuminated the finances of Canadians age 60 and above. Among 1,000 respondents, 45 per cent said that running out of money and not being able to pay for such things as long-term care were their leading financial concerns. Therefore, they tend to have high savings or chequing balances.

The paradox is that by holding cash, they assure that inflation will eventually turn good fortune into misfortune. They sacrifice much higher returns on stocks and even bonds. As Jeremy Siegel, a noted scholar of business cycles, has shown, for holding periods of 10 and 20 years, returns on stocks beat interest-bearing bank deposits 83 per cent and 99 per cent of the time respectively. The thing is – you have to have a decade or two to make this safety net work.

Fear of having no money at hand drives many people, especially seniors anxious about years of retirement on fixed incomes, to hold huge amounts of their assets in cash. Economists call this taste for cash “liquidity preference.” It is the technical name for what amounts to stuffing cash into a mattress. The comparison is not far off, for money in a bank or credit union earns so little these days that it does not seem like an investment. Yet, having a lot of cash provides a sense of security.

“Cash is like a medicine that prevents worse things like having to borrow when times are tough and a lender may not even grant credit,” explains Don Forbes, head of Forbes Wealth Management in Carberry, Man.

That is the emotional side of preference for cash. Financial intermediaries play on it, selling cash alternatives like pre-paid funerals and even discounted future vacation costs packaged in time-shares. People also buy annuities, which are contracts made with insurance companies to provide a known and fixed income for a term of years or life or the last to die of spouses on terms that are seemingly attractive but that really are based on relatively low-interest returns. Many people will pay a literal fortune to eliminate uncertainty. The irony is that, often, estimating income from government programs like Old Age Security and the Canada or Quebec pension plans, company pensions and your own assets removes much uncertainty and the need or wish to fork over huge sums to buy annuities that, in the end, pay only a trickle and seldom cover inflation. It is all about certainty or the lack of it.

Too little money in the bank when bills have to be paid could mean borrowing from the same bank at a high rate on a home equity loan or spending on a universal credit card like Visa at a typical 19 per cent a year or, worst of all, going to a payday loan company and suffering exorbitant interest and service charges that can be more than 100 per cent. A CBC report in 2017 showed that a $1,400 payday loan required repayments totalling $10,000 in interest. Lack of cash could even force one to a pawnshop or, for some, a path to a reverse mortgage. That’s pawning one’s home by another name.

On the other hand, holding too much cash is very expensive. Farmers heading into retirement, Forbes’ main clients, often have several hundred thousand dollars in the bank. Their cost is perhaps one per cent the money could earn in bank interest versus six per cent in bank stocks or utilities paying four per cent dividends plus a conservative two per cent share price growth. Thus, on $500,000, the difference, five per cent, could be $25,000 before tax in just one year. For longer periods, using $100,000 in the bank for five years, the potential cost – the opportunity cost as economists like to call it – with just one per cent coming from a savings account or short term GICs compared to four per cent in a very conservative mix of stocks and bonds, the difference, three per cent, compounds to $15,927 in five years. That’s a kitchen reno or a winter holiday. It’s the cost of having too much cash. It can be huge, as our example shows.

Caroline Nalbantoglu, a financial planner who heads CNal Financial Planning Inc. in Montreal, says that many of her retired clients are uncomfortable holding less than $100,000 in their bank accounts. “If they have no pension plans or if they are dependent on their investments, they tend to hold a few years of income in the bank,” she explains.

Perversely, the low interest rates prevailing in the economy drive people to hold higher cash balances. People tend to keep more money in the bank to get a specific amount of interest. Yet, in safe bonds or even dividend-paying stocks, less money could pay as much or more.

This is the finding of a research paper, “A Time-Series Perspective on Safety, Liquidity and Low-Interest Rates,” published in February last year, by the Federal Reserve Bank of New York. The problem, said the report, is that people accept the low return of government short-term bonds for “convenience and liquidity.” Government-insured savings accounts have similar low returns. Moreover, cash is a kind of insurance. In the short run, before inflation gores its value, it makes people feel good.

“High cash balances are a security blanket, both in fact and in spirit,” says financial planner Derek Moran, head of Smarter Financial Planning Ltd. in Kelowna, B.C. “But the irony is that if retirement pension income from company plans and from retirement savings are sufficiently reliable, then one may be able to reduce the amounts of cash needed. Moreover, with the kids gone and the house paid, there may be more free cash flow. People who have cash balances appropriate to the time they were working should review their needs. They may need less cash in the bank.” The gain, needless to say, can be appreciably higher income that will reduce the need to have a small fortune in the bank.

There is a bottom line to all this planning: liquidity has a cost. Manage your need for cash, and you won’t have to sacrifice investment or other income.

How much liquidity will you need?

How to build a layer cake of assets to produce investment income, liquidity and growth