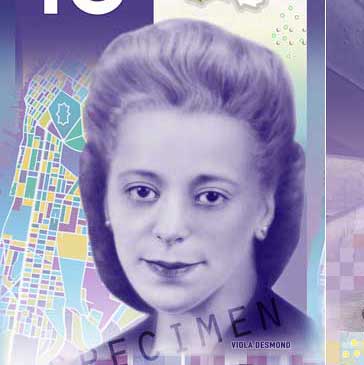 Photo courtesy of The Bank of Canada.

The Canadian banknote featuring civil rights activist and businesswoman Viola Desmond was given the 2018 Bank Note of the Year Award by The International Bank Note Society this week.

The $10 note was selected from a list of 15 finalists, which included entries from Argentina, Armenia, Australia and Bolivia.

The banknote first went into circulation in 2018, more than 72 years after the civil rights pioneer refused to vacate her seat in a whites-only section of a movie theatre in New Glasgow, N.S.

The activist and businesswoman is the first Black person and the first Canadian woman to be featured on a regularly-circulating Canadian banknote.

In 1946 — nearly a decade before Rosa Parks refused to give up her seat on a bus in Jim Crow-era Montgomery, Alabama — the 31-year-old Desmond refused to leave her seat in the whites-only main floor of the Roseland Theatre in New Glasgow. The police were called and Desmond was arrested and thrown in prison, where she spent 12 hours.

She was later prosecuted for trying to defraud the provincial government of one cent — the difference in sales tax between tickets sold for the balcony and main floor.

Despite offering to pay the difference, Desmond was convicted and fined $26. At the trial, where the owner of the theatre acted as prosecutor, Desmond defended herself without representation.

A lawsuit she later filed against the movie theatre and it’s manager didn’t make it to trial and an application to the Supreme Court to have her criminal conviction expunged was dismissed.

It wasn’t until 2010 that Nova Scotia gave Desmond — who died in 1965 at the age of 50 — a posthumous pardon and public apology for her wrongful conviction.

The $10 bill was also the first vertically-oriented banknote in Canada and includes a map of the city’s north end, home to one of Canada’s oldest Black communities, where Desmond started her career as a beautician by opening her first beauty parlour.

While her brave protest earned her the reputation as the “Canadian Rosa Parks”, Desmond was also influential as a cosmetics pioneer for Black women in Atlantic Canada.

Born and raised in Halifax, Viola Desmond first trained as a teacher but soon followed in the footsteps of her father, who owned a barbershop. Along with her husband, she opened a beauty parlour that offered the services of a barbershop and hairdressing salon.

The straight hair often seen on black women today, became popular in the early part of the 20th century and was largely fuelled by European standards of beauty. With the need for services to maintain straightened hair and an increased emphasis on fashion trends and personal grooming during that time,  entrepreneurship through beauty parlours became a vehicle of upward mobility for black women.

After expanding her beauty parlour business across the province, she founded her own institution, Halifax’s Desmond School of Beauty Culture, which encouraged Black women to participate in the booming beauty industry.

Decades before Ebony Fashion Fair, Iman Cosmetics, MAC Cosmetics and Rihanna’s Fenty Beauty line, Desmond also created a line of cosmetics made for darker skin, which was often sold in stores owned by graduates of her program.

The $10 banknote also includes a picture of Winnipeg’s Canadian Museum for Human Rights, an excerpt from the Canadian Charter of Rights and Freedoms and an eagle feather.

According to the Bank of Canada, Desmond’s legal challenge against racial segregation was the first one brought forward by a Black woman in Canada. The publicity from her case was a catalyst in the long fight to legally end segregation in Nova Scotia, which was finally achieved in 1954.

In addition to the the notes unique design features, the IBNS noted the bill’s use of innovative technologies, which make it difficult to counterfeit.

Canada last won the award in the competition’s inaugural year in 2004 for the $20 bill that was released as part of the Bank of Canada’s Canadian Journey series.