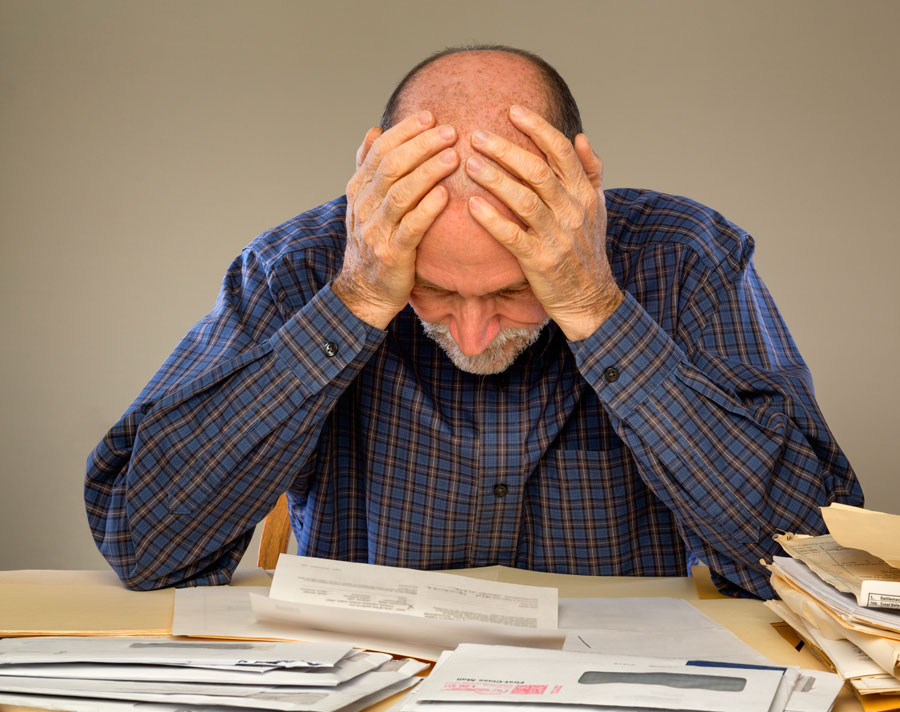 Filling out your tax forms can be a headache-inducing experience. Photo:

For those of you who are trying to work up the fortitude to file your 2019 income tax, we’re here to help. Here are eight tips geared toward seniors (those who turned 65 on or before Dec. 31, 2019) that should take some of the sting out of this annual ordeal.

“For seniors, it’s kind of a good news/bad news situation,” says Lisa Gittens, a Senior Tax Professional at H&R Block. While there are no new credits or deductions this year, there are ways to ensure you get the most from your return. So whether you’re an income-tax ninja or are paying attention to your returns for the first time, here are eight tips to help you get started.

Obvious advice? Sure, but many people choose to avoid the aggravation, either because they don’t have income to report or they just can’t muster the energy. “We stress to everyone the importance of filing your taxes every year,” says Gittens. She notes that if you’re receiving CPP or OAS and you don’t file on time, you’ll get a letter from the Canada Revenue Agency saying your benefits will be interrupted until they receive your return. And if you’re receiving GIS, you’re required to send a copy of your return or assessment in order to keep qualifying for the supplement.

Pay your instalments on time

A lot of seniors have income from which there is no tax deducted. If you owe more than $3,000 in tax at the end of the year, you’ll get a notice from the CRA to make instalment payments, which are due in March, June, September and December. You must report these instalments on your tax return so the government has a record of them. Gittens reminds seniors of the importance of paying their instalments on time — you will incur interest on late payments.

Split your pension for tax savings

If you’re receiving a private or company pension, Gittens suggests lowering your tax bill by splitting it with your partner. Here’s how it works. Say John is making $60,000 a year in pension income, which puts him in a higher tax bracket. If John’s partner Sue is not receiving a private pension, when he files his taxes he can split up to 50 per cent of his pension with her. This means that instead of John reporting $60,000 on his return, he’ll report $30,000 and Sue reports the other $30,000 on hers. The primary benefit is they pay tax at the lowest possible rate on the income. The added gain is both spouses will now qualify for the Pension Income Credit, which makes $2,000 of that pension income automatically non-taxable. The result is a lower tax bracket for John, and both he and his spouse can claim the Basic Personal Amount, the Age Amount credit (if they’re over 65) and the Pension Income Credit. To qualify for pension income splitting, you must be over 65, a resident of Canada and currently living with your spouse.

No private pension? Split your CPP

Even if you aren’t receiving a private pension, Gittens says you can split your CPP income with your spouse or partner. This works like pension-income splitting in that it reduces the tax bracket of the higher-earning spouse. However, it only makes sense if the higher earning spouse is making more than $60,000 and both spouses are living together now and at the time you were contributing to CPP. Gittens notes that you must do this before you file your return. For more information, visit a Service Canada office and fill out an ISP-1002 form.

While most of our health costs are covered by provincial insurance, there are numerous extra expenses such as prescriptions, dental bills, hearing and walking aids, medical marijuana and, for snowbirds, out-of-country travel insurance. One way to organize your bills is to go to your pharmacy at the end of the year and ask for a printout of everything you spent on prescriptions and medications. Claiming all medical expenses is especially important for seniors with a low income (under $30,000). They may qualify for a 15% non-refundable credit for medical expenses, as well as a refundable medical expense supplement. “If their medical expenses are high in comparison with their income, they can get an actual refund in their pocket,” says Gittens. “A lot of seniors miss that.”

If you’re 65 and older and have and are dependent on your children assistance for a short-term physical or mental impairment (for example, you’re recovering from a car accident or a minor stroke), the family members looking after you can claim the Canada Caregiver Credit on their tax return. Don’t confuse this with the Disability Tax Credit, which covers people who suffer from “severe and prolonged impairment in mental or physical functions.” To qualify for the Canada Caregiver Credit, your children don’t have to be residing with you but will need some kind of documentation from a doctor or hospital. “You don’t have to file this on their return but you should keep it on hand in case the CRA contacts you,” says Gittens.

If you lived and worked outside Canada, you may start receiving a foreign pension when you turn 65. Canadians must report this income on their tax return. These pensions will be taxed differently, depending on when you receive it and the country where it originates. “If this is the first year you’re receiving a foreign pension, I really recommend you sit down with a tax professional,” advises Gittens. “Make sure that you’re filing it correctly based on the country, the type of pension and whether or not there’s a tax treaty in place.” Failure to do so could have serious tax consequences.

If you own property outside of Canada, such as a private-use condo that serves as your winter getaway, you must file the  T1135 Foreign Income Verification Statement. You have to report the value of your property and in which country they’re located. While there are no tax consequences for reporting the property if it’s for personal use, you will be subject to penalties and interest if you fail to report it. Foreign property is not limited to real estate but can include: money held in a foreign bank account, shares or bonds held in a foreign company, or a life insurance policy from a foreign issuer.

Q&A With Gordon Pape: Will A Spousal RRSP Reduce My Tax Bill?

New Year, New TFSA Limit, and How You Can Use CoPower Green Bonds for Tax-Free Income