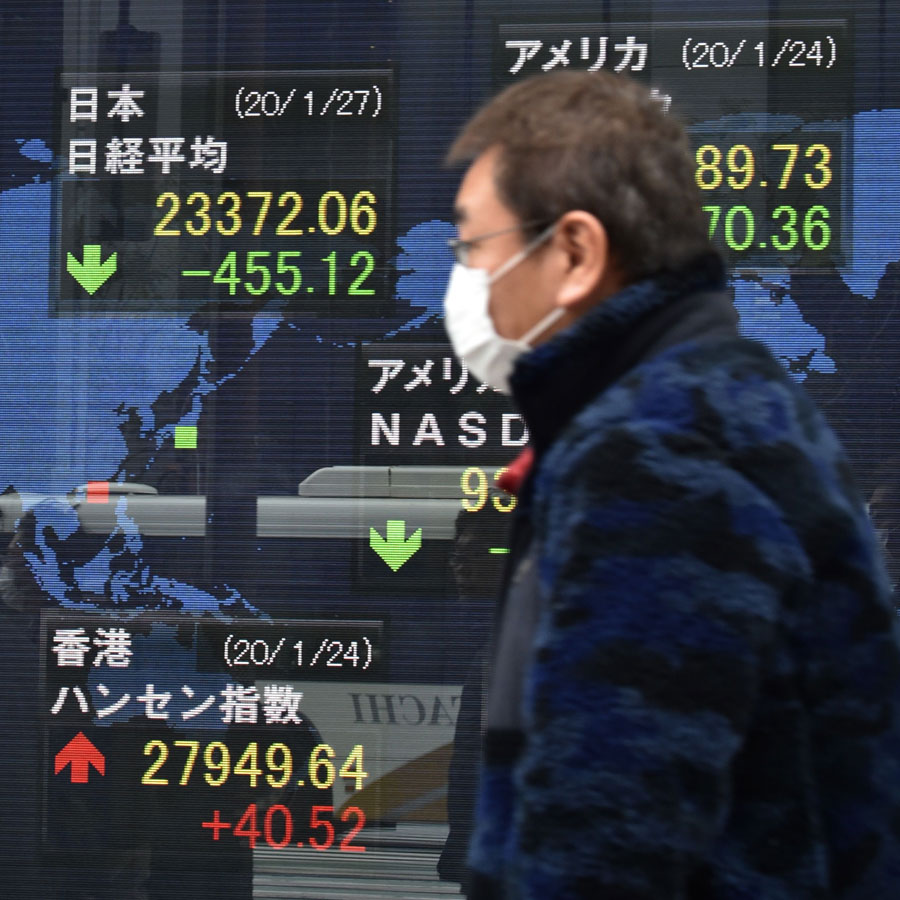 China's struggle to contain the coronavirus outbreak is having a ripple effect on the world's economy. Photo: Kazuhiro Nogi/AFP/Getty Images

As the number of coronavirus cases continues to grow, and health authorities prepare for the worst-case scenario, jittery investors are expressing their fears and sparking a sell-off in financial markets around the world.

Stock markets around the world continue to reel as worried investors react — or possibly overreact — to the potential negative impact the coronavirus could have on the economy.

In Toronto, the TSX continued its downward trend, as did the DOW on Wall Street, the FTSE in London, the DAX in Germany and the Nikkei in Japan. It was the worst week on the global market since 2008, when the Great Recession hit.

Coronavirus, an illness that originated in China but has since spread, has already infected more than 80,000 people, causing around 2,700 deaths worldwide at the time of publication. The epicentre of the virus continues to be in China, but the economic shock effects happening there are beginning to reverberate on businesses and stock markets around the world.

The human health toll caused by the disease — mass quarantines and fear of contracting the illness — has dealt a blow to China’s economy, particularly its massive manufacturing complex.

As the China economy (the world’s second largest economy accounting for 17 per cent of the world’s GDP) is impacted by coronavirus, it’s sending shock waves throughout the global economy. Fear of contracting the illness has seen many Chinese opt to stay at home, crippling the retail and entertainment industries. And because of quarantines, many factory workers aren’t showing up — according to one report, as many as 80 per cent of manufacturers were unable to staff their production lines. As factories operate well below capacity, production is down, and many foreign companies that depend on Chinese supply chains are beginning to feel the pinch. Jaguar Land Rover, for example, issued a warning that it could run out of car parts in its British factories by next week.

While the number of coronavirus cases have seemingly peaked in China, countries around the world are preparing for the disease to spread. That’s causing a great deal of fear mostly because we just don’t know how widespread the illness will be nor how well we’ll be able to contain it.

This anxiety — along with the economic slowdown in China and a prevailing belief that the market was due for a correction anyway — have all combined to put investors in a selling mood. While investing guru Warren Buffett cautions against making your buying or selling decisions based on “today’s headlines,” the nervous mood of investors will largely determine the short-term effect on markets.

The following sectors will experience temporary disruption as the effects of the illness unfold.

Because many high-tech companies have invested heavily in Chinese supply chain, they are particularly affected by any slowdown in manufacturing. Apple, which manufactures about 30 per cent of its iPhones at a Chinese plant, sent an ominous warning to investors, saying that due to coronavirus outbreak in China, “Worldwide iPhone supply will be temporarily constrained.” Apple shares were down today despite the company sending a positive note that:  “Apple is fundamentally strong, and this disruption to our business is only temporary.” Chipmaker Qualcomm caused minor selloff after investors were spooked by a comment made by a company representative that the coronavirus was causing “significant concern” with its Chinese operations.

In the auto sector, Hyundai, Ford and Nissan have all closed factories in China, which will hurt supply and sales in the short term. While GM has admitted to parts supply shortages from China, it remains hopeful that it will not affect its North American factories. And Canada’s already beleaguered energy sector, which relies heavily on exports to China, are experiencing a downturn in demand. Speaking in Calgary, Finance Minister Bill Morneau said that exports of crude oil to China have dropped by 15 per cent since the virus outbreak, noting that it’s a situation to which “we are paying very close attention in Ottawa.”

But it’s not only company supply chains that are being affected by the virus. Clothing retailers, luxury goods manufacturers, high-end fashion brands and tourism sectors have also been hurt, as the demand from the wealthy Chinese market has been severely constricted. Fear of the virus has seen many of mainland China’s retailers close their doors as shoppers are simply staying at home rather than risk being infected. Nike and Adidas, for example, which rely on a strong Chinese retail market  have been forced to close a number of their stores in China and warn investors about the effect on revenue. The CEO of McDonald’s, which has shut 300 stores in mainland China, issued a statement saying, “China is a critical market for us, and we’re very concerned about the situation over there.” Other restaurants like Starbucks have also closed half its 4,300 locations and also suggested that the “the dynamic situation our partners in China are navigating” could effect “near-term business results.”

Airlines around the world are also being hit hard by travel restrictions to the lucrative Chinese market. Air Canada announced today that it would be “extending the suspension of its flights between Canada and Beijing and Shanghai until March 27, 2020 … following the Government of Canada’s Jan. 29, 2020, advisory discouraging non-essential travel to China.”

The cruise line industry has been hit hard, after the Diamond Princess Cruise ship has been quarantined in a Japan port for two weeks after an outbreak of coronavirus onboard. Many cruise lines have dropped any stops in Chinese ports. Norwegian Cruise Lines has stipulated that “guests who have travelled from, visited or transited via airports in China, including Hong Kong and Macau, within 30 days of their voyage embarkation, regardless of nationality, will not be allowed to board any of our vessels.”

The Coronavirus Outbreak Will Hit the Tourism and Travel Sector Hard

Just How Dangerous Is the Coronavirus Outbreak? How Social Media Is Changing Research and Reactions