After a Devastating Flood Crippled Her Business, Arlene Dickinson Needed to Look Back to Move Forward 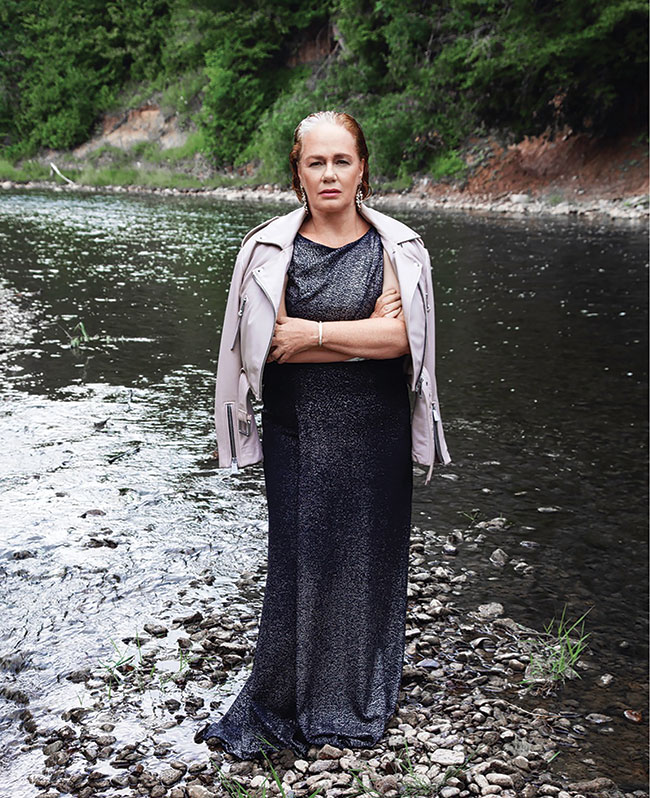 The 2013 Calgary flood was epic. Heavy rain on top of melting snow in the Rocky Mountains rushed into the rivers below, and the biblical-sized onslaught killed five people, displaced 80,000 and caused as much as $6 billion in property damage and financial losses.

In the opening pages of her new book Reinvention: Changing Your Life, Your Career, Your Future, Canadian entrepreneur and venture capitalist Arlene Dickinson admits she didn’t heed a warning to evacuate her office, thinking Venture Communications — outside the downtown core and far from the raging Bow River — was safe.

By the next day, the basement offices in the converted schoolhouse were flooded to the ceiling, and traumatized employees scrambled to find places to live and work. An IT staffer grabbed backup servers on the way out, but in the chaos that followed, Dickinson’s company lost four clients, and many employees quit. With no new business coming in, she had to lay off others. “I was plowing my own money into the business to keep the lights on, but the bank was telling me it was a lost cause,” writes Dickinson, who has a reported net worth of $80 million, which she will neither confirm nor deny.

As she lay in bed, paralyzed by grief and fear and guilt and shame, Dickinson describes rewinding the tape of her life to the last time she was in similar depths of despair.

Almost three decades earlier, when she was a young mother, she had an affair that ended her marriage and was excommunicated from the Mormon Church. With a high-school education and no job, a family court judge told Dickinson she would lose custody of her children if she couldn’t provide for them.

She remembers crying her eyes out on her father’s couch, blaming everyone and everything for her misfortune, until he gently suggested she was the only one who could fix the mess. Dickinson went out and found a job in advertising sales, and that first reinvention from stay-at-home mom to working woman led to an offer to be a partner in Venture Communications in 1988. Ten years later, she bought out her partners.

After the Calgary flood, it dawned on Dickinson that, once again, she had to take responsibility for some poor decisions. She writes that something in her “balked” at shuttering the company she worked so hard to build from a local upstart into one of the country’s largest independent marketing agencies with offices in Calgary and Toronto. It was the reason she was chosen for Dragons’ Den, the CBC reality TV show where early-stage entrepreneurs pitch investors for money to scale up, which allowed her to diversify her businesses and investments. In a flash, six words came to her: “We need to reinvent the company.”

Dickinson realized she had taken its success for granted. Venture was not at the top of its game, and younger boutique agencies were upstaging it. It was time to take stock, to examine the past to map out the future, something Venture did to help clients rebrand all the time.

In the process, the Dragons’ Den star decided that, although Venture was no longer her main source of income, its success was central to her self-worth, and it was “really where my heart and soul resided.”

“From the ashes of the flood and everything else I was going through, it gave me a new purpose and a new goal,” Dickinson explains in a recent telephone interview from Calgary, where her four children, aged 36 to 42, and five grandchildren live. All of them have worked in the business at some point; right now, her youngest daughter runs the website while her eldest oversees marketing for her three-year-old venture capital fund.

Although Reinvention is aimed at business owners, Dickinson says it works for anyone in a rut. It’s about using self-awareness to figure out your skills — what she calls “the secret sauce” — and clarifying your core purpose. The final steps require understanding the market and your currency in it, creating a strategy to reach your goals and finally “saying it loud,” or communicating it to the world. In 2014, Dickinson chaired the federal government’s Expert Panel on Championing and Mentorship for Women Entrepreneurs, listening to 400 women and men talk about roadblocks to starting and growing businesses in Canada. It produced seven recommendations on how to increase access to capital, mentor women and help them network and create policies to help small businesses compete. Then nothing happened.

After eight seasons, she left Dragons’ Den in 2015, saying she had some “big dreams, ones I want and need to chase.”

Dickinson then launched District Ventures, a business accelerator designed to help early-stage companies in the food and health sectors. By 2018, it had nurtured more than 75 companies with a combined revenue of $65 million.

She didn’t stop there. When Prime Minister Justin Trudeau announced the Canada-United States Council for Advancement of Women Entrepreneurs and Business Lead-ers after his first meeting with U.S. President Donald Trump in February 2017, Dickinson criticized the expert panel as “a disappointing waste of time” in an essay for Maclean’s magazine. “It’s hard to see money continually spent on ‘talk shops’ instead of providing value and immediate support for start-ups and scale-ups,” she wrote.

So in May 2017, she started District Ventures Capital, a fund now worth $70 million. Her “one-stop entrepreneurial ecosystem” includes the fund, the business accelerator and a new technology innovation hub, as well as Venture Communications. As part of its reinvention, the marketing agency’s focus shifted to embrace entrepreneurs and related businesses, and it hosts an online platform to connect business owners called youinc.com.

She also re-joined Dragons’ Den in 2017 because, as she writes in the book, “at this point the show would be an exclamation point, not the main event,” not to mention that it’s good publicity for the fund.

The fund was born of Dickinson’s reinvention homework — what she calls “hunting for seeds” in the book — when she realized she was deeply interested in the food sector, thrived in the face of challenge and needed to do something unconventional to feel energized and engaged. In Canada, where Dickinson has noted female business owners attract just four per cent of venture capital and few funds are run by women, she decided her core purpose was to mentor entrepreneurs and help launch companies. “To get funded,” she wrote in a March 2019 Globe and Mail article, “you should need a killer idea and a bulletproof plan. You shouldn’t need to be a man.”

To her, reinvention isn’t about changing who you are but rather how you do things, methodically and informed by logic.  “I don’t think it’s about bettering yourself as much as it is being true to yourself,” she explains. “It’s more about unsticking yourself from a place that isn’t making you happy.”

As a “pragmatic optimist,” she says her “iron will” and ability to compartmentalize challenges allowed her to change her narrative.

In the book, Dickinson addresses the excuses we use to put off change, including fear of failure, lack of confidence and, of course, age.

She was 57 when she decided to reinvent Venture and 58 when she started District Ventures.

“I never thought I shouldn’t do it because I was too old,” she says. “I just thought, ‘No, this needs to be done.’ I had the energy to do it and I wanted to do it. So why wouldn’t I do it?” The older you get, the more urgent reinvention becomes because, well, time is not on your side.  “When you get to be in your 50s and 60s, you realize you don’t have half your life left, so to live
the last of your days — whether that’s 20 years or 30 years — feeling stuck, I think that’s a horrible place to have to be.”

As a boss, she has a lot of empathy for millennials, who were raised to be overachievers but live in uncertain times. As a result, they feel like failures if they “haven’t solved world peace and created a charity and raised a million dollars and got a Harvard degree by the time they’re 20,” she says. They want to climb the career ladder fast not because they are arrogant, but because “they have this overarching pressure to be something big, quickly.” They are not loyal because they are always looking for the next job that will lead to the next accomplishment.

“I think there’s a lot of floundering as a result of that and a lot
of angst,” she says.

Now 63, Dickinson talks a lot about legacy, about leaving the world a better place when she exits this vale of tears. In the book, she urges readers to think about their eulogy, not their resume. What would hers say? “I hope my eulogy is that I love my life.”

For that reason, she can’t imagine retiring. Ever.  “I’ll work till probably the day I die,” she says. “I like it. I find it keeps me active, it keeps me thinking.” She has, however, slowed down, cutting back on air travel and taking control of her health.

She is now an avowed Peloton addict, riding the internet-enabled bike five days a week and virtually high-fiving her riding partner, who lives in the U.S. She’s down 25 pounds, peeling off the weight she gained post-flood, when the stress eater found comfort in food.

Her goal is to grow the venture capital fund to $1 billion in the next 10 years. This spring, Dickinson plans to launch a solo version of The Business of Life podcast, an intimate weekly chat with singer-songwriter Jann Arden that ended in August because it was too hard to get together in the same city at the same time.

Dickinson has always been frank and used a mix of personal anecdotes to illustrate business principles in her two previous books, 2011’s Persuasion and 2013’s All In.

Still, she believes a memoir is in the cards. She has no qualms about examining the details of her life, like her “garden-variety dysfunctional family,” or her two failed marriages and one broken engagement.

Reviewing the past was a painful, yet necessary, part of her reinvention. It has already made her happier, mellower and more confident, which she thinks makes her a better boss, and a better human.

After all, Canada’s top female entrepreneur-turned-venture capitalist-turned-reinventor mapped a new road by looking in the rear-view mirror.

A version of this article appeared in the March/April 2020 issue with the headline, “Nothing Ventured, Nothing Gained,” p. 64.

Second Act Success Stories: Back to School… And Not Just for Kids!