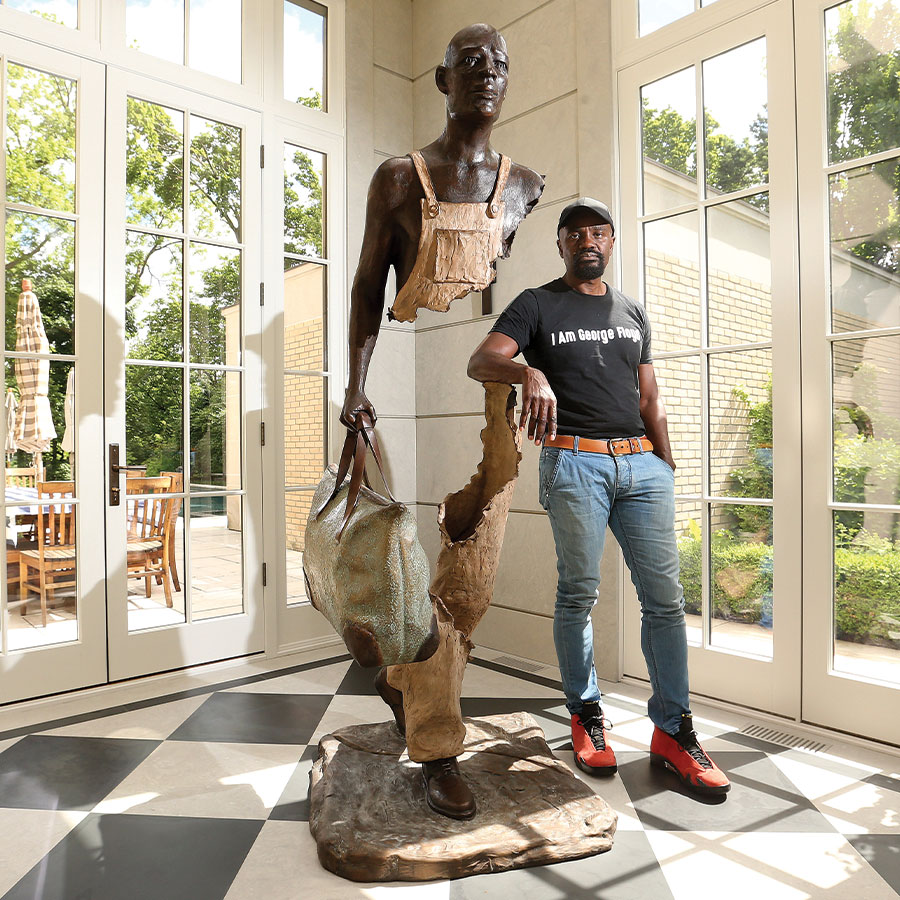 Wes Hall, seen above wearing an "I am George Floyd" t-shirt, launched the BlackNorth Pledge in response to the killing of George Floyd in 2020. A year later, the initiative, which saw 205 corporations promise to boost diversity in their leadership positions, has produced little change. Photo: Steve Russell/Toronto Star/Getty Images

One year after pledging to diversify positions of leadership, the number of Black executives, managers and board members at companies like Rogers and Air Canada hasn’t changed.

A recent survey reported that only a few of the 205 firms that signed the BlackNorth Initiative actually diversified: they stayed with the Old Boys Club. Fundamentally, their idea of reform is not about changing the business system.

BlackNorth was started by Bay Street businessman Wes Hall in the wake of 2020 Black Lives Matter protests after the murder of George Floyd in the United States. Aimed at increasing the number of Black people in positions of leadership at major companies, the initiative calls on companies to upend “corporate structures that uphold anti-Black systemic racism against Black Canadians” by “boosting diversity” in positions of leadership.

Being told to boost diversity usually results in tokenistic gestures, but no transformation. What’s clear is that business elites really just want to make minor tweaks to their current models of operation.

The business world is hostile to Black and racialized people, especially the poor. This history of capitalism is rooted in slavery, and only rewards a few. Joel Bakan, a law professor at the University of British Columbia, has pointed out the greed of corporations, yet we’ve crafted a singular economic system based on the corporate model.

That’s why there’s an urgent need for greater support for what’s known as the third sector (we call it the social and solidarity economy, or SSE), which comprises non-governmental, non-profit and values-driven organizations that are autonomous from the state and private sectors. It’s the one place where people excluded from market-driven and government organizations have historically found refuge.

The SSE does not adhere to the growth thesis. Instead, it defies rational choice theory by focusing on politicized co-operation, not profit, to advance the livelihoods of people and the planet.

Through the Social Innovations project funded by the province of Ontario, we’ve interviewed more than 70 Black and racialized Canadian leaders in the SSE across the Greater Toronto Area and London, Ont. These SSE institutions are not only delivering food, education and employment programs, but they’re hiring executives and board members who are reflective of Canadian society.

FoodShare is a food justice organization that aims to end food deserts and contracts racialized farmers. Paul Taylor, FoodShare’s executive director, told us: “Design and the invention of activities work very nicely for white folks, but they’re not working for us in the same way, because we’re not at the table of solution-finding.” So during the pandemic, FoodShare introduced the “Dismantling White Supremacy Good Food Box” that featured fresh foods from Black and immigrant farmers.

FreedomSchool-Toronto delivers youth programming. Co-founder LeRoi Newbold notes that: “Black people are the innovators of change” because the state has negated this role. FreedomSchool-Toronto teaches histories of resistance, disabilities justice, intersectionality, spirituality and land-based learning for all Canadians.

These examples are highly successful, and we could go on. They are run by Black leaders who have been thinking about equity and undoing structural racism for decades; these leaders should be the ones educating Canada’s major corporations. They are trained technical experts who run businesses with a commitment to creating diverse co-operative economies.

Mainstream firms that abide by a shareholder model are concerned about preserving the status quo, and often this means they prefer to look for highly visible actions — like signing the BlackNorth pledge — rather than ones that actually fuel real change.

And though the BlackNorth initiative is well-intentioned, the business-first mindset fails to critically regard how many people are alienated by the hiring and personnel decisions of corporations. And to believe that a capitalist firm would value the labour of Black people is misguided.

Alternative businesses, on the other hand — like co-operatives, credit unions and rotating savings and credit associations, or ROSCAs — are not composed of people subservient to financiers, but rather leaders who want to build anew. The state should help those leaders by giving incentives to institutions that prioritize commoning, (a general concept describing durable, dynamic sets of social relationships for managing resources), informal co-ops and other solidarity institutions.

It’s time, for example, to bring on the disruptive feminist leaders who can move development from “fixing” to actually changing mindsets so that localized economies are valued. Community leaders can also assist in this project of making equity possible among business leaders.

Until then, it’s not surprising when big corporations fail to culturally diversify. Business elites are clearly not going to upset the status quo.

Caroline Shenaz Hossein is an Associate Professor of Global Development and Political Science at the University of Toronto and Megan Pearson is a Ph.D. Candidate in Education- Language, Culture and Teaching at York University, Canada