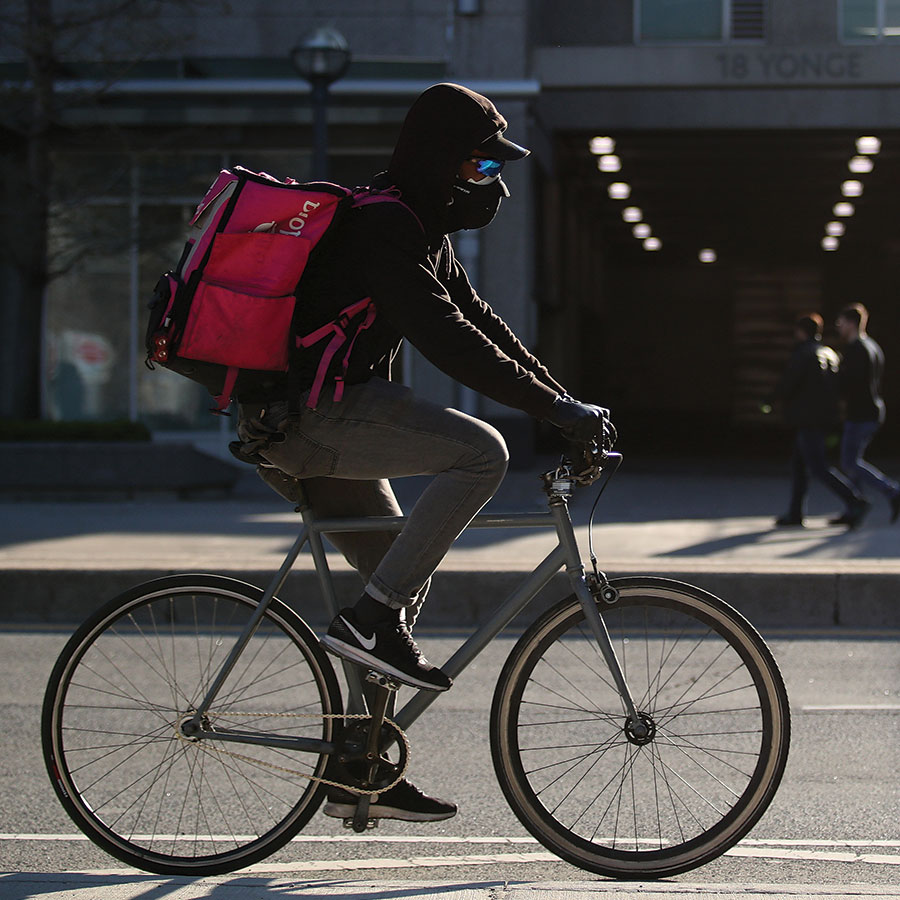 The pandemic has exposed just how vulnerable the precarious workforce — such as food couriers, as pictured above — is to sudden shifts in economic circumstances. Photo: Steve Russell / Toronto Star / Getty Images

The pandemic is the backdrop to the ongoing federal election, and its attendant lockdowns have shone light on health and economic issues. Not the least of these is how job insecurity and low pay are inextricably linked to a wide spectrum of jobs and small businesses.

Unprecedented income support from the federal government temporarily cushioned the unanticipated losses of earnings for these unprotected workers. But the crisis has exposed just how vulnerable a significant portion of the work force can be to sudden shifts in economic circumstances.

Is precarious work an emerging problem that needs to be addressed beyond the pandemic?

The Growth of Precarious Work

Precarious work has already crept into popular discourse and media. American writers ranging from Barbara Ehrenreich to Jessica Bruder have written about the world of low-paying and insecure work in the 21st century.

The dramatic slowdown in economic growth in western Europe during the last quarter of the 20th century focused attention on precarious work that would later spread to North America. Bruder, in particular, documented a modern society of travelling workers living from vans and RVs, moving from job to job without employment security or adequate social supports. Her book, Nomadland: Surviving America in the 21st Century, became an award-winning movie in 2020. The movie’s central characters are forced by financial challenges to eschew traditional housing and stability for a world of unstable, low-paid work that offers no real future.

Precarious work can be defined as “uncertain, unstable and insecure and in which employees bear the risks of work (as opposed to businesses or the government) and receive limited social benefits and statutory protections.” Research for the European Commission found that precarious employment has grown in concert with the growth in social protection measures and labour market regulations in major European countries experiencing high unemployment, like Italy and Spain.

This European research provided reasonably strong evidence that precarious work was becoming an important component of the labour market, with implications for poverty reduction and welfare policy.

While concerns about precarious work were muted by lower unemployment and more robust growth in North America, some attempted to link the concept to the older idea of labour market segmentation. That included the notion that without public employment programs and affirmative action hiring, peripheral workers — women, Black people and other racialized employees — would be relegated to the secondary sectors, job impermanence and bouts of poverty.

That included the notion that peripheral workers — women, Black people and other racialized employees — would be relegated to the secondary sectors, job impermanence and bouts of poverty without public employment programs and affirmative action hiring.

Precarious work was also linked to findings of job polarization and declining employment in the middle of the U.S. skills spectrum and rising inequality among economies in the Organization for Economic Co-operation and Development, known as the OECD.

The research documented that new sources of precarious employment had arisen via franchising, global supply chains, temporary work agencies and remote work. The consequences of these developments were familiar, however: low pay, limited benefits, job insecurity and the concentration of such work among groups like recent immigrants and minorities.

Employment of independent contractors, on-call workers, temporary help agency workers and workers provided by contract firms rose to 17.2 per cent of all employment in the United States in 2015 from 10 per cent in 1995, and comprised all of the job growth between 2005 and 2015.

It’s hardly surprising, then, that American workers are placing more and more emphasis on job security.

Poverty, income inequality and job polarization appear to have followed a somewhat different path in Canada, due to some extent to strong after-tax income gains for the bottom quintile of the income distribution during the first decade of the 21st century. This was associated with redistributive tax measures for low-income Canadians.

This non-traditional employment now makes up a quarter of all jobs in Canada, similar to figures for Europe and the U.S.

Another study of generally low-wage, self-employed freelancers and micro-entrepreneurs with short-term work arrangements found that precarious work had grown to more than seven per cent of the Canadian labour force by 2019.

An analysis of an online survey of participants in the cancelled Ontario Basic Income Project found that precarious workers typically moved on to self-employment or non-employment, rather than permanent full-time jobs.

What Can be Done?

Of these, only income support programs and skills training would be available to all Canadians since federal labour standards are limited to only six per cent of the work force in federally regulated industries. The federal government is a large but not sufficiently dominant employer to exert major influence on human resources decisions of the countless and diverse private and public organizations across the nation.

While current federal income support programs, such as Employment Insurance, could be revised to ease eligibility conditions and improve benefits and training opportunities for low-wage workers, the House standing committee acknowledged that the very nature of precarious employment meant workers would likely still fall through the cracks.

The committee therefore endorsed the study of alternative forms of income support, such as a guaranteed annual income, that are not tied to employment.

As the gig economy and precarious work become more prevalent, there will be a growing need for some form of universal income support to help these workers in ways that traditional income security programs cannot. Hopefully that’s a conversation to be had now, not during future federal election campaigns.