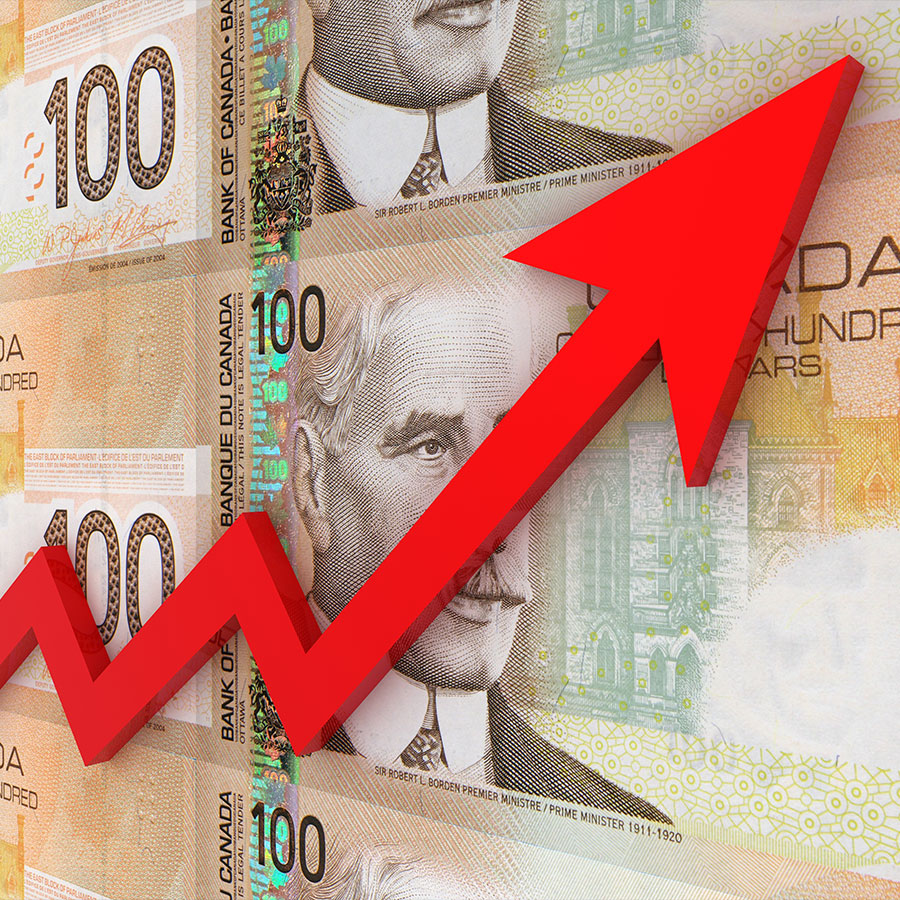 Canada’s year-over-year CPI, which has been rising steadily for months, was up 5.1 per cent in January. Photo: alexsl/Getty Images

What’s the worst thing that can happen to an income investor? A long period of inflation. Unfortunately, that’s what seems to be coming.

Until late last year, the world’s central bankers were united in assuring us that any inflationary spike would be temporary. As the cost-of-living (CPI) index kept climbing, some uncertainty crept into their pronouncements. Now they’re all admitting we face a serious problem and they’re preparing to combat it.

The Bank of England has already raised interest rates twice. The U.S. Federal Reserve Board and the Bank of Canada are poised to announce in March the first of several rate hikes this year.

They have no choice. Canada’s year-over-year CPI was up 5.1 per cent in January. It’s been rising steadily for months. The U.S. number for January was a chilling 7.5 per cent. In hindsight, the central banks should have moved sooner. Now that the genie is out of the bottle, stuffing it back in will not be easy.

Everyone is feeling the impact. Gasoline prices are at their highest level ever, with carbon taxes piled onto rising crude oil prices. Grocery prices are moving higher as supply chain disruptions, exacerbated earlier this month by border blockades, create shortages in some products. New and used cars are selling above sticker price – as are homes in many parts of Canada.

Income investors are particularly vulnerable for two reasons. First, rising inflation will erode the purchasing power of the cash flow they receive from their securities. Second, rising interest rates will tend to drive down the market values of many of their investments, such as bonds, some types of preferred shares, and interest sensitive stocks.

It could be argued that rising rates will mean better returns on interest-paying securities, like GICs. That’s true, but when the CPI is rising faster than the return your GIC pays, you’re still losing ground.

Canadians are well aware of the problem. They just don’t know what to do about it.

According to a survey by Leger conducted for Questrade, four out of five Canadians (84 per cent) say they are worried about inflation, with almost two in five (39 per cent) saying they are very worried.

As you might expect, the primary focus of concern is the increasing cost of food and other everyday items. But 44 per cent of those who are concerned are worried about the impact on their savings/investments.

Although concern is high, very few people (23 per cent) have made any changes to their investments to deal with the inflation problem. The rest (77 per cent) have done nothing or say they don’t know what to do.

“Inflation is on the rise, even more than expected,” said Edward Kholodenko, president and CEO of Questrade. “Our recent survey clearly shows that Canadians are worried about the growing cost of living, lowered purchasing power, and the impact on their investments. Now more than ever, we have to keep on top of our finances, reduce costs, make adjustments where necessary, and continue to invest for our future. Someone with investments or a plan is less likely to be worried and will be better prepared.”

Ironically, the Leger poll found that of those who had made some change to their investment strategy, 24 per cent are contributing less to their RRSP. Almost as many, 22 per cent, plan to contribute more. The specific investments people named as choices for fighting inflation included dividend stocks, cryptocurrencies, gold, and real return bonds. Let’s look at each.

Cryptocurrencies, like Bitcoin, have never been tested in an inflationary environment and are too volatile for most income investors. Bitcoin finished 2021 at $58,533.66. It closed on Feb. 11 at $53,931.60, down 7.9 per cent year-to-date. In early November, it was in the $85,000 range. There’s nothing here to suggest it will be a useful counter to inflation.

Gold has long been considered a safe haven in inflationary times. Not so much this time around. The price is about the same today as it was a year ago.

Real return bonds are protected against inflation both in terms of principal and interest payments. It sounds like an ideal solution, but it’s not. The FTSE Russell Real Return Bond Index was down 8.45 per cent year-to-date as of Feb. 11. The iShares Canadian Real Return Bond Index ETF (TSX: XRB) was down 9.54 per cent. Why? Real Return Bonds are long-term issues. Almost 70 per cent of the issues in XRB have maturities of 10 years or more. The effective duration is just under 15 years, and the portfolio has a real yield of 0.34 per cent. That’s not an appealing combination for investors.

Ordinary bonds are no better. As rates rises, their prices will fall. Unless there is a dramatic U-turn, bond holders are looking at losses this year.

Dividend stocks is the only category named by poll respondents that offers good inflation-fighting potential. But even here, you must be careful. Look for stocks with a proven history of annual dividend increases, preferably in excess of the inflation rate.

One example is BCE Inc. The company just announced a dividend increase of 5.1 per cent, which is above the Canadian inflation rate. BCE has raised its dividend by 5 per cent or more every year for more than a decade. So, don’t just look at the current yield. Look at the dividend growth history.

One more tip:  Rate reset preferreds tend to perform well in a rising interest rate environment, especially those with a relatively close maturity date. One example is Royal Bank Non-Cumulative, 5-Year Rate Reset Preferred Shares Series BO (TSX: RY.PR.S). It was recommended in my Income Investor newsletter in August 2020 at $18.87. The preferred pays a quarterly dividend of $0.30 ($1.20 per year), which gave a yield of 6.4 per cent at the time. The stock closed on Feb. 11 at $24.98 for a capital gain of 32.4 per cent. With the price gain, the yield has dropped to 4.8 per cent for new buyers. But if you bought at the time of the recommendation, you’re still getting 6.4 per cent on your original investment plus you’re sitting on a handsome capital gain.

Rate reset preferreds can be tricky, however, so be sure to discuss them with your broker before buying.

Experts Weigh in on How to Invest for Inflationary Times