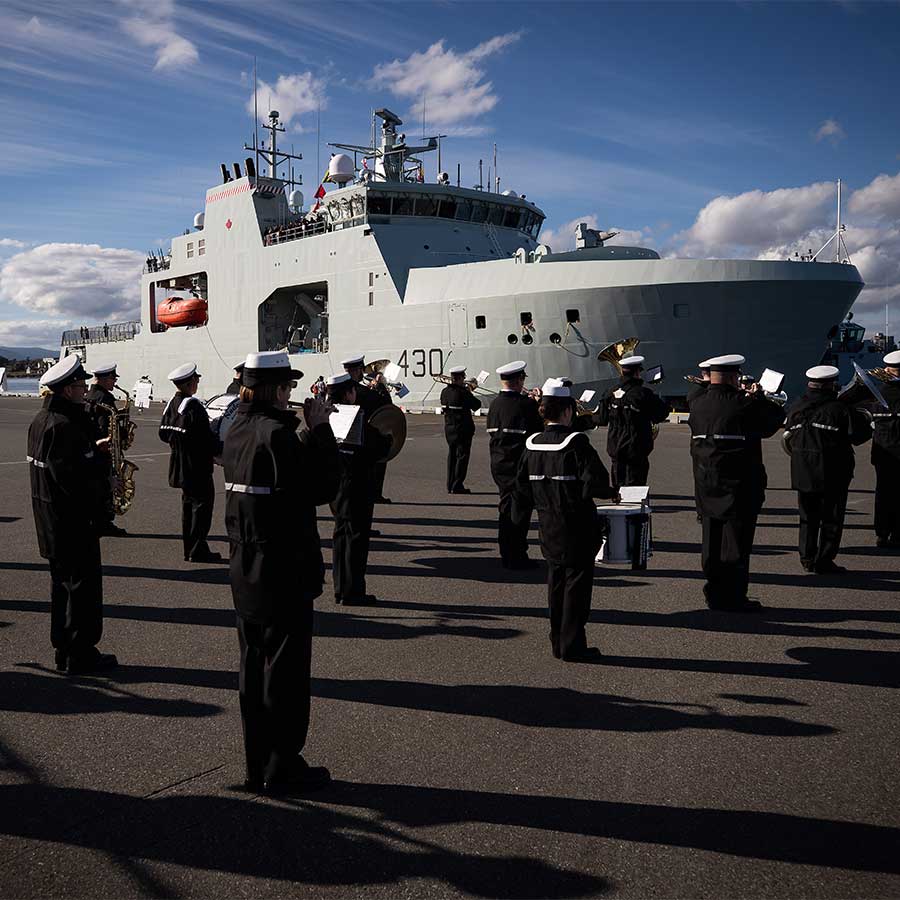 Could Canada protect itself if it was invaded by a superpower? The war in Ukraine underscores how important it is to beef up our military. Photo: Darryl Dyck/The Canadian Press

The Liberals have ignored the historic opportunity the war in Ukraine is presenting Canadian Defence Minister Anita Anand to revitalize Canada’s military.

Beefing up the Canadian Armed Forces has supposedly been a government priority since Paul Martin’s government in the early 2000s. After a decade of Conservative under-spending, Prime Minister Justin Trudeau’s Liberal government promised $164 billion over 20 years to finance the Armed Forces’ nearly 350 various projects.

Parliamentary Budget Officer Yves Giroux, however, recently estimated that more money is needed annually to meet this capital expenditure target above the $24.3 billion currently being spent each year.

Given the war in eastern Europe, defence and security are taking on a new urgency.

The joint support ships needed to sustain those warships are expected to cost another $4.1 billion, and the aging Victoria-class submarines will also need to be replaced. There’s also the cost of the Royal Canadian Air Force’s F-35 fighters, estimated at between $15 billion and $20 billion for 88 jets.

The Army, with generally lower-cost capital expenses, has forces deployed in support of NATO in the Baltics and has been training Ukrainian armed forces. But its stockpiles of weapons and equipment have been depleted by transfers to the Ukrainian army.

Furthermore, the services are reportedly undermanned by nearly 7,500 service members.

While consistently under-funding the military, the Liberals have been fixated on internal issues such as the crackdown on sexual misconduct in the Armed Forces, increasing the recruitment of women and cosmetic changes such as introducing a new dress code.

Time Is of The Essence

Even Anand, the former procurement minister, has stated in the wake of the Russian invasion that the Canadian government must move quickly to build up the military.

The recent Liberal-NDP coalition agreement supposedly included plans for “aggressive options” to improve defence spending, but the $8 billion promised by the Liberals was underwhelming in this regard.

The Conservatives aren’t likely to make any difference. Stephen Harper’s Conservatives, in power from 2006 to 2015, prioritized national sovereignty as a defence goal, but this was at the expense of delivering on Canada’s collective defence commitments.

The Navy, for its part, has emphasized these commitments, as has the Air Force. Concerns about “fifth-generation” aircraft, capable of fulfilling both NATO and NORAD requirements, however, clash with current public perceptions that procuring new fighters represents a militarist mentality.

Canada, however, cannot meet its international commitments, including humanitarian and peacekeeping missions, without new equipment.

Why have Canadian governments so significantly disregarded defence spending for so long? The blame must be shared between the proponents of the national sovereignty focus and the industrial benefits system built into Canada’s procurement process. The policy requires companies awarded defence procurement contracts to undertake business activities in Canada equal to the value of the contract.

The F-35s, for example, on which $613 million has been directly spent since 1997, have generated more than $2 billion in various contracts for Canadian firms despite the fact that no fighters have yet been delivered.

Furthermore, Canada has already sunk $2 billion into the enormous Canadian Surface Combatant project, again, without delivering a single warship. And so far, the Royal Canadian Navy has received only two of the eight Arctic and Offshore Patrol Ships it ordered, with two others intended for the Coast Guard — now reported to cost $1.5 billion for two ships, inexplicably double the cost of the Navy’s own patrol ships.

Industrial benefits stemming from the patrol ships program are expected to reach $3.1 billion. Additionally, the Coast Guard’s new heavy icebreakers are expected to cost $7.25 billion for two ships, whereas the original cost was $1.3 billion for one ship.

The alternative to this incessant defence overspending and under-delivering is buying platforms “off the shelf” and modifying them for Canadian use.

The Canadian government hasn’t always rejected this approach. The MV Asterix supply ship is a notable example: the German-built container ship was converted on schedule at the Davie shipyard in Québec between 2015 and 2017, and has since operated on budget.

Modified off-the-shelf purchases have also been used by the Air Force, as was the case with the C-17 and C-130J transport aircraft.

Interestingly, in 2017, the Fincentari-Naval Group, an Italian-French consortium, offered to build 15 frigates based on its export-oriented warship design for no more than $30 billion to fulfil the Canadian Surface Combatant program’s requirements. Three of the ships were to be built in Europe.

The deal was rejected by the Liberals on the grounds that it was outside the parameters of the bidding process, meaning it wouldn’t meet the industrial benefits requirements.

Given the urgent need to rejuvenate Canada’s role as an international partner in the collective security system in the aftermath of the Ukraine war, continuing to dream of Canadian defence self-sufficiency through industrial benefits is a fantasy.

That’s clearly demonstrated by the inability of both Liberal and Conservative governments to appropriately fund defence and revitalize Canada’s crumbling military.