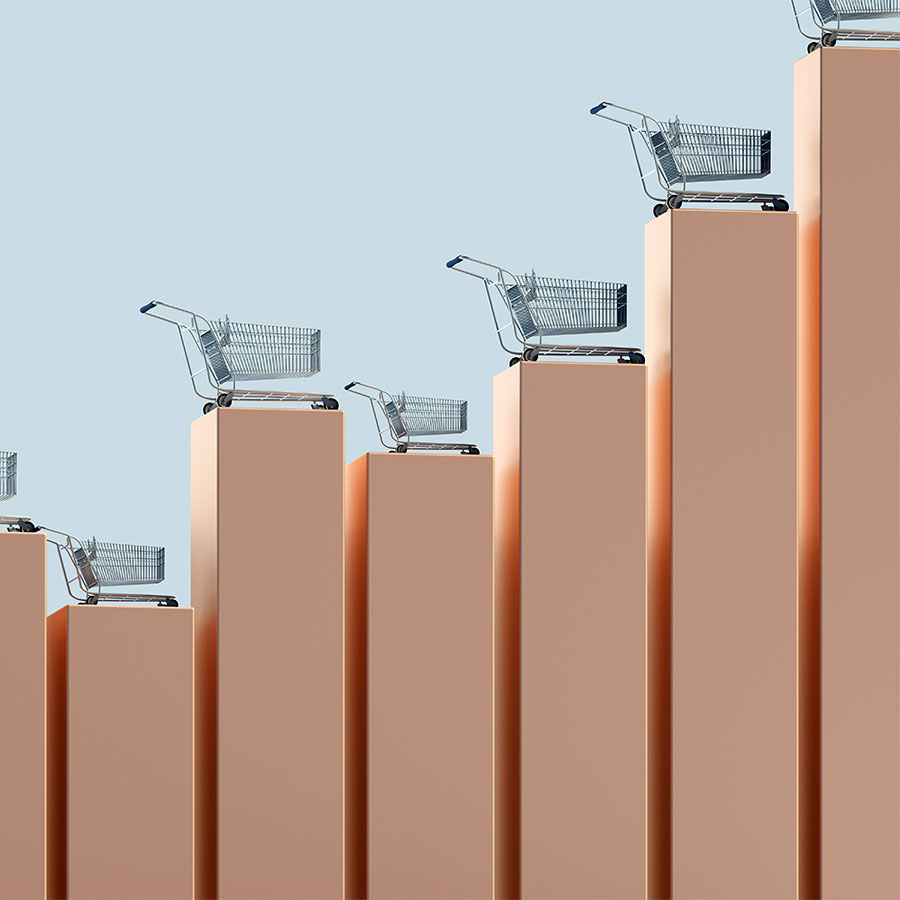 Food prices are still on the rise despite Canadian grocers making $1.5 billion in the first two quarters of 2022, which is almost twice as much as they made in 2019. Photo: Andriy Onufriyenko/Getty Images

Greedflation is the word of the moment. How big a thing is it, and how should we deal with it?

Inflation has been pinching everyone’s nerves since spring, and nowhere is the pain more acute than at the grocery checkout. The headline number for the Consumer Price Index fell marginally from seven per cent to 6.9 per cent in September, but food prices rocketed by 11.7 per cent, the fastest rise in four decades.

Dietary basics are escalating fastest, hurting those on low and fixed incomes the most: Bread costs 17 per cent more than last year; cooking oil, 20 per cent more; and pasta, 30 per cent more.

Yet a mid-October announcement from Loblaw Companies Ltd. (which operates No Frills, Zehrs, Real Canadian Superstore and Loblaws) — that it was freezing prices on 1,500 No Name products until the end of the year — was roundly panned. That’s because prices had already risen dramatically on many products; public trust never returned after the bread price-fixing scandal and there are no price caps on anything else Loblaw sells.

Most importantly, price caps don’t cap profits, which are up at Loblaw, Metro and Sobeys, the grocery conglomerates that account for 60 per cent of grocery sales. (Walmart and Costco bring the share of the big players to 75 per cent of the Canadian market.) In a sector where the largest companies are gobbling up smaller competitors at an alarming pace, grocers made $1.5 billion in the first two quarters of 2022, almost twice as much as the $800 million they made in 2019.

The court of public opinion has entered the charge of greedflation — in other words, excessive profits made by companies riding the big wave of inflation. Guilty, or not guilty?

After weeks of debate in Parliament, the New Democratic Party pushed the federal government in late October to task the Competition Bureau with finding the answer. The bureau’s mandate is to “advocate for and protect consumers” and “ensure that business continues to prosper in a competitive and innovative marketplace.” The Competition Act goes further, saying the law’s purpose is “to provide consumers with competitive prices and product choices.”

The bureau will investigate how competition affects food prices, but the law does not give it the power to force companies to disclose data on how prices are set. Jennifer Quaid, an associate law professor at the University of Ottawa, told me: “Without being able to compel information, the data gathered is uneven or even impossible to obtain.”

The process is unlikely to decouple alleged greedflation from legitimate price increases across thousands of products. How much of a product’s price increase stems from rising commodity prices (such as flour); fuel costs (for production and transportation); labour costs (for farming, manufacturing, transporting, warehousing, stocking and monitoring inventory); or real estate and utilities costs?

Factor in droughts, floods, fires and hurricanes that slash crop yields. Russia’s invasion of Ukraine has also reduced global supplies. The region produces 30 per cent of the world’s wheat exports, and an outsized share of exported commodities like corn, fertilizer, oil and gas. Less supply means higher prices if people don’t cut down on what they eat.

Profit margins at grocery conglomerates also depend on the mix of what we buy. During the pandemic, Canadians bought more fresh and frozen prepared foods, categories with higher markups. We’re eating out less, and spending more on groceries. More sales mean more profits, even if profit margins don’t increase.

If it’s sounding impossible to decipher how much greedflation there is without grocery chains literally telling us, that’s because it is.

So why not short-circuit the problem by taxing excess profits, the way Europe is approaching soaring energy prices? Our governments could capture a portion of windfall profits during these extraordinary times from all companies, not just energy companies or grocery conglomerates, by:

– Identifying the threshold that captures the big players (say, $1 billion in net income)

– Defining excess profit (say, 20 per cent higher than the average of the past four years)

Then they could recycle those funds by helping the non-profit sector deal with record-high demand for food banks and shelter, and ensuring that affordable housing builds don’t get stalled by spiking borrowing costs.  In short, help those struggling to choose between heating or eating, or even between food or shelter, rather than passing on the windfall as dividends for shareholders.

Yes, some retirement incomes depend on those dividends. But last year, six million people struggled with food insecurity in Canada, even before food prices soared. Some of the most vulnerable are seniors on a fixed income who have no stocks or bonds to pay dividends.

The next few months will be extraordinarily difficult. They could be made easier by diverting windfall profits to help those hardest hit by rising food costs.

Timely, targeted, temporary programs that help generate funds from windfall gains and use them for the most vulnerable are not only possible, they are imperative.

Armine Yalnizyan is an economist and the Atkinson Fellow on the Future of Workers. You can read her business columns at the Toronto Star and follow her on Twitter @ArmineYalnizyan.

A version of this article appeared in the Dec/Jan 2022/23 issue with the headline “Greedflation, Aisle Four,” pg. 36