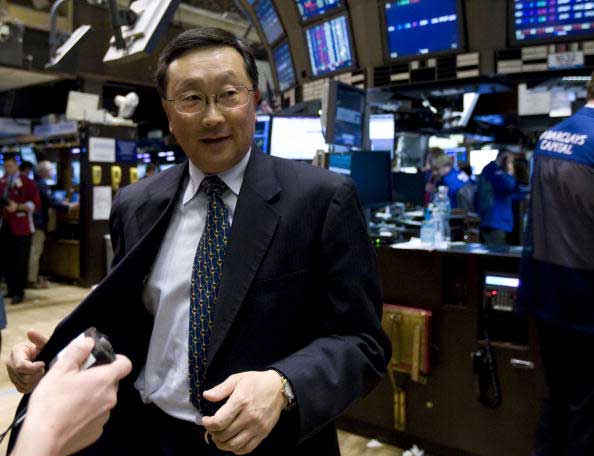 John Chen, BlackBerry's chief executive officer, prepares for an interview from the floor of the New York Stock Exchange in New York, U.S., on Thursday, May 20, 2010. Photographer: Jin Lee/Bloomberg via Getty Images

What lessons can investors learn from BlackBerry’s implosion?

The sad saga of BlackBerry provides a cautionary tale for all investors, especially those with money in leading-edge high tech stocks.

The message is simple – either stay ahead of the curve or fail. Complacency and inertia are the parents of deterioration and demise.

We’ve seen this movie many times before. I remember when Atari was the dominant computer games company and my then teenagers insisted on buying everything that came out. And where is Atari now? Just another of the many casualties of the technology revolution.

They’re not alone. Names like Commodore, Netscape, Napster, Control Data, and Nortel have disappeared while others, such as Nokia, are on the brink. Trail-blazing products like the Sony Walkman vanished because they didn’t evolve to meet the competition from Apple.

BlackBerry is just the latest in a long list of high tech casualties. There will be more – maybe even Twitter someday despite the hype surrounding this week’s overpriced initial public offering.

There will be millions of words written about BlackBerry’s rapid descent to oblivion but the bottom line is that the company allowed the world to pass it by. Management convinced itself that the corporate niche that it had carved out was a secure cash cow and that it didn’t need to expand from there to the risky world of consumer products. By the time the enormous error of this philosophy became apparent, it was too late to recover. The company’s scrambles to capture consumer market share from Apple, Samsung, etc. bordered on the pathetic.

New CEO John Chen may have a reputation as a miracle worker but even he is unlikely to be able to salvage much from this mess. BlackBerry’s glory days are gone forever and now the scavengers will pick at the carcass for whatever morsels they can find. Pity!

So what does this tell us about investing in high tech stocks? Several important things.

An industry in its infancy. This is a very young industry. Most of the companies have been around for less than a generation. Apple and Google, the two current corporate giants, have only been in existence since 1976 and 1998 respectively. The notable exception is IBM, which traces its history back to 1911 when it was founded as the Computing Tabulating Recording Company (yes, computing was part of the language way back then although few people had any idea what it meant).

Young industries spawn hundreds of start-ups in what might be compared to a modern-day gold rush. Only a few will strike it rich but those that do will amass fortunes far beyond most people’s imaginations. Investors, especially those looking for fast profits, hook on for the ride.

As we first saw in the crash of 2000-2002, the inevitable shake-out can be disastrous. Only the fittest survive and even they are left bloodied. The current situation is starting to look eerily similar to the boom times in 1999 that preceded the collapse, with the Nasdaq Internet Index up 58% in the latest 12-month period.

Companies have a relatively short lifespan. We really have no sense of the long-term durability of high tech companies. But based on what we have seen to date, most have a shelf life of 20 years or so. Eventually they reach a stage where they run out of steam and fall prey to more aggressive up-and-coming rivals. The problem is there’s no predicting in advance when that will happen – there’s no best-before date stamp on a company’s website. That’s why I generally advise avoiding IPOs, especially those such as Twitter where overwhelming investor interest prompted the underwriters to push up what was already seen as an overly aggressive price.

Share prices can turn on a dime. Once a tech stock goes on a roll, the sky’s the limit. Trivial concerns like p/e ratios mean nothing; investors are more interested in the number of eyeballs being added, or wireless market share, or rapid revenue growth. But let there be one whiff of trouble and the stock can plummet. Groupon shares, for example, fell from $26 to $3 in the space of a year.

The moral of this story is that if your tech stock goes on a run, it’s prudent to periodically sell some shares to crystallize your profits and reduce your downside risk.

Constant innovation is the key to success. The companies that are always at least one step ahead are the ones that are most likely to survive, even it means reinventing themselves as they go. When Steve Jobs was alive, Apple was the undisputed leader in product development with one launch after another of technology people didn’t even know they wanted. Jobs scorned focus groups because he believed consumers couldn’t express a desire for things they couldn’t imagine. And he was right – a decade ago, how many of us could have even conceived of the idea of the iPad? Apple’s problem today is that despite the great profits many people believe that the company’s innovation phase is over. If so, it could be the next BlackBerry in 10 years.

One of the attractions of Google is that it is constantly seeking to break new ground on a wide range of technological frontiers from driverless cars to Internet glasses. The company is spending hundreds of millions of dollars on these projects, many of which will never come to fruition. But the ones that do will probably pay off big-time, as happened with the Android operating system.

That’s why, out of all the tech stocks, Google looks like the one with the most staying power right now. Yes, its share price is over US$1,000. But that may look cheap in five years.