BlackBerry’s Soaring Stock: A Question Of Buy Or Bye 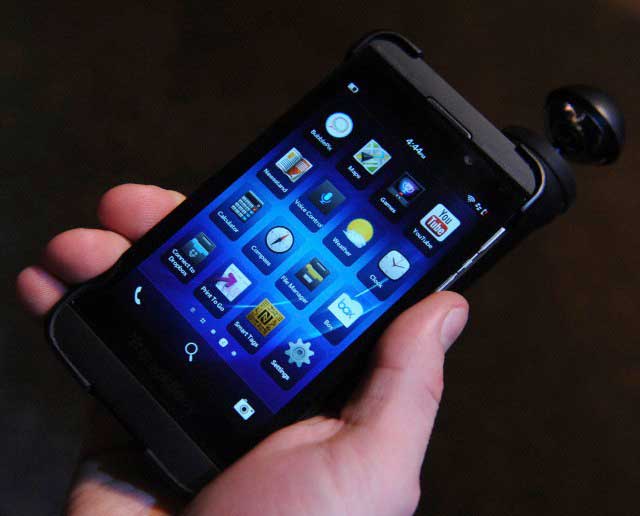 Days after watching BlackBerry launch its “best day ever for the first day of a launch of a new BlackBerry smartphone” and weeks after its shares surged 58 percent in the fourth quarter of 2012 (and another 35 percent this year), a lot of investors are kicking themselves. Not for locking into 3 year iPhone or Android contracts with the likes of Rogers and Telus but for overlooking RIM shares back in September when the smartphone maker’s stock — currently soaring just under $16 — was trading at a gaunt $6.22.

It’s not like there weren’t signs that the smart money was betting on Research In Motion (now simply called BlackBerry): celebrated investor Prem Watsa doubled down on his RIM holdings back in July, noting the company had nearly $2 billion in cash reserves, and zero debt. Quoting legendary investor John Templeton, Watsa dropped a pretty big hint for the rest of us mere mortals, saying “the best investments are made at the point of maximum pessimism,” adding a RIM turnaround would take 3-5 years.

Other factors that make a RIM investment even more obvious in retrospect: its free cash flow, roughly 3,300 US patents worth around $3.3 billion and the fact that the company’s stock six months ago had been trading well beneath its book value.

While the media loves a comeback story, the hype-free question for potential BlackBerry investors remains whither to buy or to let whither (and for sellers, to cash out or stay put). Bulls will argue RIM’s market cap has crawled up to $8.1B after shrinking to $3.5B in July 12. Unfazed bears will recall, however, the current sky bound valuation still pales in comparison to the $81B the company was worth in June 2008  when “crackberry” stock was around $150. As the numbers show, however, if an investor bought BBRY stock yesterday at the closing price of $15.73  and is looking for a decent 10 percent return, she would be be selling at $17.30 — roughly equal to a market cap of $8.9B. Compared to another struggling smartphone maker, Nokia, and its $15B valuation, a 10% market cap increase by BlackBerry seems reasonable. Even at a beefier 25% increase in stock value ($19.6 per share with a $10.1B market cap), BBRY still looks fairly reasonable given the stock would still be trading at only 13 percent of its historical high.

The sales figures are more revealing: BB sales during fiscal 2008 (the year its stock peaked) was $11b in total revenue with $2.8B in before taxes income. Last year, the company generated $18B in total revenue with $1.5B in pre-tax income. Compared to the cataclysmic plummet in share value, those numbers don’t look particularly dramatic. In fact, if anything the drop in share price may be partly a matter of (North American) perception: BlackBerry’s market share in the all-important US market nose-dived between 2008-2012 as the iPhone gobbled market share. Under reported, however, was the fact that the BlackBerry continued to do well overseas, including Europe where sales surged to a third of the company’s total, particularly in the UK where the BlackBerry remains the top selling smartphone. The device also continues to be the top seller in Latin America (35% market share), South Africa (44%) and emerging Southeast Asian countries like the Philippines, Indonesia and Thailand.

If regaining control of public perception is key to greater market share and an attainable $10B (or higher) market cap, BlackBerry is off to a respectable start. Its new Z10 touchscreen model is already selling out in Canada and the UK (partly due to a scarcity strategy that is de rigueur with smartphone companies these days). And clearly a lot of traditional BB users are anxiously awaiting the physical keyboard Q10 model. The buzz comes at a time with Apple losing momentum, the Microsoft’s Windows Phone in free fall, Nokia doing a dead cat bounce  and Samsung in a global patent battle with Apple that included a $1B lopsided defeat last year.

BlackBerry’s image problem may have already rebooted among its most important customers — business enterprise, except for Home Depot. Still, the consumer market will be a far steeper climb, given the sheer dominance of Apple and Android devices.  Within that challenge lies another, arguably tougher crowd to win over: developers. One reason is that smartphone owners are difficult to churn is because many have invested in apps that only run on their devices. With the App Store containing 700,000 apps and Google Play Store surging with 675,000 apps, users can find an iOS or Android app for just about anything imaginable — not just big, horizontal ones like Facebook or Instagram. For app developers with limited capital, Android and iOS are safer bets compared to the unproven BlackBerry operating system, QNX. As Palm showed with their widely acclaimed but ultimately ill-fated WebOS platform, a healthy ecosystem is absolutely critical for gaining share of the consumer market. At 70,000 apps, BlackBerry App World has a long way to go before converting iPhone and Android users anytime soon. Given the challenge that lies up ahead, and the fact the stock took a 12% haircut on the company’s well-hyped launch day (and 3% yesterday on bad Home Depot news), we leave it with the professionals on the question of whether now is the time to buy, sell or hold:

Or you could just wait and see what happens next month when the new BlackBerries are launched in the US.