The Harlem Shake: From Silly To Sales To Serious 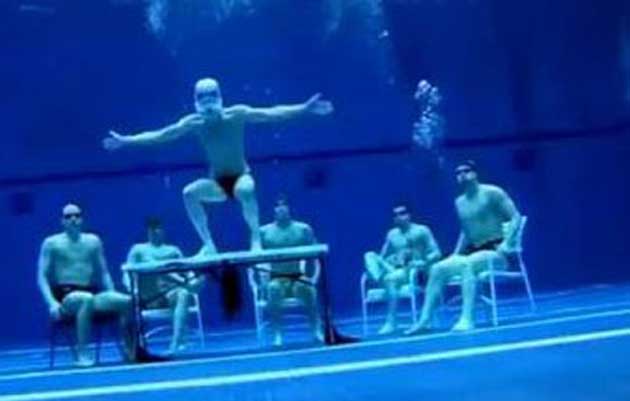 The Harlem Shake has shook the world. If you’re of an analog ilk and haven’t seen the YouTube viral video yet, here’s the idea: a short 30-second video starts off with a sole person dancing (usually wearing a cartoonish mask or helmet) while surrounded by seemingly oblivious bystanders. As the song reaches a pre-chorus apex, the video suddenly cuts to a crowd of frenetic partiers who have joined the dancer in what could be described as colorful chaos set to infectious hip hop beats. After the original version was uploaded to YouTube last month, copycats soon inundated the video sharing site with editions shot at colleges, nursing homes and even underwater as shown above. There are now around 5,000 Harlem Shake variations, clocking 200 million-plus views and propelling the song to the top of the Billboard music charts.

From absurdist (dogs riding bikes) to activist (Kony 2012), viral videos are now a mainstay of pop culture. In this case, The Harlem Shake cleverly truncates a music video cliche with the participatory nature of flash mobs, set to an appealing groove anyone can “dance” to. Requiring no dialogue and consisting of a short format, the video meme is tailor-made for global re-interpretation: Warhol’s 15 minutes of fame twitterized into 30 seconds of form.

As the former executive producer of an experimenetal TV variety series (ZeD) in the early ‘00s, one of our objectives was to blur the lines between television and audience. Episodes were built upon uploads from viewers: short films, animations and MP3s that served as the soundtrack for the latenight cross-platform series. During this pre-YouTube era,  it was intriguing to discover a relatively small population like Canada (34 million total pop) could easily produce enough quality digital content to power a national late night series, five nights a week, 100+ episodes per season.

A decade later, a digital spring has blossomed worldwide. Harlem Shake encapsulates this connected, user-generated culture with its simple but highly effective “call for reaction” format. Early bandwagoneers showed, if uploaded early enough, millions of YouTubers would watch your version. A prime example is the University of Guelph edition, launched just as the proverbial hockey stick started to gain traction. The result: over seven million views and counting. First mover status matters when you’re “surfing the meme.”

For those in the monetization business — either on-air or online — the lesson is clear: virality is bankable if you move fast enough.  As such, Harlem Shake offers a hint to music labels looking to survive in a post-Napster world. While music album sales saw a small but promising uptick in 2012, that growth was entirely due to soaring digital downloads. And obviously the most profitable way to drive such sales is through virality — a tactic that has little or nothing to do with budget.

With the concept of playlist rotation now decentralized and driven by the audience, record companies are better off searching for the next big viral meme for their songs to piggyback rather than spending millions trying to create what’s arbitrary by nature.

Perhaps the biggest surprise from the Harlem Shake phenomenon is its evolution from silly dance to political expression. Music has always been a powerful tool for protest but the notion of a 30 second dance music video fitting this role is new. The craze, however, has done just that: secular Egyptians have taken to producing their own versions of Harlem Shake as a means of ridiculing the ruling Islamist government, the Muslim Brotherhood. Not to be upstaged, Brotherhood member Ahmad al-Mogheer uploaded a retaliatory version where dancers are wearing masks of their main opposition, the National Salvation Front. Tunisia also got into the act, triggering clashes with Muslim and police groups while shooting this version. Underscoring the sobering side of the craze,  15 miners in Australia were sacked after shooting their take on Shake, sparking safety fears while, in the United States, FAA officials are investigating a version shot aboard an aircraft, possibly in flight.

Harlem itself is not amused. As shown in this report from the streets, residents rightly feel the dance craze is, at best, a bastardized mockery of the art form that originated from their famous Manhattan neighborhood in 2001. At its worst, Harlem Shake is seen as yet another  instance of uncompensated appropriation of African-American culture.

Regardless of viewpoint, the multi-faceted success of Harlem Shake has made one thing clear: in the inter-connected global village that Marshal McLuhan predicted, a dance isn’t just a dance; it’s a global tribal expression.

Best Of The Harlem Shake Videos (check out their views)

And, of course, here a zoomer version: