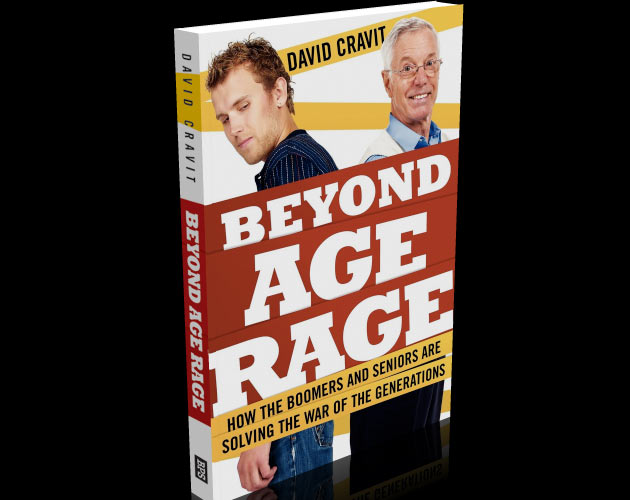 Is generational warfare inevitable? A new book says our differences can be settled peacefully.

Beyond Age Rage: How the Boomers and Seniors Are Solving the War of the Generations Author David Cravit (pictured) surveys the issues that are pitting the older generation versus the young and lays the groundwork for a harmonious solution. A vice-president with Zoomer Media, Cravit’s previous book was The New Old.

WHEN STATISTICS CANADA released its 2011 census figures showing that our population is getting older, it touched off the usual breathless headlines and doom-and-gloom media reports explaining how our aging society is putting our country’s future in peril. Many pundits like to compare our demographic situation to a time bomb, inexorably ticking down to the time when our pension and social programs run out of money, blowing our budget sky-high and leaving nothing but charred remains for future generations.

Because of this, some say, we’re on the verge of generational war, with the younger millennials preparing to clash with Zoomers in a battle over dwindling educational, health-care and pension money. Ticking time bombs and the drumbeats of war – is the situation really that grim?

“There is a tremendous amount of intergenerational rancour flying about,” writes David Cravit in Beyond Age Rage: How the Boomers and Seniors Are Solving the War of the Generations (BPS Books, 2012). “Angry millennials blaming boomers and seniors (but particularly boomers) for having messed things up for them, and grouchy (or outright unsympathetic) boomers and seniors pushing back.”
Any time you read an article on Zoomers delaying retirement, pension shortfalls or tuition hikes, you can sense an inarticulate but simmering resentment from the younger crowd that can basically be summed up as: “Once again, the boomer generation is screwing everyone else.” Cravit, whose first book The New Old: How Boomers Are Changing Everything … Again, understands well the situation: “There isn’t enough money to pay for all the commitments. Scarcity promotes a battle for the spoils; it’s that simple.”

He feels the source of the intergenerational conflict lies in the astounding longevity revolution that’s happening in much of the developed world. Canadians are living longer, healthier lives and remaining engaged in the workforce, politics and culture. Today, he writes, the Zoomer generation is “very aware of its clout” and is unwilling to “surrender its domination.”
In Beyond Age Rage, Cravit identifies the issues that are causing friction between the rival generations and surveys the battleground.

Zoomers, who already represent 57 per cent of the adult population, refuse to die. Thanks to medical and wellness advances, life expectancy keeps increasing. “As a consequence, the demographic dominance in our society now lies with the older age groups.”

JOBS Boomers are responsible for poor employment prospects by not retiring on schedule, which Cravit illustrates is creating immense frustration among younger job seekers. “The 2008 financial wipeout made this trend stronger – and even drew many retired seniors back into the workforce. The result was to put serious barriers in the path of millennials trying to enter the job market for the first time.”

Older Canadians are fighting long and hard to save present health-care and pension entitlements. Millennials, suggests Cravit, want government to increase educational subsidies and relieve student debt. “On this battleground, the millennials face large and well-organized lobby groups – backed by the voting power of the boomers and seniors – that will do everything they can to make sure politicians preserve (or even increase) their hard-won benefits.”

Millennials complain that Zoomers are in the process of leaving behind an enormous debt, which will have to be paid by future generations. For their part, writes Cravit, Zoomers are aware of the crushing debt but “also want to make sure that any necessary cutbacks don’t encroach on their entitlements or their access to needed services.”

The older generation is almost completely in control of the outcome of elections. They represent a larger voting bloc than the millennials and they turn out to vote in much greater numbers. Cravit feels this “creates a powerful commonality of interests between the boomers and the seniors at the expense of the millennials, who certainly don’t have the electoral muscle to protect their own interests.”

In the end, he avoids the notion that all-out war is the only course. As the book’s subtitle suggests, he searches for ways the older and younger generations can work together without conflict and share their time together harmoniously.

“The boomers – let’s face it – are quite capable of making their own strong contribution to age rage. But they’re not stopping there. Even as they are fighting aggressively for their own interests, they are already mounting a rescue operation for the millennials. A Marshall Plan, if you will, one that isn’t waiting until after the surrender ceremony but is quietly (and sometimes not so quietly) being put into place even now.”