BlackBerry Z10 Launches In US — Finally 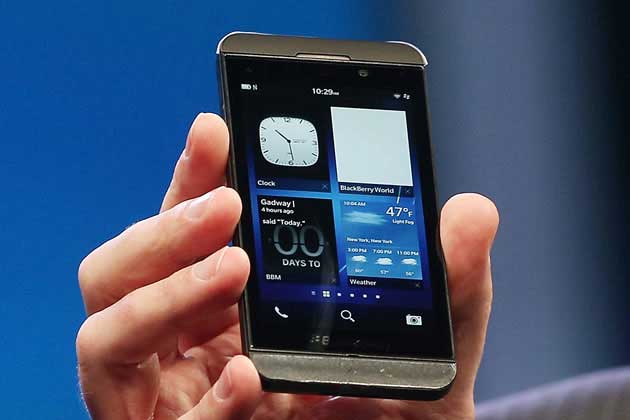 Two buzz-sapping months after the Canadian and UK launch of the new BlackBerry Z10, the company’s Hail Mary pass has finally reached its most important market, the United States. Whether the smartphone maker has got its groove back remains uncertain, however.  On one hand, signs are upbeat: a buoyant stock, CEO Thorsten Heins’ cocky swipe at Apple, and the announcement of one million Z10s ordered by a mysterious buyer certainly foreshadow the swagger of a long-overdue Comeback Kid. And the company just announced its App Store has reached 100,000 apps in time for today’s launch. On the other hand, however, since the launch of its touchscreen Z10 model, the company has lost major customers like Home Depot (to Apple no less), the massive US Department Of Defence and possibly the British Government while its celebrity Global Creative Director Alicia Keys is caught tweeting with an iPhone.

With this week’s US debut, the reviews are in and can be summarized in a word: underwhelming.

“The phone probably deserves to do well, but I’m not convinced that it will be able to overcome the significant headwinds created by its late arrival and the growth of the iPhone and Android ecosystems.”– Larry Magid, Forbes.

“This is a model which is clearly sub-par when you look at what is coming out of Apple, Samsung, HTC and Nokia right now. The only situation in which we can really recommend the Z10 is if you are in a corporation which requires you use a BlackBerry, and honestly, many of those have opened up recently to support the iPhone or a Windows Phone model.” — Renai LeMay, Delimiter.

“..the biggest reason to steer clear of the BlackBerry Z10. Everything may be functional, but nothing feels truly fresh or exciting.” — Adrian Covert, CNN Money

“If BlackBerry had released the brand-new Z10 even just two or three years ago, it might’ve had a fighting chance….but BlackBerry is late to the game, and the game is now only for giants–Apple, Google, and Microsoft. Sorry, buddy. It’s just a little bit too late for you.” Dan Nosowitz, Popular Science

Whether today’s long-overdue stateside launch and this incredibly awkward video give a boost to the struggling company, it may be moot anyway. This week’s report by Gartner notes even if the new Blackberries are well-received, it’ll be 2016 before the company reaches five percent the worldwide smartphone market. Underscoring the crucial nature of today’s US launch:  Blackberry’s stateside share is now 5.9%, down from 50% in 2009.  If company has a fighting chance left, its success may be determined by its keyboard-addicted faithful in April when the Q10 model is launched. Already the reviews are looking good.