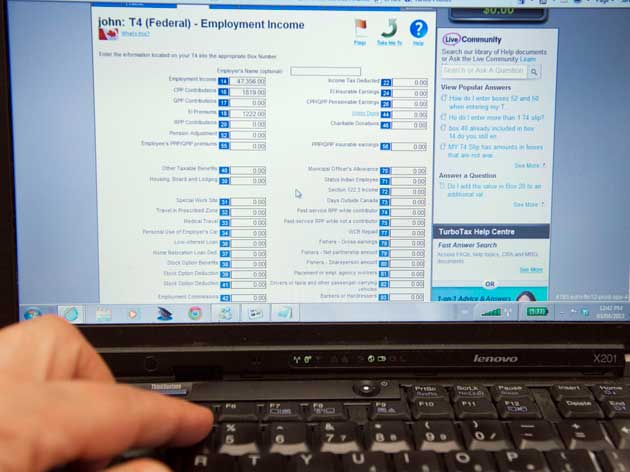 The Canada Revenue Agency wants everyone to file their returns electronically. But sometimes it isn’t that easy.

Now that the tax deadline has passed, I’d like to know whether many people had the same problems I encountered in trying to use Netfile. It’s been a long time since I had such a frustrating day (two of them, actually).

It’s an important issue because the Canada Revenue Agency is aggressively encouraging all of us to file electronically. They don’t even send paper returns any more. If you want to file the old-fashioned way you have to download a return from the CRA site or trek to the nearest post office to pick up a form.

When you go to 2012 Tax Package page on the CRA website, right at the top is an inducement to submit your return electronically. “Filing online is easy and we can help you,” the site proclaims. “Let us walk you through it step by step.”

Good luck with that. I tried filing my return by Netfile several times. On each occasion, my TurboTax Home and Business software told me I had no errors and was eligible for Netfile. Each time, the CRA returned a message stating: “Your tax return has not been accepted. It contains errors that need to be corrected.” That was followed by an attempt to identify the error that made no sense. There was a number – 180003 – followed by a line that read: “The first digit of the message number on the left identifies one of your financial statements.” Really? Which one? The rest of the message was unable to clarify that.

When I called the CRA helpline for the promised step-by-step walkthrough, I was told that the problem was with the TurboTax software and I needed to contact their technical support line. “It’s a known flaw in TurboTax,” the CRA rep said after consulting with her supervisor. She couldn’t help.

There were three problems with the CRA’s advice. First, the error message originated from them, not from TurboTax. Second, the TurboTax technical support centre is in India – I know because I asked. In all, I spoke to three people there. All were male, all had heavy accents, and all spoke extremely quickly. To make matters worse, there was an echo on the line, presumably because of the distance involved. The result was that the advice I received was virtually incomprehensible.

The third problem, which was identified after a lot of shouting into the phone at both ends and repeated pleas from me to speak more slowly, was that TurboTax technical support knew nothing about the “known flaw” described by the CRA. I was asked to submit a page grab of the error message and a file containing my return for analysis. I would get a reply in one to three days. The filing deadline was less than 48 hours away.

I gave up and filed a paper return. I know that’s not what the CRA wants but it was that or more days of frustration. At that point, I had lost all faith that either the CRA or TurboTax could resolve the issue.

If Ottawa wants us all to file electronically, it’s time for the CRA to step up and offer a free, glitch-free software program that anyone can use. As things stand right now, there are 12 approved Windows-based programs listed on the CRA website, 14 online programs, three Mac packages, and two programs for mobile devices. The CRA promotes the fact that some of the programs are free but these are usually for people with low income or very basic returns.

TurboTax by Intuit is the top-selling package in Canada but as my experience shows it has problems even though it is CRA-approved. I did not try any of the other packages (I will next year, believe me!) but I cannot believe they are all error-free.

If you have a Netfile story to tell, I’d like to hear it. Now that the CRA has decided that it wants all Canadians to go this route, the government needs to know if there are major bugs in the current system.

Perhaps mine was an isolated case. Most people I have heard from have had no problems. But if you have a horror story of your own to tell, I’d like to know about it. Send it to [email protected].