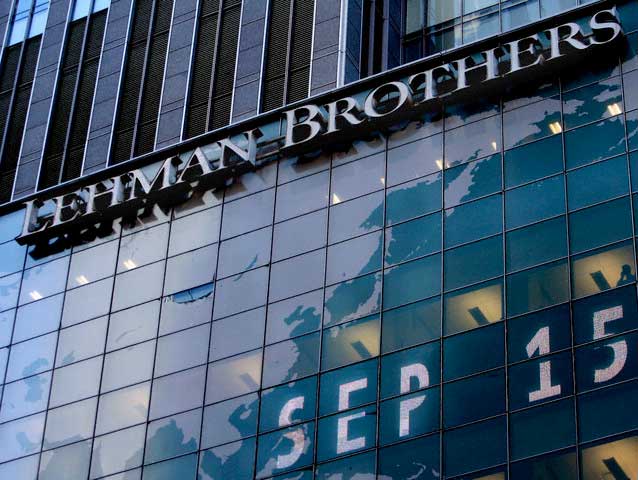 The collapse of Lehman Brothers set off a chain reaction that resulted in the worst financial crisis since the Great Depression. What have we learned?

It was five years ago that Lehman Brothers declared bankruptcy and set off the biggest financial and economic crisis since the Great Depression.

The dramatic announcement came at 1.45 a.m. on Monday, Sept. 15, 2008 after a desperate weekend of negotiations had failed to find a way to save the 158-year-old company.

Books have been written about the failure of Lehman’s, which at the time was the four-largest investment bank in the United States. Many economists have criticised the administration of George W. Bush, who was still in office at the time, for turning a blind eye and not coming to the rescue of the troubled company.

History will judge the degree of Mr. Bush’s culpability for subsequent events but the inescapable fact is that Lehman’s downfall unleashed a domino effect which eventually pushed the world’s financial system to the brink of collapse, cost governments billions in bail-out money, and triggered a global recession from which we are still struggling to recover.

The market crash that resulted traumatized investors around the world, wiping out trillions of dollars in savings and creating psychological scars that remain to this day. Despite the fact the Dow Jones Industrial Average and the S&P 500 have both recovered all the losses incurred in 2008-09, many people remain reluctant to put any money into the stock market, preferring the perceived safety of low-interest bank accounts and GICs instead.

The human suffering inflicted by those events is incalculable. Millions of Americans lost their homes. Unemployment rates soared throughout the Western world, in some countries hitting levels unseen since the 1930s. Austerity programs ruined countless lives in nations such as Greece, which had coasted for years on a combination of tax evasion and handouts from governments that couldn’t afford them. For anyone who hadn’t lived through the Great Depression, it was the worst of times.

Five years on, we have not yet fully recovered. Yes, the financial system has stabilized and economic growth has returned, albeit hesitantly. But huge problems remain, such as the continued escalation in debt levels both public and private. Doomsayers continue to insist that there are more shoes to drop.

So what lessons can we take away from the ordeal of the past five years as they relate to our investment strategy? Here are my thoughts.

Expect the unexpected. Events rarely unfold exactly as predicted but small deviations from the norm usually cause minimal dislocation. It’s the big, out-of-the-blue crises that turn the world upside down – Lehman Brothers, the meltdown at the Fukushima nuclear plant, the 9/11 attacks. We can’t forecast them but our portfolios have to be constructed to handle them. That means always maintaining some cash reserves, despite the low returns, and owning some gold.

Don’t invest in what you don’t understand. Few people outside the professional banking community really understood what bundled mortgages were. All investors were interested in was the high yields and the fact that the big credit agencies had endorsed them with high ratings, in some cases AAA. When the sub-prime market collapsed and the securities suddenly became worthless, people didn’t know what had hit them, or why.

Use common sense. The corollary to not investing in securities you don’t understand is to bring your critical faculties to bear on everything that is suggested to you by a banker or financial adviser. Too often the recommendation is in their best interests, not yours. Ask hard questions about past performance and future prospects, remembering that one does not guarantee the other. Make sure you know exactly what you are buying. Remember the old saying that if something seems too good to be true, it probably is.

Don’t get greedy. The people most seriously affected by the crash were those who had stacked their portfolios with stocks and equity mutual funds to ride the wave of the bull market that took the Dow from below 8,000 in late 2002 to above 14,000 by the early spring of 2008. The TSX fared even better, rising from below 6,000 in 2002 to a record high of about 15,000 in June 2008. This long bull market had the usual effect of drawing in people who understood little about investing but wanted a piece of the action. Even experienced investors sold off their fixed-income securities to add to their equity positions. When the crash came, their portfolios got hammered, losing more than half their value in the most extreme cases. Those who had maintained a more balanced approach through the market frenzy fared much better; subsequent studies showed that the higher the percentage of government bonds in a portfolio, the lower the loss it experienced. Portfolios that were 90% in bonds actually made money.

Markets do recover – but it may take years. As we have repeatedly seen throughout history, stock markets eventually recover from even the worst shocks although it can often take many years. Although the Dow and the S&P 500 climbed all the way back, the TSX is still nowhere near its 2008 high and Nasdaq is about 30% below the peak it reached prior to the tech crash of 2000-02. Overseas, Tokyo’s Nikkei Index is trading at slightly more than one-third of its all-time high of 38,954, reached in late December 1989.

Putting it all together, the lessons from 2008 boil down to this: keep some cash reserves, own some gold, maintain a well-balanced portfolio (don’t be overly concerned about temporary weakness in the bond market), and keep your cool in troubled times.

And let’s hope we don’t see a repeat performance of 2008 in our lifetimes.