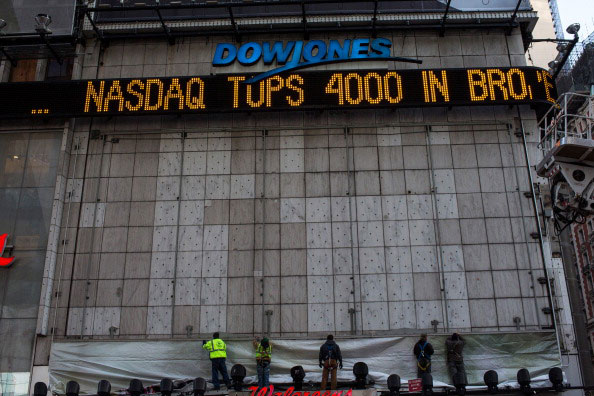 Tech-heavy index crosses 4,000 barrier but is still well short of its all-time high – and that could be a while coming

First it was the Dow and the S&P 500 cracking through important psychological barriers. Then Nasdaq joined the bull market party by closing above the 4,000 level, the first time that has happened since early in the year 2000.

However, there is one important difference compared to the other two big U.S. indexes – in Nasdaq’s case, no new record was set. The tech-heavy index hit its peak of 5,048.62 way back on March 10, 2000 and then nose-dived as the high-tech bubble burst in the dot.com crash. By the time the carnage ended in the fall of 2002, the index had plunged all the way to 1,114.11, for a mind-boggling loss of 88 per cent!

I still remember a woman approaching me after a seminar in February 2000 and asking if she should move all her savings into a Nasdaq-based mutual fund because of the big gains her friends were enjoying. I did my best to talk her out of the idea but I could tell when we parted that she was still determined to go ahead. I have often wondered what happened.

It’s now more than 13 years since Nasdaq reached its historic high and there is still a long way to go before it regains that level. Back then, the index was fuelled by dozens of new Internet companies, most of which had no profits. Some didn’t even have much in the way of revenue – they were concept stocks that were sold on the basis of what seemed like a great idea. Investors didn’t stop to consider how the idea could be monetized; they simply snapped up the shares at the going price.

It was a classic bubble – worthless companies being valued at hundreds of millions of dollars in a frothy stock market that appeared to have nowhere to go but up. That’s a scenario that always ends badly – and it did.

What about this time around? The good news is that the current Nasdaq surge is based on sounder fundamentals than back in the 1990s. For the most part, the companies providing the momentum are sound businesses with proven earnings, although some look rather pricey at current levels.

Also, the composition of the index has changed somewhat from the 1990s. According to The Wall Street Journal, almost two-thirds of the Nasdaq Composite was composed of technology stocks in 1999. That’s now down to 44.8 per cent, including such well-established companies as Apple, Microsoft, Cisco Systems, Adobe Systems, and Yahoo. Consumer stocks make up 16.7 per cent of the index compared to just 5 per cent in 1999. Healthcare issues have gone up from 6.2 per cent to 13.9 per cent, while telecoms have dropped from 15.2 per cent to 7.1 per cent.

The result is slightly better balance, although technology still dominates.

If Nasdaq is going to continue to rise, that means tech stocks must continue to do well. Right now they have momentum, especially those that are Internet-related – the Nasdaq Internet Index (QNET) has gained more than 50 per cent so far in 2013. But many of the 81 companies that comprise this sub-index have had huge runs this year. Examples include Amazon, Netflix, Expedia, Travelocity, Tripadvisor, and Zillow. It’s hard to imagine those performances being repeated in 2014.

That makes me more nervous about the short-term prospects for Nasdaq than for the Dow and the S&P. When the market correction comes, which it will, I expect that Nasdaq will be hit harder than the other two because of its tech stock concentration and the big run-ups many of the Internet stocks have enjoyed.

The bottom line is to be cautious. As I told the lady those many years ago, think twice before buying in after such a strong run. Nasdaq will eventually reach a new all-time high but it will take at least a couple of years and in the meantime we could experience a lot of volatility.