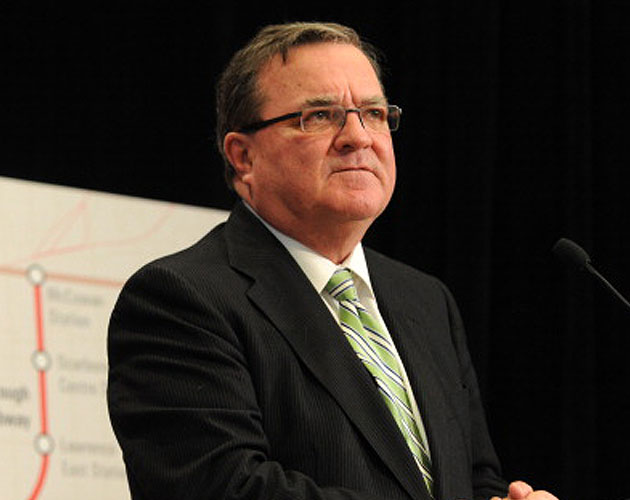 Former finance minister Jim Flaherty will get a state funeral next Wednesday.

The honour is normally reserved for sitting ministers, but the prime minister can offer the distinction to the families of eminent Canadians.

Jack Layton, the late NDP leader who was the head of the Official Opposition when he died in August 2011, was given a state funeral and lying-in-state in Parliament Hill’s hall of honour.

Flaherty died of a heart attack Thursday. Colleagues, including opposition MPs, are remembering him as a generous friend who could spar heatedly with someone in Parliament and later laugh over a drink outside the House of Commons.

Flaherty died of a heart attack on Thursday. He was 64.

“We appreciate that he was so well supported in his public life by Canadians from coast to coast to coast and by his international colleagues,” the family statement read.

Flaherty, who stepped down on March 8, suffered from a rare and painful, but treatable, skin disorder. However, he stated that his health did not play a part in his decision to leave politics.

He had the distinction of being one of the longest serving Canadian finance ministers and the only one to serve under Prime Minister Stephen Harper.

A Conservative MP for the Toronto-area riding of Whitby-Oshawa, Flahery was first elected in 2006. In his resignation statement, he said that he was most proud to be part of a government that lowered corporate taxes to the lowest level in the G7, introduced the tax-free savings account, and reduced taxes 160 times.

Flaherty also served as an Ontario MPP from 1995 to 2005. He served as deputy premier, minister of finance, attorney general and minister of labour.

Born in Lachine, Que., Flaherty attended Princeton University then law school at Osgoode Hall at Toronto’s York University’s and worked as a lawyer for 20 years before entering politics.

We are staying on this story and will update as more details are known.