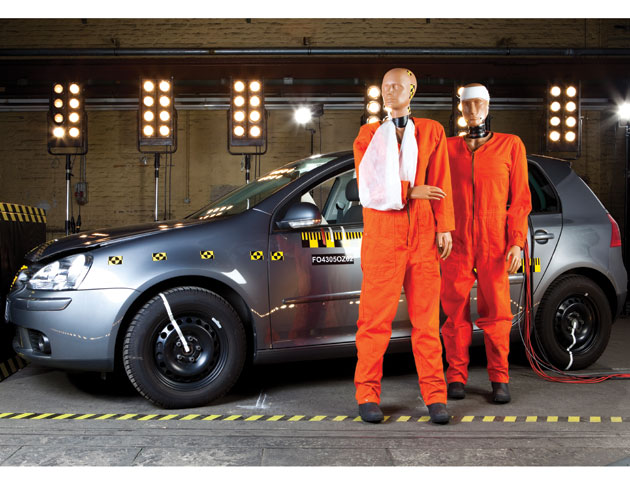 Crash! My head snaps back at the sound. I see the front-end of the vehicle crumple into the wall, the driver flung violently into the steering wheel. No one rushes toward the car. Instead, there are a few cheers and some clapping.

I’m inside Ford’s testing facility in Dearborn, Mich. It’s a rare opportunity to see them conduct a crash test on one of their vehicles, part of the rigorous testing they – and all other manufacturers – conduct to ensure their cars exceed safety regulations. If you don’t think safety is a big concern, just look at the negative impact of recalls. General Motors recently went through a massive fiasco, which saw the automaker recall nearly five million cars (many with an ignition switch issue that GM knew about for years), lose consumer confidence as well as up to $3 billion in shareholder value.

Transport Canada outlines vehicle safety standards for automakers, but that doesn’t mean you’re comparing apples to apples when deciding between vehicles to purchase.

The Insurance Institute for Highway Safety (IIHS) is an independent nonprofit organization that conducts thorough tests that go well beyond government regulations: Two frontal crash tests, one to replicate hitting a vehicle and another an object such as a tree; Side crash test with a SUV-like barrier; A roof strength test to determine safety during a rollover; Head restraints and seats test to understand potential whiplash injuries during a rear-end collision; Front crash prevention tests that take into consideration such technologies as forward collision warning and auto-brake systems that help avoid crashes.

Each car receives a rating of Good, Acceptable, Marginal or Poor for each crash test, and Basic, Advanced or Superior for the front crash prevention test.

Although IIHS is an U.S. organization, its methods are so thorough – and awards so sought after – that Canadian automakers use its ratings to tout the safety of their vehicles. And it should give you an added sense of relief if your vehicle-to-be gets the IIHS stamp of approval.

For a list of car models in each segment that were awarded the IIHS 2014 Top Safety Pick+, go to www.iihs.org/iihs/ratings/TSP-List.