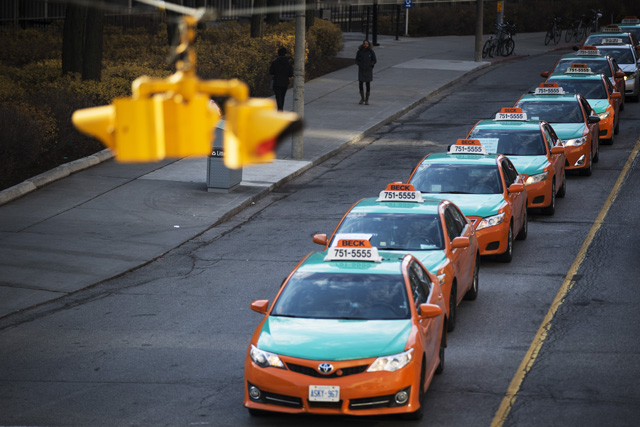 They were supposed to offer fair and balanced solutions to allow traditional taxis and private ride-sharing services like Uber to co-exist in Toronto, but instead proposed new regulations put forward by the city today seem to have only added fuel to the debate. While some city councillors, like Josh Matlow, chose to reserve their comments until a thorough discussion of the regulations is complete — “I look forward to reading the entirety of the proposed vehicle-for-hire regs,” he tweeted, “and ask questions, before commenting,” — others were quick to deride the plan.

“We are allowing Uber to get away with murder; no licensing, no marking, no plates — nothing,” city councillor Jim Karygiannis declared after the new proposed legislation was revealed. Fellow councillor Janet Davis echoed those sentiments, warning, “What we see here is a package of deregulation and self-regulation in which we have abandoned [taxi] drivers and I believe safety and the interests of the public.”

Both councillors stand in stark opposition to Mayor John Tory, who released a statement saying the proposed regulations, “create a level playing field, provide safe, convenient options to our residents and allow drivers to earn a competitive living,” while creating “a regulatory environment that protects drivers and allows companies to fairly compete.”

Essentially, the regulations propose that Uber, as well as other private vehicles that conduct a similar service, would be regulated by a separate licensing class, known as a Private Transportation Company. There would also be amendments to the requirements and sale of ambassador and standard taxi licences.

When it comes to licences, cab drivers would pay $290 annually. Uber would pay an initial $20,000 for each new car in their service, while drivers would be charged $10 annually and then pay 20 cents from each fare to the city. All drivers will have to undergo criminal background checks but while the city conducts the checks for taxis, Uber would be responsible for their own drivers while the city keeps an eye on ensuring that they comply.

Taxis would retain the right to “street hails” with Uber and other services forbidden from picking up passengers without being called. The base fare for taxis, meanwhile, would become flexible, with cars being allowed to discount the fare if they choose. They cannot charge more, however, than the current base fare of $3.25. However, Uber’s surge pricing – charging extra during peak hours or, for example, when there’s a subway breakdown and thousands of people are stranded – would remain at the company’s discretion. Taxis must still be inspected at city-operated garages semi-annually, though there’s the possibility that could change to any garage deemed fit by the city, which is the same requirement placed on Uber. Uber inspections are required annually.

As well, $2 million liability coverage would be required for all vehicles, from cabs to Uber cars and limos. For the full list of proposed regulations, click here.

Representatives of the taxi industry echoed the sentiments of councillors Karygiannis and Davis, with The Globe and Mail quoting Sam Moini, the head of the Fleet Operators Association and a taxi operator who feels the new regulations are so unbalanced that, “Just by looking at it off the top of my head, I don’t think that there will be a taxi industry [in Toronto].” City councillors will debate the proposed regulations and make their final vote in early May. Cab drivers have protested and threatened further protests in recent months and it’s unclear if these new regulations will spark further action. Uber, meanwhile, has yet to comment.