Blueprint For An Age-Friendly Home 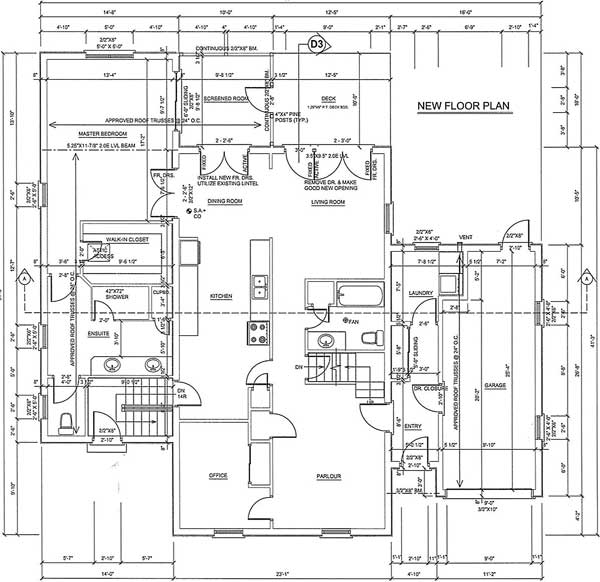 At some point your home may not be as welcoming. Here, Jayne MacAulay makes plans to turn her home into a one-level, easy-to-live-in-forever home.

As shingles, studs and boards migrated from our sagging garage to the dumpster in our driveway a couple of years ago, my husband, Ted, began to wear a slightly triumphant expression. It was his first salvo in a campaign to persuade me to commit to a plan to turn our house into a one-level, easy-to-live-in-forever home.

He’s been remarkably patient, I mused then.

We bought the small one-and-a-half storey house in Uxbridge, Ont., 24 years ago. “The house is too small for your family, but the seller is an artist and it’s full of light and her paintings. You have to see it,” my real estate agent had insisted.

It was love at first sight. The sellers had extended the original in-town cottage into the nearly half-acre lot and trimmed it with high pine baseboards and built-in hall cupboards. My two young girls readily agreed to share the master bedroom with its compact half bathroom. Ted and I took the smaller one. Ceilings sloped; a shelf and a steel pipe created open closets for both rooms. Ted moved his books and desk into a small bedroom on the main floor. The place wasn’t perfect, but it felt like home.

And yes, clutter has been an ongoing problem. “Wouldn’t it be nice to have storage space?” we’d ask each other periodically. After the girls moved on to university, marriage, careers and babies, we began to talk about tailoring the house to be a comfortable, safe and welcoming “what if?” home. (For example, what if one of us can’t do stairs?)

“I want my office, a master bedroom and laundry on the main floor,” Ted said. “That way, we should never have to move.”

I couldn’t argue with that. We like the house, the town and our neighbours. Rodine (Ronnie) Egan, 90, who lives next door, graciously offered storage space in her garage for our junk. (We tore down her old pigpen along with our decrepit garage.) Ronnie is also the keeper-of-the-Kerry while we are at work. Finn McCool, our Kerry blue terrier, waits anxiously for her key in the door and her invitation to spend the day at her place. Climbing stairs has become a challenge for Ronnie, so changes to our house had to include a no-step entrance.

In fact, even a few steps keep people in wheelchairs and scooters from visiting friends and family so “visitability” ranked highly on my list of must-haves. (It adds little cost if done when building a new home or an addition like the one we would eventually undertake.) The term simply means that someone in a wheelchair can easily come into a house and, if needed, can use a first-floor bathroom. Besides offering dignity to someone with a disability, there’s a bonus. Three-foot-wide doors, wide hallways and a zero-step entrance make moving furniture and appliances a snap. (It’s great for the hulking strollers favoured by our daughters and sons-in-law today, too.)

We talked sporadically about what we wanted. I’d futilely ask Ted, “How big a space do you need for a desk and bookcases? How much for your hockey gear?” (I was sick of it drying in the front room after a game.) I desperately wanted a place for everything – and the final exterior to look organic and unified, as if it had always been there and not “added on.” I wanted to feel pleased when I drove up and parked in the drive. So in the summer of 2009, I insisted on consulting an architect.

He suggested pushing the back of the house into the yard, enlarging  the living-dining room. A new dining room would go on the north side, and a garage, laundry room, master bedroom and bath would replace the deteriorating enclosed porch on the south side. That made for a virtual Berlin Wall between Ronnie and us. Worse, the plan had no screened porch to fulfill my dream of enjoying a summertime glass of wine outside in spite of mosquitoes.

I had thought it would be smart to allow for a roughed-in full bath upstairs to increase resale value in the distant future, but I couldn’t picture the space created by a changed roof. I went so far as to construct a model based on the plans. Too inaccurate, it only increased my frustration.

When we finally had a tentative design, our builder did a cost estimate. We felt it was beyond our budget. Disappointed, we paid off the architect and wondered, “Now what?” To his credit, Ted never held that waste of our money against me or said, “I told you so.”

Feeling stymied, I became hooked on the Home and Garden TV channel. I even bought home-design software, but the program didn’t seem to allow for the concept of a one-and-a-half storey building, so again, I couldn’t visualize the roof configuration.

Finally, in the summer of 2011, Ted mentioned that Ron Doble, our builder, had a designer he thought would be able to help. Two weeks after Dan Wiederhold of Provincial Drafting and Design Ltd. met with us and did the necessary measurements, he emailed a layout. The plan included a garage, laundry room and new entrance on the south side, and master bedroom, walk-in closet and bathroom on the north side but no changes to the second floor. The roofline of the additions, at 45-degree angles from the old structure, would make them seem part of the original. I was thrilled to see a screened porch. We met with Dan once more to tweak it and bingo! We had lift off, Houston.

This is not to say that we came up with the ideal house in which to age. We never did take enough time to figure out smart steps for making the addition truly adaptable for the infirmities that can happen through birth, accident or illness. As a member of a Home for Life committee in Edmonton, architect Ron Wickman has been developing a checklist of standards for accessible housing. Adaptability, he notes, is a step up from visibility and one he’d like more builders to consider.

In a new-built home, he would stack a set of closets that could be converted to an elevator shaft. In our case, he would have lined the bathroom walls with plywood under the drywall to allow for placement of grab bars anywhere suitable for a particular disability. Our shower should have been curbless. “Treat the bathroom as one big wet room, and it’s forever flexible,” he says. “Most of us don’t want to think that as we age we might not be able to get in or out of a bathtub. If the curbless shower could be marketed as an item of luxury, then I think people would buy into it.”

I think our house has met the visitability goal and is close to hitting the mark for adaptability. (We hope we won’t need it to progress to the full accessibility stage, with a kitchen fully adapted for one of us cooking from a wheelchair.) Wickman says universal design, the committee’s final stage, aims to include everyone, not just the average person. It means going beyond the wheelchair and considering limitations such as poor vision and hearing loss.

Ironically, a month or so after construction started, I had an accident that shattered my arm at the shoulder. Fortunately, it’s healed, but it illustrated dramatically how abilities can change, sometimes forever. (Weirdly, this helped our construction. I couldn’t drive then, so I worked from home and was immediately available when the builder needed any decisions.)

RELATED POST: Libby Znaimer on the Woes of Renovating

Winter held off long enough to get the basement poured and the addition framed and enclosed. Orchestrated by Ron Doble Construction, tradesmen showed up at the appointed times and by the end of April, most everything was painted and done – all with minimal disruption to us. Ted and I toasted its completion with a glass of wine on the screened porch. Having witnessed all the construction, we know we got our money’s worth through a reliable and knowledgeable builder. Admittedly, I did overspend on the bathroom, especially on a two-sink, quartz-topped custom vanity, a large glass shower and European fixtures. (It seemed so perfect, in fact, that it took us a while to move in and start using it. But I’m happy – comfortable and stylish, it’s my favourite room.)

We’re perfectly capable of climbing stairs – and do – but we’re liking the convenience of everything we need on one floor. It also feels good to know that Ronnie now finds it easier to get to the front door to fetch our excited Finn. But honestly, the old part of the house now seems shabby. The kitchen needs updating, and the landscaping could use a redesign. We’ll think about the options but, without a leaning garage to furnish some incentive, will we ever make some plans? I’m betting we will. Soon. Someday. Stay tuned.

We decided it made sense esthetically and practically to add to both sides of the house and, fortunately, it didn’t seem to add a whole lot more in expense to do this. But what would it be like on our good-sized lot? With plans in hand, my husband and I mapped out the proposed addition with garden canes and surveyor’s tape to get a sense of its size. We also measured and realized the bathroom windows were just too long (I had wanted them to match the size of the bedroom windows), wasting energy and busting our privacy. Even with the layout in hand, I ended up buying too many door handles. A mild winter aided and abetted the construction process, and we started having dinner in the not-yet-screened porch before the mosquitoes arrived in the spring.

The expectation of living independently into extreme old age is shared by many people 45 and older. Check out 33 dwellings planned for this possibility in Unassisted Living: Ageless Homes for Later Life by Wid Chapman and Jeffrey P. Rosenfeld (Monacelli Press). Most of the owners intend to remain deeply engaged with family and community, stay fit and active and wanted homes as green/sustainable as possible.

Patricia Moore, an American gerontologist and designer suggests homeowners use “the great whiz-bang of science” (modern technology) when planning a new or renovated home. Home improvement stores such as Lowes can offer advice and choices, she says.

“Design is the ultimate prosthetic,” she adds. In other words, a well-planned living space serves the needs of the people who live there, regardless of age or varying ability. Architect Deborah Pierce illustrates this principle in The Accessible Home: Designing for All Ages and Abilities (Taunton Press), revealing creative solutions for many personal circumstances. Comfortable and beautiful – her homes prove form and function can happily co-exist.

Is your home energy efficient?