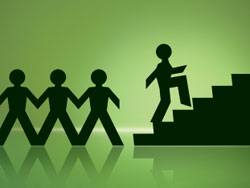 If you’re looking for a promotion at work, it turns out that January is the best time. But if you didn’t move up the ladder last month, career advisers recommend starting to plan for the next big opportunity in April.

Professional networking site LinkedIn analyzed the job histories of its 90 million members worldwide, including three million in Canada, to chart when moves up in rank and authority are most likely to occur.

In Canada, the peak month for promotions is January, followed by April and September. The survey found that in Canada and most other countries, August is the least likely time to get a promotion, unless you are in education or retailing, where managers are preparing to gear up for the fall.

This is also essential information for people who want to make a career change, because these are months when job shuffles will create openings.

The timing is most likely because of the budget cycles that organizations have. Many employers are on a calendar fiscal year, so they have a fresh budget to work with in January. Others work on a quarterly basis which is why April is the next best opportunity.

Libby Znaimer, a prominent Canadian journalist specializing in business, politics, and lifestyle issues, is producer and host of The Zoomer Report, a special feature on topics of interest to baby boomers and the 50+. It covers everything from health and wealth to leisure and volunteerism, from the special vantage point of the generation that has changed society in its wake. Ms. Znaimer is also Vice-President of News and Information for Classical 96.3FM and AM740. Her first book, “In Cancerland – Living Well Is The Best Revenge” – was published in October 2007 by Key Porter.