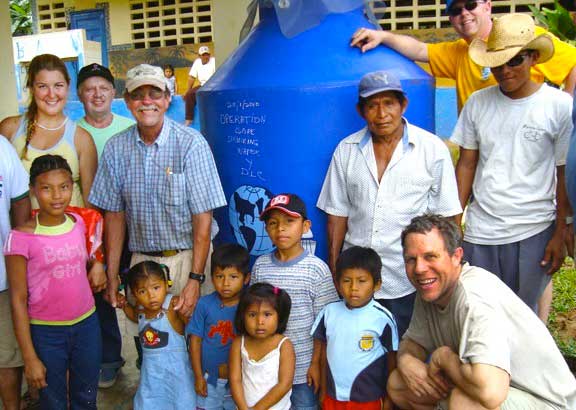 A few miles off the Caribbean coast of the country of Panama, just southeast of the Costa Rican border, lay the picturesque islands of Bocas del Toro. These palm-tree laden isles ringed with white sand beaches hold a dark secret. The archipelago is situated in a lush rain forested region where hundreds of inches of rain fall each year, yet many of its indigenous residents have no access to safe, potable water as they do not have the monetary means to catch and store it properly.

Residents often access water from streams near their villages. However, people and animals upstream pollute it. By the time the water reaches consumers in low-lying areas, it is contaminated with human and animal waste. Also, the water collects in holes near schools and quickly becomes muddy and unusable.

During a vacation to the islands in the spring of 2008, retired American Joe Bass and his wife Maribel, a native of Costa Rica, came across a clinic run by a visiting medical worker from the U.S. The volunteer was busy treating a teenage boy who was afflicted with a dreadful skin disease. The boy was in agony and the medical worker could do little to help him.

Said the man, “See this boy? I treated him last year. I’m treating him now, and I’ll probably have to treat him again when I return next year. It’s all because of polluted drinking water. He has no alternative but to drink foul, disease-ridden water.”

“But can’t something be done to help these people?” asked Bass. The medical worker replied, “If you want to do something, help them get safe water. They need that more than anything else.”

According to the U.N., eighty per cent of all illness in many developing countries is due to unsafe drinking water, and each year 1.6 million children die because of it. These heart-stopping statistics are why Bass and his wife Maribel transplanted themselves to these remote islands and founded the philanthropic organization Operation Safe Drinking Water (OSDW).

Thriving on a commitment to live among the people they are helping and working to bring those overwhelming U.N. statistics down, the couple began to build the charity from the ground up by soliciting pro bono legal, accounting and other professional services. OSDW is a registered 501(c)(3) charity and has a vibrant website that is continually updated with information regarding their ongoing work. The charity’s primary focus is to set up simple rain-catchment systems that are replenished with safe water every time it rains. They’re simple, low-maintenance and have only one moving part — the faucet. The couple began by launching a boat-based first-aid initiative throughout the islands.

“It was heartbreaking to see so many innocent lives being lost because something as basic as clean drinking water was not available,” says Maribel.

“While Maribel helped people who were sick, I focused on prevention — setting up rain catchment tanks in schools,” says Joe. “This way the children get to drink good water and the entire village has access to the safe, clean water from the school tank.”

Like their neighbours, the couple lives “off the grid”. Rain catchment tanks supply their own water and electricity comes from solar panels. Working 12 hours a day, six days a week when most people prefer to slow down, Bass, now in his mid-seventies, often takes part in the rugged, physically demanding work such as hauling tanks and installation supplies up mountain trails to remote villages far off the nearest road.

Hard work in difficult terrain is not something new to Joe. He had previously done a lot of volunteer work in several parts of Africa, albeit as a younger man. Maribel guides the installation projects in the field, and her fluency in Spanish enables her to speak to the residents in their native tongue and uncover their most important needs, which has instilled their trust in her. Their island base is located between two major indigenous villages, and Joe personally drives the only ambulance boat in the area, rushing critically ill people to the nearest mainland hospital whenever needed, even for a snakebite in the middle of the night.

The all-volunteer OSDW is funded by donations and some times even Bass himself, in order to ensure that tank installations continue weekly, all the while raising the number of residents that have access to safe water. OSDW welcomes individuals and groups to make the journey to Panama to assist with installing rain catchment tanks. This offers volunteers a unique opportunity to have the priceless memory of traveling to Bocas del Toro to lend a hand and meet the families that are benefiting from their generosity.

Volunteer groups of up to 15 stay for as long as a week in a dormitory at the base and help to install rain-catchment tanks, disburse donated reading glasses and medical volunteers conduct free clinics. Volunteers have included college students from Quebec, farmers from Iowa in the U.S. and visitors from other parts of North America, Europe and Australia. Some volunteers have found the experience so fulfilling they have returned to assist OSDW more than once.

By partnering with Mother Nature and following the motto: Catch, Store and Share the organization is making great headway. Joe recently announced the installment of OSDW’s 60th rain catchment tank, at a mountaintop village. He climbed through ankle-deep mud to assist with the set up. Now nearly 20,000 residents have access to clean, disease-free water. The proof is in the numbers. The very first tank was installed at Bahia Grande School on the island of San Cristobal. After two months the principal reported the rate of absenteeism from sickness dropped from a whopping 75 per cent to just 10 per cent. Operation Safe Drinking Water, where the gift of life is given again and again — every time it rains.

To contact Joe and Maribel Bass and learn more about OSDW, please visit: http://www.operationsafedrinkingwater.org. Their contact number in the U.S. is (805) 444-8534.

About the author: Adrienne Ochenkoski’s background is in television as a full-time producer and writer. Since relocating to Panama in 2007, she has created advertising for print and on the web, and she also is an accomplished photographer and videographer. Her website may be found at www.purelifemedia.com.