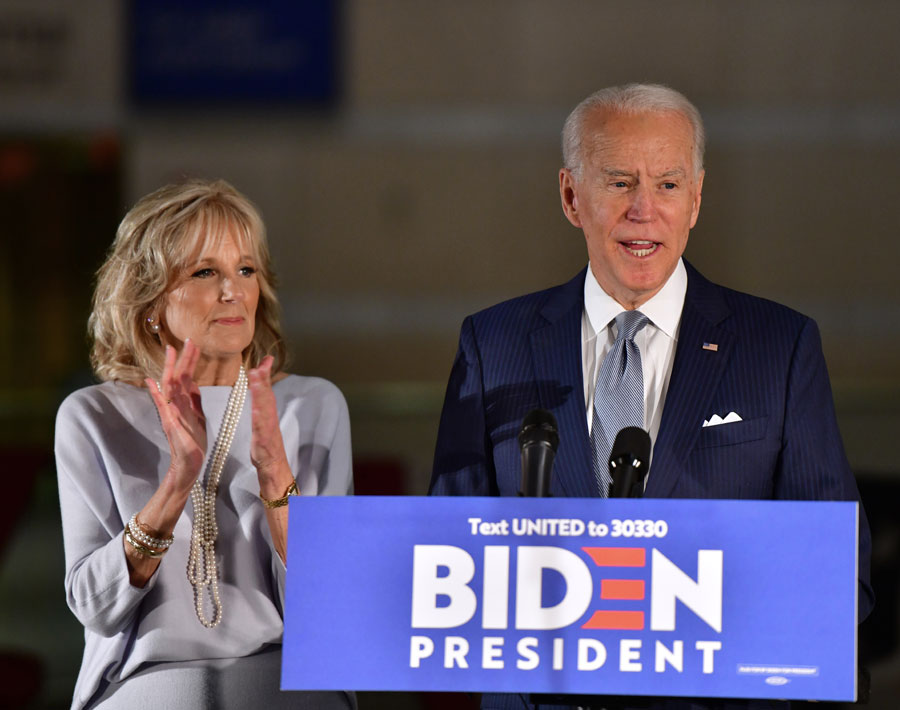 How great is it that the comeback kid of the moment, the wunderkind of American politics, turns out to be a 77-year-old former has-been.

“A miracle,” exclaimed New York Times pundit Frank Bruni, barely resisting the word “resurrection,” but suggesting nevertheless that Joe Biden has come “back from the dead.” The Boston Globe likewise described it as “Lazarus-like.”

After  poor debate performances, lacklustre stump speeches, losing  the first two primaries badly and coming in a distant second in the third, the seemingly indomitable Biden shocked and amazed everyone, including himself, as he roared ahead of the pack on Super Tuesday and became the frontrunner for the Democratic Party nomination for president of the United States.

He scooped up delegates, winning  10 of the 14 contested states, including those no one could have predicted: Texas, Virginia and  Massachusetts. Last night on Super Tuesday II,  he dominated Michigan, Missouri, Mississippi and Idaho, putting him ahead in the delegate count. Unless something catastrophic happens, such as a poor performance in Saturday’s Arizona debate with Vermont Senator Bernie Sanders – who took North Dakota last night – it’s Biden’s to win. This is even though California, which is still being counted, went for Sanders, his only viable opponent for the top of the ticket.

It’s Biden’s third try for the nomination in 32 years and the first time he’s won anything, anywhere, on own, except for his Senate seat.

Sanders, of course, is no spring chicken either. At 78, he’s got a year on Biden. As one late-night host put it, the choice now is whether to vote for an old man or an older man.  Come the general election in November, one of them will be  running against the incumbent toddler-in-chief, Donald Trump, who  is indeed the baby of the bunch at 73.  Does it mean that being 70 is no longer over the hill but rather occupying its peak?

In Biden’s case, it means exactly that. And how he got there — overcoming a stutter, the political blunders, the gaffes, the family tragedies and the brain aneurysms — is a big part of who he is. Because in the end, what mattered most is Biden’s resilience, his refusal to be defeated.

Instead of seeing Biden as a washed-up loser, voters obviously value his ability to bounce back time after time, hanging in there year after year, decade after decade, when all seemed lost.

If Donald Trump is the American id on steroids, the consummate volatile bully and ruthless unrepentant capitalist, Joe Biden is the other side of the coin: decent, empathetic, steadfast, earnest, big-hearted, an ordinary Joe. As Biden tweeted on Feb. 28, “My Dad always said, ‘Champ, when you get knocked down, you get back up.’ I’ve been knocked down a lot in my life, like so many Americans have, but always get back up.”

A String of Setbacks

A week before Christmas in 1972, senator-elect Biden learned his wife and 18-month-old daughter had been killed in a car accident and his two young sons were seriously injured. A moving photograph shows him  being sworn  into the House of Representatives at their hospital bedsides.

As a single father and newly elected senator, he took the train home to Delaware from Washington every night to be with his sons, earning him the affectionate moniker Amtrak Joe.

He married his second wife, Jill, five years later and their daughter Ashley was born in 1981.

During the 1980s, Biden had surgery twice to repair aneurysms in arteries that supply blood to the brain. (He has released his medical records, unlike Sanders, who suffered a heart attack in October 2019 and has yet to produce more than a letter from his cardiologists avowing he is fit to run for office.)

Then in May 2015, his eldest son Beau, an army veteran who was attorney-general of Delaware and his father’s political heir, died of brain cancer.  In 2017 it was reported that Biden’s surviving son, Hunter – who has battled addiction – was having an affair with Beau’s widow.  Hunter’s wife initiated a divorce after the news broke, accusing him of blowing the family’s money on hookers, strip clubs and drugs. Hunter’s incongruous and lucrative position on the board of a Ukraine energy company, even as the former vice-president was leading an international coalition to battle corruption there,  has been used by Biden’s  political enemies to smear his father.

The voters thus far aren’t buying it. The political blunders and the baggage that Biden carries after a long career in Washington, such as plagiarism incidents that forced him to drop out of the 1988 race, have faded in significance. His electability argument – that he is best positioned to beat Trump in the general election – strengthens with every win.

For instance, as #MeToo took hold, he was criticized for being too touchy-feely with women and invading their personal space, as memes of him doing just that circulated on social media, adding a creepy quotient to his Uncle Joe persona.

“I’m a hugger of both men and women,” he responded. “As it turns out that those are taken in an offensive manner, I need to have a greater sense of awareness of what I am doing, and we will correct that.”

But that wasn’t all. As chair of the Senate Judiciary Committee, he was in charge of the 1991 Clarence Thomas U.S. Supreme Court confirmation hearings. Bending over backwards to be fair to Thomas, he pretty much threw witness Anita Hill, a young African-American woman, to the wolves after she accused Thomas of sexual harassment. Hill has not accepted Biden’s non-apology apology that came decades later. Biden supporters often tout his 2017 public service announcement with Lady Gaga in support of survivors of sexual violence and the fact he wrote the Violence Against Women Act as part of the  1994 crime bill that he steered into law.

But the crime bill, which has led to mass incarcerations, has come  back to haunt him, putting a dent in the younger generation that is part of electoral firewall – the Black vote.  Early in this campaign, Biden was attacked by senators Cory Booker and Kamala Harris, two African–American contenders for the Democratic nomination,  for his 1970s position on the controversial practise of busing and his statement that, back then, he sought to work with segregationist senators “to get things done.” After Biden was trounced in two states with little diversity – Iowa and New Hampshire – and came  a distant second to Sanders in the third, Nevada,  his political obituary was all but  written.

Then civil rights hero and African-American  South Carolina Congressman Jim Clyburn stepped in with a powerful endorsement  of the beleaguered candidate. “We know Joe, but most importantly Joe knows us,”  he said, which delivered Biden’s blow-out victory. He won two-thirds of the Black vote, which makes up 60 per cent of Democratic primary voters. All ages broke for Biden, proving how potent the Obama legacy still is. The pair’s legendary bromance got off to a rocky  start when Biden described the then-junior senator from Illinois as “the first mainstream African-American who is articulate and bright and clean …”

No drama-Obama was unbothered enough to pick Biden as a running mate, as he could deliver the white, working-class vote in states like Wisconsin, Michigan and Pennsylvania. This bloc of voters were part of the historic coalition that swept the Obama-Biden ticket  into office in 2008 and 2012, but who voted for Trump in 2016, which cost Hillary Clinton the electoral-college win and the presidency.  He “had Obama’s back,” is the most-cited rationale for his willingness to work under a Black boss, and endeared him to generations of African-Americans.

Voters of every background seem to crave a return to normalcy – to view the Trump administration as a hiccup in the historical time line – and the continuity of the last widely approved president’s administration would restore America  to a less divisive, chaotic present.  Washington experience may not seem such a negative now, but the fundamental  decency of the man himself, who wears his empathy on his sleeve, is also key. Every former rival, from  Congressman Beto O’Rourke to former mayor Pete Buttigieg and Senator Amy Klobuchar, who dramatically endorsed him the night before Super Tuesday, have mentioned it. Yesterday, both Booker and Harris – who Biden hinted could be his pick for VP – endorsed him too.

With the Democrats determined to rid the country once and for all of Trump and his thugs, with their rally to pragmatism and the politics of the centre, it seems big-hearted, gaffe-prone Joe Biden is the right man in the right place at the right time.

When the time is right, it’s never too late.