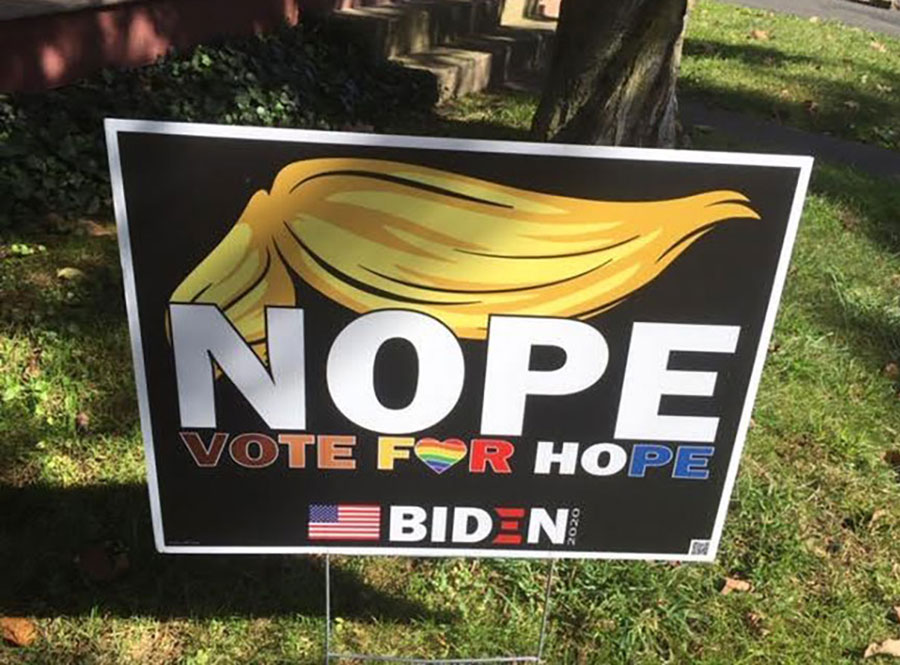 Journalist and expatriate Johanna Schneller is stationed in her hometown of Easton, PA, where she's volunteering for the Biden-Harris campaign in hopes of making a small difference in the swing-state that Trump won by a small margin in the last election. Photo: Johanna Schneller

Four years ago, noted journalist, Zoomer contributor and U.S. citizen Johanna Schneller watched and railed and tweeted as Donald Trump beat Hillary Clinton to be named U.S. President. This year, she decided she couldn’t sit the election out, so she headed back to her hometown of Easton, in the swing county of Northampton and swing state of Pennsylvania, to do what she can to help Joe Biden’s campaign. This is the first of  her dispatches from the U.S. ahead of the Nov. 3 election.

Driving through a sea of Trump signage last Sunday, wending my way south on rural roads through New York state and into Pennsylvania — where I’ll be spending a month doing what I can to get Joe Biden elected president — I kept seeing one that genuinely puzzles me. It reads, “Trump: No More Bullshit.”

I’ve been making this drive at least once a year since 1994, when I moved to Toronto (I grew up in Pennsylvania, and I’ve kept my U.S. citizenship). Four years ago, I did not pass a single Hillary Clinton sign in seven hours. This time, I did see a few Biden signs. A few. All were planted on front lawns at a discreet ankle height, just a white background, the names Biden and Harris in blue block letters, and the E rendered in red stripes, to oh-so-gently suggest the American flag. If the signs had a collective noun, it would be a murmur.

The collective noun for the Trump signs, on the other hand, would be a shriek or a clamour or a cacophony. There weren’t just signs, there were banners and buntings and flags. They were draped across houses, tacked to barns, hung on wires over driveways, unfurled in the window of a snowmobile dealership. They didn’t read simply “Trump,” they read, “All Aboard the Trump Train,” and “Make Liberals Cry Again,” and “Trump No Man No Woman No Commie Can Stump Him.” That latter one sports an image of Trump’s head on an absurdly pumped Rambo body. He holds a rocket launcher; an American flag scarf wrapped around his head flutters down to his enormous veiny delts. If you order it today on Amazon for $9.99 U.S., it will arrive Sunday Oct. 18.

But the “No More Bullshit” thing — how does that work in these voters’ minds? They are voting again for Trump, because they’re sick of the bullshit from… Trump? I know he and his base thrive on outsider energy, but they are aware that he is the incumbent here, right? Perhaps they’re collectively pretending that away, the way they have with so many things in the past four years.

I’m here because I’ve spent every night since Trump was elected yelling at the news until my hair catches fire. In 2016 I voted, of course, and I sure did tweet a lot. This year, I could not sit this one out.

The U.S. votes by county, so I’ve come to the one where I grew up, Northampton County, in archetypal Pennsylvania. Its 980 square kilometres contain three small cities (Allentown, Bethlehem, Easton); three universities; rich and not-rich suburbs; and tracts of farmland. Its 300,000-some inhabitants are mostly white, with a growing Hispanic population. It was thriving, then it was desperate — Bethlehem Steel, one of the largest mills in the world, began declining in the 1970s and finally dissolved for good in 2003. Its derelict buildings, which once roared for a mile along the Lehigh River, are now a Sands casino. The county used to be the cement capital of the world; those plants are shuttered. Ditto the former Dixie Cup factory, which developers keep promising (and failing) to turn into condos. Recently, though, it’s been on the rise again, because new highways connect it to jobs in New York City and Philadelphia.

Politically, it’s purple — the definition of a swing county in a swing state. Since 1952, it has voted for the winning president. It voted twice for Obama and once for Trump. It is, as they say, in play. For extra drama, PA is one of the many states that won’t begin counting mail-in ballots until 7 a.m. on election day, Nov. 3. We may not know how PA has voted for 24, or 48, or 72 hours. If — my worst fear — we’re even allowed to open ballots that long before Trump somehow shuts it down.

Growing up here, I was indoctrinated with all the rah-rah, American exceptionalism fervour you could imagine. Now that I’ve lived in Canada — lived in the world — for the past 30 years, I am more than aware of the flaws.

But I cling stubbornly to the ideals. I want the U.S. to be the place it proclaims itself, where people are treated equally, where anyone has a shot at becoming the next big thing, where everyone has at least enough. I believe that tripartite governance — executive, legislative and judicial branches, each independent, with equal powers, checks and balances — is a thoughtful, workable system. The shining city on the hill hasn’t been built, but the blueprint is viable.

When I was a kid, Democrat versus Republican was a palpable divide — a lot of different divides, generational, economic, aspirational. But everyone watched the same news on one of three networks, ABC, CBS or NBC. We got the same information. We agreed that facts were facts, that certain rules should be abided (publicly, at the very least), and that a level of civility should be maintained. The speed and thoroughness with which Trump detonated that shocks me, still, to my core. I didn’t realize how democracy hangs by a thread, how it just takes one person to say “Nope, don’t wanna,” and it all goes poof.

I’m also fascinated by what Trump’s supporters see when they look at him. My parents were Republicans, as were many of their friends. Not one of them would have been fine with a president who puts kids in cages, or makes fun of disabled reporters, or scorns fallen soldiers, or commits sexual assault, or tells 70 lies per day — let alone all of those things at once. They felt, smugly, that they’d earned their privilege – but I don’t believe they would have supported a candidate who proudly proclaimed he would deny an undocumented child access to emergency-room care. I don’t think they would have cheered.

So I came here to make a stab at figuring out how this happened. I came to ask questions, to listen. And to try to fathom why two people who live side by side no longer agree on the definition of bullshit.